None of the Regular Rules Blog Tour

None of the Regular Rules
by Erin Downing

Read: February 23 - 24, 2013
Published: November 20, 2012 by the author
Source: Gift from the author in exchange for an honest review
Category: Contemporary YA 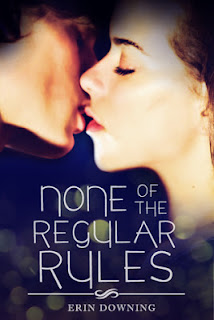 The weekend before the start of senior year, Sophie Erickson and her best friends, Ella and Grace, discover a handwritten list of dares tucked away in the glove compartment of Sophie’s beat-up old Toyota. But this isn’t just any list; it’s a dead girl's bucket list.Sophie's beloved aunt Suzy died as a teenager in a fatal fall, leaving Sophie with an overly cautious family, a few fading photographs, and a bucket of bolts that barely passes for a car. But now, Sophie has Suzy’s list of the things she wanted to do in her last year of high school. Sophie can't help but wonder: What would happen if she tried to fulfill Suzy’s last wishes, to live out the longed-for life of her aunt, her hero?As Sophie and her friends attempt to knock off the things on Suzy's list of dares, love blossoms in unexpected places and Sophie begins to feel that her life is finally coming together...when in fact, everything is slowly unraveling around her. When the truth about a long-held family secret threatens to shatter everything she believed to be true, Sophie is forced to question everything she knew about the life and people she believed in, and ultimately herself.

“I wanted to feel the pressure of trying something new – of risking something before we were thrown out into the world with a bunch of strangers and all of the security of home stripped away.”

Senior year is about to begin and Sophie Erickson has decided that she wants more from her life than her safe, parental-approved existence. She sees her future after high school stretching out before her with a big blank, impenetrable wall blocking the way, and she's ready to do something to change that. Instead of watching safely from the sidelines Sophie decides that this is the year that she will step out from the background and experience life. She wants to do something to define herself, but she’s not sure what that will be. Until she finds a hand written list of dares in her late aunt Suzy's car.

Sophie always looked up to her aunt, whom she saw as brave and the only person in her family willing to take chances and go after what she want. Although Suzy died tragically 10 years ago when she was in high school and Sophie was only 8, Sophie still feels a strong connection to her. That bond has never been stronger than now, when Sophie is entering her own senior year of high school and has inherited Suzy's car. When Sophie and her two best friends find the list of dares that her aunt wrote in high school, Sophie decides that she will complete the list to honor her aunt, but also as a way to step outside of herself and hopefully, discover who she is in the process.

None of the Regular Rules is a book about friendships. Although Sophie is the driving force behind committing to the list of dares, she wants to share the experience with her two best friends, Grace and Ella. It is Sophie's enthusiasm that makes them excited to participate. Grace is popular, athletic and a great student; Ella has an eccentric, artistic style, is a part of the yearbook crowd and wants to see the world after high school. Sophie in many ways is the balance between them, but each of the three girls is dissatisfied with something in her life. The three of them have been friends since childhood, and though they are are all different from each other, they have somehow been able to maintain a friendship throughout school. I really love that this is a book about a friendship between three girls. It is how many of my friendships have formed, and the story was more relatable because of it.

Sophie, Ella and Grace have known each other long enough to be able to read each others’ moods, call the other out when she is being idiots and also push each other’s buttons. During their senior year, their relationship will be tested by guys, misunderstandings and pressures at the end of high school. With the big changes of college – and expectations for the future – looming, they are still growing and learning how to relate to each other, they are also still having fun and challenging each other in the process. Sophie, Ella and Grace’s relationship is by no means perfect, but it is dynamic and that makes it real. It was refreshing to read a book that focuses on healthy, supportive girl friendships.

In addition to the focus on friendships, two themes that really resonated with me in None of The Regular Rules were perception and identity. How you perceive someone before you meet them can be very different than what they are like once you get to know them. We all judge others before we know who they are, or put people on pedestals only to watch them fall. This is never an easy lesson, but it is one that everyone learns - sometimes in more painful ways than others. On the flip side, is the concept of developing your own identity. Learning how to be authentic regardless of what others think is true about you (or want to be true about you), and regardless of whether you disappoint others in the process. It is never so important to learn these lessons than the end of high school, when your future is looming ahead, and when you have to make your own decisions about what that future looks like for you, regardless of what your parents or anyone else thinks. It takes a fair bit of bravery to do this, which is something that each of the three girls develops over the course of the book.

Of course a romance weaves its way through the story.  Featuring Sophie and her neighbor Johnny Rush, the love story is not the center of the plot, but fits into it nicely. While I will admit to being slightly disappointed in the way it progresses, it does feature some sweet and swoonworthy moments that I enjoyed. I wish we'd gotten to know Johnny a little better, and that he'd opened up to Sophie sooner. Despite his friendly, upbeat personality, he was not always forthcoming with information about himself and that made me suspicious about him.

None of the Regular Rules is a fantastic look at friendships, love and identity at the end of high school. Growing up and defining who you are doesn't have to mean loosing friends or leaving your past behind. And though trying something new can open yourself up to failure, it can also bring things - and people - into your life that you would have missed otherwise.

Purchase None of the Regular Rules: Amazon | Barnes & Noble 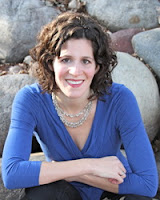 Erin Downing has written more than a dozen books for young adults, tweens, and kids. Her guilty pleasures include an unhealthy obsession with reality TV and cheesy romantic dramas (Revenge! Alias!), an addiction to Us Weekly magazine, and cupcakes.

Before turning to writing full time, Erin worked as a book editor, spent a few months as a cookie inventor, and also worked for Nickelodeon. Erin has lived in England, Sweden, and New York City, and now resides in Minneapolis, Minnesota, with her husband and kids.