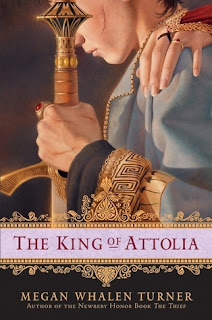 By scheming and theft, the Thief of Eddis has become King of Attolia. Eugenides (yoo-JEN-ə-deez) wanted the queen, not the crown, but he finds himself trapped in a web of his own making.Then he drags a naive young guard into the center of the political maelstrom. Poor Costis knows he is the victim of the king's caprice, but his contempt for Eugenides slowly turns to grudging respect. Though struggling against his fate, the newly crowned king is much more than he appears. Soon the corrupt Attolian court will learn that its subtle and dangerous intrigue is no match for Eugenides. (from Goodreads)

NOTE: The King of Attolia is the third book in The Queen's Thief series. My review contains SPOILERS for the first two. If you haven't read The Thief or The Queen of Attolia yet, you should probably not read below. See my spoiler free thoughts on those books HERE.

I have a confession. I was really worried about Eugenides' choice of brides when I finished The Queen of Attolia. Don't get me wrong, I love unconventional relationships. I am especially amazed when an author has the ability to make me like a character that I had previously despised. But by the end of The Queen of Attolia, we had seen very little interaction between Gen and Irene, and every second of it was strained. Not only was it impossible for me to get a sense of how they would work as a couple, but I'll admit that I was still angry at her for hurting Gen over and over again.

I know you can't always choose who you love, but I thought Gen made a particularly poor match in the queen. However, that's also one of my favorite things about Eugenides' character, the fact that people are constantly underestimating him and questioning his decisions. He proves them wrong every time. You win again, Eugenides.

The King of Attolia is told in rotating third person limited perspective. This time, instead of focusing on Gen's thoughts, most of the book is told to us by a palace guard named Costis. At first I was put out by this choice. I wanted to be in Eugenides' head, and find out from him how he was handling his new role as king. But the more I read, the more I believed that the book was stronger because of the way it was written.

As king Eugenides is in a very public role. How his subjects see him is essential to his reign. As a reader invested in this series, I know that Gen is always up to something. But the people of Attolia don’t know that, and through Costis we are able to see what they think about their new ruler. I also had many of the same questions that Costis wonders about Eugenides and Irene's relationship. Do they really love each other? Is Irene still intimidating Gen? Is Eugenides going to step up to his role as king? Getting the answers to these questions by watching Gen through Costis' eyes made the the answers more meaningful, because I could see how the new king affected those around him.


Eugenides and Irene are still an unconventional couple and very different from each other, but as this book progressed I was able to see the strength of their bond, and how powerful they are together. I especially I loved the few peeks we got into their private world. That isn’t to say their relationship (or either of them) is perfect. Irene comes across as cold and abrasive at times, and it's clear she's still struggling with guilt over what she did to Gen in the previous book. Eugenides on the other hand, appears uncomfortable with his role as king and continues to get on everybody's nerves.

“He whines, and complains, he ducks out of the most obvious responsibility. He is vain, petty, and maddening, but he doesn’t ever quit.”


As The Queen's Thief series continues, I love thinking about how we first saw Gen in The Thief and compare that to who he has become now. He is still so much the same person but has grown tremendously. Eugenides is never to be underestimated and truly is a force to be reckoned with.

After four books, I've become amazed at Megan Whalen Turner's abilities as a writer. The care and life she's breathed into Eugenides' world is visible on every page. She excels at using small, subtle moments to tell her readers important information, and has a brilliant mind for political strategy and intrigue. Often things are not what they seem, and everyone is somewhat sympathetic if you view the world from their perspective. That alone brings a complexity to this series that I rarely see.

I love The Queen's Thief series so much, and The King of Attolia is the best book yet. Do yourself a favor and pick it up now.