Early Review: The Queen of the Tearling by Erika Johansen 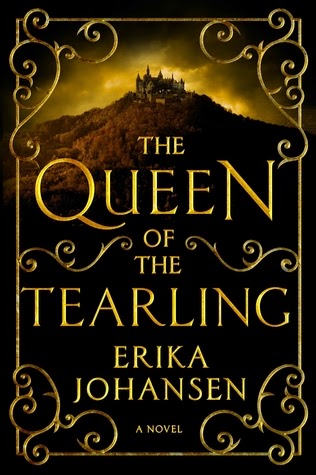 On her nineteenth birthday, Princess Kelsea Raleigh Glynn, raised in exile, sets out on a perilous journey back to the castle of her birth to ascend her rightful throne. Plain and serious, a girl who loves books and learning, Kelsea bears little resemblance to her mother, the vain and frivolous Queen Elyssa. But though she may be inexperienced and sheltered, Kelsea is not defenseless: Around her neck hangs the Tearling sapphire, a jewel of immense magical power; and accompanying her is the Queen’s Guard, a cadre of brave knights led by the enigmatic and dedicated Lazarus. Kelsea will need them all to survive a cabal of enemies who will use every weapon—from crimson-caped assassins to the darkest blood magic—to prevent her from wearing the crown.
Despite her royal blood, Kelsea feels like nothing so much as an insecure girl, a child called upon to lead a people and a kingdom about which she knows almost nothing. But what she discovers in the capital will change everything, confronting her with horrors she never imagined. An act of singular daring will throw Kelsea’s kingdom into tumult, unleashing the vengeance of the tyrannical ruler of neighboring Mortmesne: the Red Queen, a sorceress possessed of the darkest magic. Now Kelsea will begin to discover whom among the servants, aristocracy, and her own guard she can trust.
But the quest to save her kingdom and meet her destiny has only just begun—a wondrous journey of self-discovery and a trial by fire that will make her a legend…if she can survive.
___________________________________________________________________________

Kelsey has lived all her life in a sheltered cabin and its surrounding woods. She's had no friends or companions except for the two people who have raised her - Barty and Carlin, whom Kesley has loved like parents. Kelsey is the next Queen of the Tearling and for her own safety has been hidden until the age of ascension. But on Kelsey's 19 birthday, the Queen's Guards come to take her to the castle - called the Keep - where she will be queen. At least until she's assassinated or her uncle and acting Regent tries to overthrow her. Kelsey has been told little about her country or those that surround hers, and the more she discovers, the more she realizes the task and dangers ahead of her is far larger than she ever imagined. Especially with the sorceress Red Queen ruling the neighboring kingdom of Mortmense.

Overall I enjoyed this book a lot. I found the story to be extremely readable but complex, surprising in places and a promising start to a series. But I can also understand those who had problems with it. I think it all depends on how much the issues bug you as a reader.

5 things you should know before starting The Queen of the Tearling:

1) Chapter one is very long. I'm pretty sure the first chapter took up the first 10% of my ebook, and it was a little slow moving for me. But by chapter two the story begins to pick up, and it definitely kept my interest throughout. The story is mostly told from Kelsey's perspective, with some key scenes from other characters' POVs. This is not a Young Adult story, though Kelsey reminded me of a YA heroine. But The Queen of the Tearling is darker and more graphic in places, and I have a feeling it will only get more so as it progresses. I'm hopeful that Kelsey will grow along with the series, as she gets more involved in the ruling of her kingdom and faces off against the evil Red Queen.

2) Except for one detail, I really enjoyed Kelsey's narrative. Throughout the entire book, Kelsey obsesses about her appearance and body image. She worries about being plain and fat constantly. I like that Kelsey has insecurities and isn't the typical beautiful heroine. She also doesn't undergo any sort of makeover in the book. But her constant thinking about how she looks, felt like one note playing over and over again.  It was a little grating over time.

Despite that, I came to really like Kelsey a lot. She is naive in many ways, but she also has an intense desire to learn and fix her country. And she's not afraid to make bold decisions for what she believes is right, even when they have consequences. Her inner strength is especially present in stressful situations, and I admired that she was swift to make decisions when she needed to do so. I could definitely see wisdom and the potential for greatness in her, as well as a grounding because of how she has been raised. There is an intense political drama at play, with lots of opposing forces, both within Kelsey's nation and with neighboring kingdoms, and I'm excited to see more of that in the next book.

3) Answers to Kelsey's questions are slow to come, but they do come. When the book begins, Kelsey has lived all her life in a sheltered cabin with 2 other people who were thorough in her education but extremely limited about what they taught her about her country. When the Queen's Guard comes and Kelsey begins to travel through her kingdom, she starts asking questions - and continues to get few answers. The fact that no one will give Kelsey a straight answer about her kingdom or what she is facing, drove me crazy in the beginning of the book. But I eventually began to see the wisdom in why Kelsey was brought up the way she was. It allowed her to think out of the box her country has been in for so long, and I appreciated her different perspective. And thankfully, Kelsey does get real answers as the book progresses.

4) The world building and context for the story was interesting, but also very confusing. Kelsey's world is a mashup of historical-modern-fantasy-dystopian, set on a previously undiscovered continent that was colonized sometime in the world's future. In her society are chain mail, castles and feudal farming, as well as Harry Potter books and modern plumbing. There's also magic and science, and I'm quite interested to see how those concepts feature in future books. It was both a fascinating and rather strange mix of elements. I had many questions about the actual "undiscovered continent" setting while I was reading the book, and felt a little uneasy at the lack of clear information about it.

However, after I finished reading, I found the following on the Goodreads The Queen of the Tearling series page: "The story is set three centuries after a small portion of the human race has populated a landmass that mysteriously emerged in the wake of an environmental catastrophe." While reading, I was very confused at how a new continent could have been discovered somewhere on earth?! That one sentence clarified a LOT for me. I only wish the story had actually included that information. Although, I'm still not sure whether the rest of the world is present (have they been wiped out?), knowing the origin of the new landmass has cleared up so much of my haze about the setting. I'm very curious about how all the different world building elements play out in the future.

5) What about the romance? Several people have asked me about romance in this book. There really isn't any, although Kelsey has definitely expressed interest in a specific character, and he seems to be gravitating towards her as well. Though it's hard to tell if his feelings are romantic, or if anything will develop at all between them. I find this person intriguing, and I cannot wait to find out more about him. However, I'm not sure what I think about him as a love interest for Kelsey in light of some revelations about him later in the book. (It has nothing at all to do with love triangles - I'm not seeing any competing parties if you're worried about that.) There's one other character I think could be a match for Kelsey, but I truly have no idea where this is going on that front. Kelsey has a lot more going on than her love life, and based on this book, I don't see that being the driving force of the narrative in the future.

Love Triangle Factor: None
Cliffhanger Scale: Low - Medium, This doesn't end on a stressful moment. But Kelsey clearly has a long road ahead of her, and many people who don't want her to succeed.