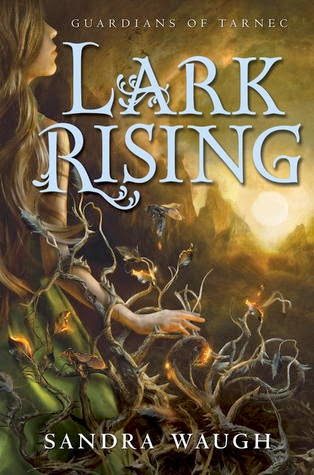 Book description: Full of romance and nature magic, this debut fantasy is perfect for fans of Shannon Hale, Juliet Marillier, and Kristin Cashore. Lark has foreseen two things—she will fall for a young man with sage green eyes,and he will kill her. Sixteen-year-old Lark Carew is happiest close to home, tending her garden and gathering herbs for medicines. But when her Sight warns her that monsters called Troths will soon invade her village, Lark is summoned on a journey to seek help from the legendary Riders of Tarnec. Little does she suspect that one of the Riders, Gharain, is the very man who has haunted her visions. Or that the people of Tarnec have called her there for another reason: Lark is the Guardian of Life, the first of four Guardians who must awaken their powers to recover four stolen amulets. Together, the amulets—Life, Death, Dark, and Light—keep the world in Balance. To take back the Life amulet, Lark will have to discover her true inner strength and give in to a love that she swears will be her downfall.
__________________________________________________________________________

Reviewing this book is a very sad experience for me. You see, I was so excited for Lark Rising when I first heard about it, and I really wanted to like it. I tried hard to make that happen, but this heroine kept getting in my way.

My biggest struggle in this book was the narrator Lark herself. I had trouble understanding her character and just liking her in general. I felt like we would make some progress, and then she'd do something new that irritated me. It's hard to even describe why that was, because in many ways she acted like the typical heroine. But Lark had this underlying sense of self-doubt and feelings of unworthiness that permeated her character in a very negative way. Plus on top of that she was stubborn. It was a bad combination and just didn't connect well for me at all.

The romance in this book started off a little rocky, but I don't mind the antagonistic beginnings, and I sympathized with Gharain's enormous guilt over his past decisions. I was hopeful that the love story would be a strong aspect of this story, until Lark's immaturity and stupidity got involved and it became one of the more frustrating and unbelievable elements. Mostly in terms of Lark's misguided beliefs. The romance has an air of inevitability about it, and I didn't mind the instant attraction elements here, but some of the obstacles didn't work for me.

I've put more information about my difficulty with the romance under the show/hide spoiler tag.

The story itself started off pretty slowly, but overall the plot was fine. Though, honestly, I was so distracted by Lark that I don't feel like I can analyze it properly. The fantasy world was interesting and I liked the idea of Balance as a major theme. I also liked Twig's role; he was a character that stood out to me. However, because of the way Lark acted, I didn't like this book more and I couldn't believe the ending she's given in the story. It just didn't ring true to me, or feel well deserved at all. I was so excited about this new series before I read Lark Rising: I love fantasy, it was blurbed by Juliet Marillier, and the series is supposed to be four books with four heroines and no love triangles. But now I'm super bummed. I'm not completely ruling out reading the next installment, especially if the heroine reads differently, but my expectations have dropped tremendously.
Love Triangle Factor: None Cliffhanger Scale: Low. This story is wrapped, but some indication of where the next is headed, especially the main heroine and hero.