Dual Review: The Eighth Guardian and Blackout by Meredith McCardle 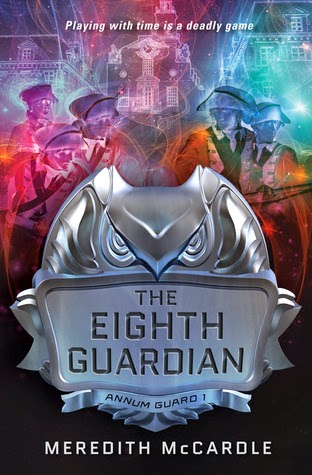 It’s Testing Day. The day that comes without warning, the day when all juniors and seniors at The Peel Academy undergo a series of intense physical and psychological tests to see if they’re ready to graduate and become government operatives. Amanda and her boyfriend Abe are top students, and they’ve just endured thirty-six hours of testing. But they’re juniors and don’t expect to graduate. That’ll happen next year, when they plan to join the CIA—together.

But when the graduates are announced, the results are shocking. Amanda has been chosen—the first junior in decades. And she receives the opportunity of a lifetime: to join a secret government organization called the Annum Guard and travel through time to change the course of history. But in order to become the Eighth Guardian in this exclusive group, Amanda must say good-bye to everything—her name, her family, and even Abe—forever.

Who is really behind the Annum Guard? And can she trust them with her life?

Amanda is a junior at a private high school that trains students to enter the CIA and other specialized government offices. Each year the juniors and seniors compete in intense physical and psychological tests on an unannounced Testing Day, after which the seniors graduate. Although juniors never leave early, Amanda has a strange feeling that the man with a green tie who's been watching her all day, may have different plans for her. She's right, when unexpectedly, her name is called to graduate. All of a sudden Amanda - now code named Iris - is part of the Annum Guard, a secret government organization that time travels to "enhance" history. Leaving her boyfriend and family behind were hard enough, but Iris is treated like an outsider in the organization, and she quickly learns that she can't trust everyone - maybe not anyone.

What I love -
The Eighth Guardian was so much fun - this book kept me on the edge of my seat. I loved the time travel and intrigue and all the different time periods and historical events. I was excited that so much of this book takes place in Boston, including a fantastic section that involves the Isabella Stewart Gardener Museum Heist. The time travel set-up with wormholes, time losses and physical dangers of moving though time was also complex, though not too confusing to understand. This book makes much of the difference between altering the past and enhancing it - aka, making minor changes. And it's interesting to see how that plays out in the story, though I'd like to see even more dramatic consequences of changing even minor details.

For the most part, I enjoyed Iris's narrative. I cannot imagine facing the huge upheavals that she does, or entering an organization filled with people who seem more suspicious and secretive than they are welcoming of her. While I think she could be impulsive and judgmental at times, I liked her determination to find answers and keep going even when situations got dire. She also does (eventually) build relationships with people in this book, and I enjoyed seeing her find friendship and support. I'm looking forward to even more of that in the future.

What I wish - There was some mean girl jealousy and drama that I think was somewhat overdone. I also feel sort of indifferent about the romance. Amanda and Abe are already dating when the book begins, which is a unique approach. Though it actually didn't bother me at first, and I was able to connect into their relationship pretty well. However Abe is gone for a large part of the story, and we're mostly told about their relationship by Amanda. Without him on screen, I began to lose touch with them as a couple. Then I was disappointed in some of his actions near the end. Still, the author seems to make a point to say that this series won't have a love triangle, and I hope that I'll get more into their relationship in the next book when (hopefully) we get a chance to actually see them together.

As the story progresses, Iris/Amanda uncovers several unsettling secrets about the Annum Guard, and the tension in the story shifts to the mystery surrounding those. I'm already eager to dive into book two and find out more pieces of the puzzle!
Love Triangle Factor: NoneCliffhanger Scale: Low/Medium - this storyline wraps but there are still a lot of loose ends and clearly at least one more book to go.

**Read on for my review of book 2**
I attempted to make my thoughts spoiler free for the series, and safe for even new readers. I do not give away any specific plot elements in the following review, though I do go into more details on the romance. 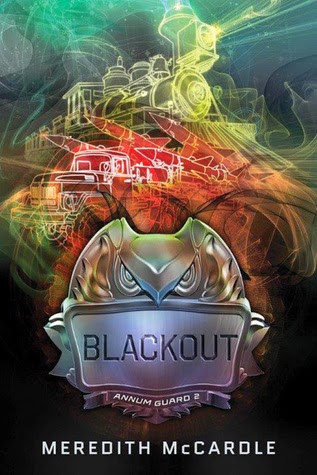 Seventeen-year-old Amanda Obermann (code name: Iris) has more on her mind than usual. As a member of a covert government organization called the Annum Guard, which travels through time to keep history on track, Iris has been getting some particularly stressful assignments. Plus, Jane Bonner, the Guard’s iron-fisted new leader, seems determined to make life as hard as possible. Thankfully, Iris has Abe (code name: Blue), her boyfriend and fellow Guardian, who listens to her vent—and helps her cope with her mentally ill mother’s increasingly erratic behavior.When Guardians start to disappear on their assignments, Iris makes a terrifying discovery: a “blackout” squad is targeting anyone who gets in the way of a corrupt force that’s selling out both the Annum Guard’s missions and Guardian lives. Together, Iris and Blue must go undercover to untangle the Guard’s elaborate web of secrets and lies. But when Iris discovers that the terrible truth may involve her own father, a former Guardian undone by his own greed, she must decide how much she’s willing to risk to rescue her friends…and how dangerous the consequences will be for all of humanity.A thrilling time-traveling adventure that spans from Abraham Lincoln’s assassination to the Cuban Missile Crisis and back to the present day, this pulse-pounding sequel to The Eighth Guardian reveals that playing with time can turn into a deadly game.
____________________________________________________________________________

Time Travel
The sequel to The Eighth Guardian is fast paced and kept me quickly turning pages from start to finish. I wanted to figure out what was going on with the government and the Annum Guard, and find out the identity of XP as much as Iris did. While the first book focused more on real historical events, adding in the internal Guard intrigue as the book progressed, this book was mostly focused on the latter with historical events as backdrops. It was still fun to travel to different places and times, though. I loved seeing how social customs, women's roles and security has changed so much.

Amanda/Iris
Iris continues to be stubborn and not good at listening to others, or following orders. A few times I disagreed (strongly) with her choices. I'm glad there are people who call her out on that, even if she rarely listens. This series isn't as focused on character growth as it is action and deception, though I hope Iris will find more growth by the conclusion of the series, and I think she's forced to confront her choices by the end of this installment. Despite that, Iris and I mostly got along throughout this book. I would never do as well in the high pressure situations she encounters, and she barely has time to think about her personal life before she's rushing off into another high stress situation.
RomanceMy biggest issue with this story was the romance, which I'm going to talk about at more length, because it's always an important part of a book for me. If romance doesn't skew as highly for you, then this might not weight as much as it did for me. Especially, if you are invested in the other aspects of this story. Iris and Abe were dating when the first book began, which made sense for the way the story was set up. However, for most of both books, she and Abe have either been separated or not communicating well. That coupled with never seeing their initial connection when their relationship began, has eroded my enjoyment or understanding of their relationship.

In this book, Iris and Abe are at least together more. But despite that, their relationship stalls into an awkward holding patter where they keep coming to conflict then backing up and glossing over issues between them. I would think they were headed towards a breakup, but then in the next chapter Iris would strengthen her resolve to be with Abe and declare everything was okay. But I needed to see them working together and talking about their issues to believe in their relationship. Thankfully, it is not central to the plot, but Iris is thinking about it frequently. Honestly, they just didn't seem to be a healthy couple anymore. I'd almost like to see them back up and rebuild if they are going to stay together. I admire their loyalty to each other and for their sakes (and for the sake of the readers who have also invested in them), I want them to figure it out, but they have work and communicating to do!
EndingThis book ends on a cliffhanger and I liked the direction it story takes a lot. It definitely has me excited to read the third book. At the end, we finally see consequences for different people's actions and the way they've been playing with time. I enjoyed seeing the outcome of some of the questions I've had since the beginning. Especially the idea that any past change can have future consequences. I think the third book will be particularly interesting to explore this.

Current EventsAlthough this series highlights some big events in past US history, there has been no mention of recent ones, such as 9/11. I'm surprised no one has mentioned what would happen if something like that was altered, or even if the Guard had considered that possibility in the past. I mean, at least one of those flights actually left from Boston! Even if it was just a conversation, I think more complexity and relevance could be added to this story by asking some questions about more current events. Still, I like that Iris has begun to think through whether time travel and altering history are too dangerous as a whole to even mess with.

Final Thoughts
Despite my mixed feelings about the romance, I've still enjoyed this series and I'm very much looking forward to the final installment after what happens at the end of book two.
Love Triangle Factor: None-ish - If you are highly allergic to any hints of relationship conflicts, ask me for more details on this. But all the way through it's really only been Amanda and Abe, and I foresee the same for the finale. Cliffhanger Scale: Medium/High - no immediate danger, but some huge things to come!