The Winner's Kiss by Marie Rutkoski 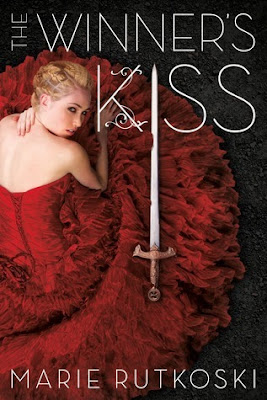 War has begun. Arin is in the thick of it with untrustworthy new allies and the empire as his enemy. Though he has convinced himself that he no longer loves Kestrel, Arin hasn’t forgotten her, or how she became exactly the kind of person he has always despised. She cared more for the empire than she did for the lives of innocent people—and certainly more than she did for him.At least, that’s what he thinks.In the frozen north, Kestrel is a prisoner in a brutal work camp. As she searches desperately for a way to escape, she wishes Arin could know what she sacrificed for him. She wishes she could make the empire pay for what they’ve done to her.But no one gets what they want just by wishing.As the war intensifies, both Kestrel and Arin discover that the world is changing. The East is pitted against the West, and they are caught in between. With so much to lose, can anybody really win?

This book, this series, are going on my all time favorites shelf. What an incredible ending to a story that began when a girl purchased a boy in a slave market. I - and they - had no idea what we were getting ourselves into. But from the first page, I was hooked, and I knew it would be something special. Oh how this journey has hurt at times. The whole middle book smashed me into tiny pieces. But this series is also filled with an enormous amount of beauty, and this final installment healed my soul. The language alone is so incredible it makes me ache. And the story of Kestrel and Arin - one of tenuous hope, intense heartbreak, and a love that heals the most broken places - has stolen my heart once and for all. Highly, highly recommended.

I have learned to fear finales. After facing some huge disappointments, I always go into series ends with a fair bit of trepidation. Hoping to be blown away, but nervous, because a bad ending will cloud my view of the entire series. Thankfully, I had nothing to fear with this conclusion. From the first sentence of The Winner's Kiss, the language utterly slayed me. I probably highlighted half the book the first time I read it, and then I read it again and highlighted even more. But language alone can't save a story, and this finale also brought me everything I wanted and needed for Kestrel and Arin's last book.

Let's face it, Kestrel and Arin are the reason I've fallen so hard for this series. I love them fiercely as individuals, but together, they are an unstoppable force. And I am utterly hopeless at seeing the ways in which they've changed and grown since the beginning.

Even though they grew up on the same peninsula, Kestrel and Arin are from two vastly different nations. When they were both children, Kestrel's people overthrew Arin's. Kestrel purchased Arin as a slave. Arin led a secret revolt to overthrow her country's rule. Then Kestrel brokered a deal to save Arin's people by agreeing to marry the prince. And on and on it went. In the first two books, I felt these power imbalances between them in a visceral way, and I had no idea how they could stand as equals in the same place, going in the same direction.  In The Winner's Kiss, everything has changed for them again, and that equal footing still feels far away at times. But I love that Arin and Kestrel are in the same place, working together for much of this installment. I can't tell you how much I crave that in finales, but especially after everything that transpired in the last two books.

Though they are together in physical space for much of this book, neither Arin nor Kestrel are who they once were. In The Winner's Curse, Arin was very closed off and hard. But in this book his emotions are so much more on the surface and he is not afraid to express them. I fell so much more love with Arin (as if I wasn't already) in this installment, because we get to see further into his mind and heart. But I think I was most surprised by Kestrel's journey. Kestrel comes to a place in this book where she is completely broken and vulnerable, and that was hard to watch happen. But through it all, I love that we never lose sight of the strength within her. This girl is like a phoenix and my love for her is immense.

Kestrel is a brilliant strategist, but she has never been the strongest physical fighter. Arin has an uncanny aptitude for war, which serves him well in this installment, as he is at war with the Valorians. I love the way this book and the climax, plays to both of their abilities. But even more, I love the way these two see and understand each other better than anyone else. All through this series they push and pull against each other because of that. They do it even unconsciously, but that speaks for how well they know each other. And it's one of the reasons I have read this entire series, desperate for them to fit together, despite the opposing sides on which they were raised.

Throughout this series, Kestrel and Arin have both faced moments of profound isolation and loss - of friends, of family, of circumstance. Because of that, I love that relationships are such a part of this book for both of them. Of course with each other, but also with others. Some of the relationships that stood out to me in this installment were between Arin and his god, Arin and Roshar, and Sarsine and Kestrel. But this book also features painful relationships, one of the hardest being between Kestrel and her father. All of these different bonds speak so much to these characters, and they especially stood out to me the second time I read this book.

I'll admit that I went into The Winner's Kiss with a lot of fear, but author Marie Rutkoski was right when she asked whether we trusted her. She truly delivered in this final installment. I'm even reading this book for the third time - this time on audio - because I adore it so much. The more I read, the greater my appreciation for how Rutkoski has crafted her words, her characters, and their story. My love for Arin and Kestrel also has magnified, if that were even possible. Basically, I am even more in awe of this series and fully in love with this finale.

Finally, I want to say thank you:

I feel extremely grateful to have been able to watch this series and these characters come to life from The Winner's Curse onward. Thank you Macmillan and Fierce Reads for allowing me to read each of the books pre-release, and for including me in the blog tours and for giving me the opportunity to interview the author on various occasions. Thank you Marie, for writing this story for us to enjoy and cry and swoon over, for answering my questions, (for no love triangles), and for being all around gracious and amazing. I know this post is overlong, and possibly overwrought. But even with all these words, I still feel as if I've fallen short of describing how much I love it. I guess, all I can say is, READ THIS SERIES.

Other posts on this series: