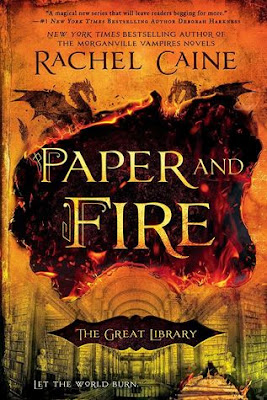 Paper and Fire
by Rachel Caine

In Ink and Bone, New York Times bestselling author Rachel Caine introduced a world where knowledge is power, and power corrupts absolutely. Now, she continues the story of those who dare to defy the Great Library—and rewrite history…

With an iron fist, The Great Library controls the knowledge of the world, ruthlessly stamping out all rebellion, forbidding the personal ownership of books in the name of the greater good.

Jess Brightwell has survived his introduction to the sinister, seductive world of the Library, but serving in its army is nothing like he envisioned. His life and the lives of those he cares for have been altered forever. His best friend is lost, and Morgan, the girl he loves, is locked away in the Iron Tower and doomed to a life apart.

Embarking on a mission to save one of their own, Jess and his band of allies make one wrong move and suddenly find themselves hunted by the Library’s deadly automata and forced to flee Alexandria, all the way to London.

Paper and Fire is book two in the Great Library series, and it was excellent. In fact, I would go so far as to say this book is going to be one of my favorites of the year, which is hard feat to accomplish with a middle-of-the-series release. While I enjoyed Ink and Bone last year, I was completely glued to its follow up. Thrilling from beginning to end, the pace is much faster, the twists sharper, and the stakes even higher than the first installment. The the alt-history with some magic (aka alchemy in this book) setting also continues to fascinate and frighten me with its richness and complexities. But it is the relationships between the characters that stood out to me the most.

Jess Brightwell has not had an easy time of it, and he's currently trying to survive his first year in the Library's army, a posting he's lucky to have, although it's not exactly what he wants to be doing. Jess has faired a lot better than some of his friends, and worse than others, but I love how clear it is from the start how close they all still are. One of my favorite aspects of this series is the 'family' Jess has formed with his fellow students from last year, including Wolf and Santi, whom are another favorite part of this series and not to be missed. (Go HERE to read a short prequel story about their meeting)

Safety in this world is a fragile thing, and any missteps can spell disaster. Jess's facade of peace deteriorates very quickly, and all of a sudden he and his friends are on the run together. As they travel to new locations and face increasingly dangerous situations, they learn even more about the Library that rules their world, and its power hungry Archivist. All while fighting to rescue and keep each other alive. My heart broke for each of them at different times, but I love, love the fierce bonds between these characters, as well as the ways they support each other, and each use their various talents throughout the book.

This book features several couples and no love triangles. Jess and Morgan's relationship continues to be fraught (as she's trapped in the Iron Tower) even as it slowly deepens, and I loved seeing them face challenges together. Wolf and Santi are my absolute favorite couple in this series. But friendships between the characters are equally - if not more - important. I appreciated, so much, seeing how Jess's relationship is a little bit different with each of his friends. Though less reliable, I'm always fascinated by Jess's interactions with his family, especially his twin brother Brendan.

The story ends with a bit of a cliffhanger/hook (leading the characters in a new direction), and of course I'm desperate to find out more about where they go next! If you have not started this series yet, it's time to do that now.

Love Triangle Factor: None (several couples, no triangles)
Cliffhanger Scale: Medium - more of a hook/anticipation for the next book.