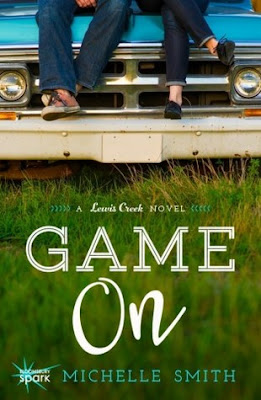 Game On
by Michelle Smith
Published: August 16th 2016 by Bloomsbury Spark (Out Now!)

Book Description: As king of baseball in the small town of Lewis Creek, Eric Perry can have any girl he wants and win every game he plays. But when a fight lands him in jail, he’s only got one more strike before his baseball career is over for good. His only chance for redemption? The girl next door, Bri Johnson.

Bri hasn’t talked to Eric in months—for starters, she’s been too busy dealing with her jerk of an ex-boyfriend, not to mention the fact that Eric’s been preoccupied trying to drink every keg in the country dry. But when he needs a way to stay on the team, she proposes a plan: if he helps her out with community service, he can stay on the team. At first it’s a nightmare—Eric and Bri stopped being friends years ago, surely that was for a good reason, right? But as volunteering turns to bonding over old memories of first kisses under the stars, they start to have trouble remembering what pushed them apart.

In a town as small as Lewis Creek, nothing stays secret for long and their friendship and romance might mean bad news. But in this final, tumultuous spring before graduation, Eric and Bri are about to realize that nobody’s perfect alone, but they might just be perfect together. 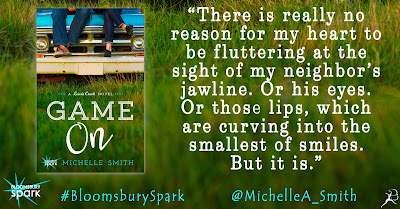 My dad would have a stroke if he caught Eric Perry on our porch. It’s not that Eric’s a bad guy, but he’s, well, not exactly Dad-approved, either. But it’s kind of hard for him to call those shots when he’s either on the road or sleeping for ninety-five percent of my life.

I scoot over, allowing Eric room to sit, which he does. He relaxes, sprawling his legs in front of him as he stuffs his hands into the pocket of his hoodie. Heat pours off of him, and as much as I hate the idea of love and everything about it right now, all I want is to curl up beside him. And that urge scares the living crap out of me. Eric is my neighbor. He’s Matt’s teammate. Being with him would come with a healthy dose of small town gossip for months to come.

And he’s a charmer, and there’s no telling what he could possibly do with a heart if it was in his hands.

My heart doesn’t want to be held. My heart wants to learn to beat on its own for a while.
So we swing in silence as time passes. But now, it doesn’t feel like pieces of me are drifting away—it feels like they’re slowly find their way back home.

“Laura ended up going to the dance with Randy tonight,” he says after a while. I glance over, finding him smirking. “Randy has more boyfriend potential than I do. That’s one hell of a shot to the ego. He’s probably chomping on dip while grinding all up on her.”

My stomach sinks. When he told me that on Monday night, about the conversation he had with Laura, I was kind of rude. But in my somewhat-defense, I was madder than a hornet.

“For what it’s worth,” I tell him, “what she said was dumb. I’ve seen you with other girls. You’re a good boyfriend.”

He lets out a light laugh. “Yeah? And what makes me a good boyfriend?”

Crap. I walked right into that one. A smile tugs at my lips. “Eric—”

“No, you’ve gotta tell me.” The smile in his voice is contagious; now there’s no fighting my own. “I’ve been wounded this week. I need to hear these things. Build me back up.”

I roll my eyes, but my grin widens. “Fine. You’re into the whole hand-holding, kissy thing. That’s good. Take my word for it; I’m a science girl. An observer. I notice these things.” What I don’t tell him is that I started noticing those things a couple years ago, when the tiniest part of me wished it was me holding his hand instead of his other girlfriends. I wished it was me hugging him. Kissing him. Because when you’re sixteen and the guy next door shoots up to over 6’ and all those years of baseball start doing mind-blowing things to his body, a girl’s gonna look once or twice.
Moments like these, when he listens and laughs and grins at me like no one else exists, have an awful lot to do with it, too.

But I pushed those feelings away real quick. He’s not into me like that—he wasn’t then, and I doubt he ever would be. I’m the one who used to climb trees with him. Soared through muddy fields on the back of his four-wheeler. Saw his first zit. Laughed when he nearly fell out of his dad’s deer stand the night we snuck up there to see how many constellations we could find.

Which was the night he gave me my first kiss.

And it hits me that I wish we could go back to that. To the simplicity of trees and constellations and first kisses that mean more than all the stars in the sky. But we’re not kids anymore. Life isn’t that simple. But I’m more than okay with this new whatever-it-is we have going.

He’s quiet for a while. I chance a glance over, only to find him staring ahead, seeming to be in thought. Finally, after what feels like forever, he turns to me. Grins. And that grin turns my heart inside out. “I do like the whole hand-holding, kissy thing,” he says.

He sets the swing in motion. The porch light at his house flips on, while the kitchen window goes dark. I’m pretty sure he’s supposed to go straight home when he’s done at the church, but for whatever reason, his parents aren’t freaking out about him being over here. Which is good. Because I’d be more than happy to sit on this swing with him all night. And that realization is slightly terrifying.

But maybe a little terror can be good for us. 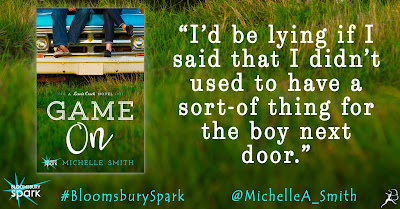 Blog Tour Giveaway: Win one of 3 e-copies of Game On