Vassa In the Night by Sarah Porter 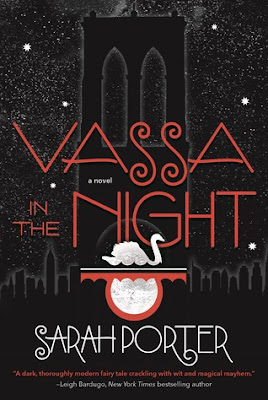 Vassa in the Night
by Sarah Porter

Book Description: In the enchanted kingdom of Brooklyn, the fashionable people put on cute shoes, go to parties in warehouses, drink on rooftops at sunset, and tell themselves they’ve arrived. A whole lot of Brooklyn is like that now—but not Vassa’s working-class neighborhood.In Vassa’s neighborhood, where she lives with her stepmother and bickering stepsisters, one might stumble onto magic, but stumbling out again could become an issue. Babs Yagg, the owner of the local convenience store, has a policy of beheading shoplifters—and sometimes innocent shoppers as well. So when Vassa’s stepsister sends her out for light bulbs in the middle of night, she knows it could easily become a suicide mission.But Vassa has a bit of luck hidden in her pocket, a gift from her dead mother. Erg is a tough-talking wooden doll with sticky fingers, a bottomless stomach, and a ferocious cunning. With Erg’s help, Vassa just might be able to break the witch’s curse and free her Brooklyn neighborhood. But Babs won’t be playing fair. . . .Inspired by the Russian folktale Vassilissa the Beautiful and Sarah Porter’s years of experience teaching creative writing to New York City students.
_________________________________________________________________________

I had no idea what to expect when I started Vassa in the Night. But very quickly, I was caught in this vivid, modern fairytale of a neighborhood that is being swallowed by the night, and a girl who goes out to buy lightbulbs at a convenience store and winds up caught in the center of a witch's curse.

I always like knowing the origins of a retelling, though I know very little about Russian folklore, and I went into this tale pretty much blind to its origins. But once I got to the dancing store on chicken legs, I knew I was missing something important, and spent some time looking up its background (apparently that's a standard part of the story). I enjoyed finding out where this modern tale intersects with tradition, but even standing on it's own, I was glued to Vassa's story and her plight against the BY and it's mysterious owner Babs Yagg.
One of my favorite aspects of this book was Vassa's voice. I found it easy to sympathize with her, partly because I was as confused as she was about what was going on in this story. But she is also engaging and likable, and has that determination-against-all-odds kind of character that you want to root for. And even when she wanted to give up, she had her tiny wooden doll Erg to help her along the way. I loved Vassa and Erg's friendship, and most especially there banter. I just wanted Vassa to succeed and find her place in her world. But her trek through this book isn't easy at all.

Despite all the impossible things that Babs puts Vassa through, this is a beautifully written story with gorgeous imagery. I wish I could see the dancing BY for myself, or the motorcycle coming around the parking lot and the flock of snowy swans in the sky. However, being the visual reader that I am, Vassa does not shower or change her clothes for the duration of this book and by the end she is literally covered in dried blood, and I almost couldn't handle it. Clearly that was way least of her concerns with all she was facing in this book, but I hope a shower is very near in her future. Vassa in the Night doesn't have much of a romance. It has some small inklings of the possibility. But I wouldn't pick this up looking for that element. I'm a romance girl and always look forward to its addition. I hoped for a little bit more here, but still found the story enjoyable without that. Vassa is not completely alone in her journey, and she has help along the way from some unlikely friends. Although Vassa ultimately has to decide to pick herself up and keep going, it was rewarding to see her realize how much she is valued by others.

In sum: As a modern fairytale steeped in Slavic Folklore, Vassa in the Night is a gorgeous book with vivid imagery, quirky characters and a heroine you'll want to succeed. However, romance is not at all the focus, if that is something you look for in a story.