The Problem with Forever by Jennifer L. Armentrout 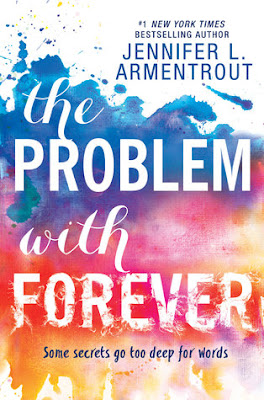 The Problem with Forever
by Jennifer L. Armentrout

Book Description: For some people, silence is a weapon. For Mallory “Mouse” Dodge, it’s a shield. Growing up, she learned that the best way to survive was to say nothing. And even though it’s been four years since her nightmare ended, she’s beginning to worry that the fear that holds her back will last a lifetime.Now, after years of homeschooling with loving adoptive parents, Mallory must face a new milestone—spending her senior year at public high school. But of all the terrifying and exhilarating scenarios she’s imagined, there’s one she never dreamed of—that she’d run into Rider Stark, the friend and protector she hasn’t seen since childhood, on her very first day.It doesn’t take long for Mallory to realize that the connection she shared with Rider never really faded. Yet the deeper their bond grows, the more it becomes apparent that she’s not the only one grappling with the lingering scars from the past. And as she watches Rider’s life spiral out of control, Mallory faces a choice between staying silent and speaking out—for the people she loves, the life she wants, and the truths that need to be heard.
_______________________________________________________________________

The more I think about this book, the more it makes me angry. I think maybe it's because I really wanted to love it a lot. And I didn't. It also bothers me so much when I seem to be the only person to have a specific issue with a story. I just need to move on now.The Good: I really liked Mallory. I especially loved her journey from crippling social anxiety and not liking herself to confidence and taking action in her life. And I enjoyed seeing JLA write a YA heroine who is not snarky or 'badass' in the traditional sense. I loved the connection to The Velveteen Rabbit. I also appreciated the way this book shows the value of therapy and support from others, but ultimately each person has to make their own choices and do their own work to change.The Bad: I STRUGGLED with the romance. Rider has a girlfriend through the first half of the book (we don't find out they broke up until after 50%), and I did not like anything about how that situation was handled. That's usually dealbreaker for me anyway, but I pushed through. Sadly, it was not a good choice for me. I thought the story was getting better in the second half. But nope. While I liked Mallory a lot - minus her romantic choices - I ended up mostly disliking Rider. I have a LOT more thoughts on this, which you can read on my Goodreads review.Love Triangle Factor: (Possible Spoilers) I don't know what to say here. Most people would just say none, and from Mallory's POV there isn't. Though honestly, I wish she'd gone out with someone to wake up Rider a bit out of his idiocy. But Rider has a girlfriend for half the book, and to me that becomes a triangle, I'd also say his behavior towards Mallory skated over the line of cheating. So I'd say medium for the first half. But again, for most people, this will not be an issue at all. Look at other reviews as an example. Cliffhanger Scale: standalone/companion series (I think). This book seems to be setting up a future couple. I liked both of them, but not sure I could invest in more if this were a series.