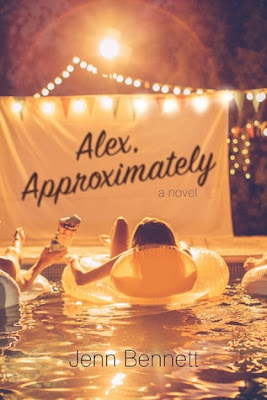 Book Depository: In this delightfully charming teen spin on You’ve Got Mail, the one guy Bailey Rydell can’t stand is actually the boy of her dreams—she just doesn’t know it yet.
Classic movie buff Bailey “Mink” Rydell has spent months crushing on a witty film geek she only knows online by “Alex.” Two coasts separate the teens until Bailey moves in with her dad, who lives in the same California surfing town as her online crush.
Faced with doubts (what if he’s a creep in real life—or worse?), Bailey doesn’t tell Alex she’s moved to his hometown. Or that she’s landed a job at the local tourist-trap museum. Or that she’s being heckled daily by the irritatingly hot museum security guard, Porter Roth—a.k.a. her new arch-nemesis. But life is whole lot messier than the movies, especially when Bailey discovers that tricky fine line between hate, love, and whatever-it-is she’s starting to feel for Porter.
And as the summer months go by, Bailey must choose whether to cling to a dreamy online fantasy in Alex or take a risk on an imperfect reality with Porter. The choice is both simpler and more complicated than she realizes, because Porter Roth is hiding a secret of his own: Porter is Alex…Approximately.
_________________________________________________________________________

This was so so good. In all genres Jenn Bennett is a favorite author of mine! Here are some reasons I loved Alex, Approximately:1) The setting is so vivid it's tangible. This town came alive with colors, sights, sounds, smells and tastes. Cornado Cove is a Californian mid-coastal tourist town with lots of surfing, a boardwalk, delicious food (I was hungry every minute of reading this book), and a weird and wacky museum called the Cavern Palace. I'm desperate to book a trip to visit. I nearly cried when I looked it up and found out it isn't a real place (is it based on one?).
2) I liked Bailey right away. She's got some things she's fighting from her past and she's a little bit of the broken girl, but her tone was still upbeat and hopeful. I didn't get the heavy 'here we go...' feel with her at all. Not that that isn't an honest portrayal within this trope, but I get exhausted following a character who's fighting against everything. I enjoyed watching Bailey learn to open up and get closer to her father and make friends with Grace and of course get to know Porter better. She makes mistakes (who doesn't?!), but she learns from them and doesn't create unnecessary angst for herself. I do wish we'd been able to explore her relationship with her mom more, though. It felt a little tacked on to the end. 3) I love the banter between Bailey and Porter and everything about watching their relationship develop. I like that they don't seem to have anything in common at first but the more they got to know each other, the more they realized that wasn't the case at all. Even when their direct interests didn't align, they were constantly fascinated by and being challenged by each other. Jenn Bennett is so good at showing a relationship develop from awkward meetings and misconceptions to fluttery feelings, changing perceptions and more more more. It was gooood. 4) This story is a little bit hate to love and a little bit You've Got Mail and all adorable summer read. Also I totally thought about the song they reference at the end while reading this book! I can't wait until this comes out for real. Recommended for sure! Love Triangle Factor: NoneCliffhanger Scale: Standalone
Posted by Lauren @ Love is not a triangle at 12:00 AM