The Undercurrent by Paula Weston 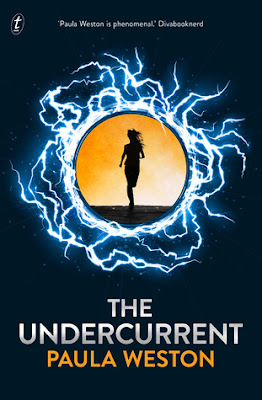 The Undercurrent
by Paula Weston

Book Description: Eighteen-year-old Julianne De Marchi is different. As in: she has an electrical undercurrent beneath her skin that stings and surges like a live wire. She can use it—to spark a fire, maybe even end a life—but she doesn’t understand what it is. And she can barely control it, especially when she’s anxious.
Ryan Walsh was on track for a stellar football career when his knee blew out. Now he’s a soldier—part of an experimental privatised military unit that has identified Jules De Marchi as a threat. Is it because of the weird undercurrent she’s tried so hard to hide? Or because of her mother Angie’s history as an activist against bio-engineering and big business?
It’s no coincidence that Ryan and Jules are in the same place at the same time—he’s under orders to follow her, after all. But then an explosive attack on a city building by an unknown enemy throws them together in the most violent and unexpected way.
Paula Weston, author of the much-admired Rephaim series, returns with a standalone work: a futuristic thriller that is only slightly futuristic—but utterly and undeniably thrilling. Great writing, heart-burning characters, probing questions about where technology is taking us—and a plot that zips and zings like an electrical current itself. This is a great young-adult writerat the peak of her powers.
__________________________________________________________________

I have been a fan of Paula Weston's books since I discovered her Rephaim series. As an Aussie author, her books take longer to reach the US, and I typically order them from overseas before they are published here a year or two later. That's exactly what I did as soon as I heard she was releasing a new title. While the Rephaim series remains my favorite, I had so much reading this book and meeting Weston's new characters.

Set in Australia several years in a future, The Undercurrent starts almost right away with action and has a lot going on all the way through. Jules has an electrical current running beneath her skin, although she doesn't understand how or why it works. Ryan is part of an experimental military group. They meet seemingly by coincidence (it's not) when Jules goes to an interview and get caught up in a building explosion.

Big corporations with greedy agendas, government secrets, fed up protesters, and the electricity surging under Jules' skin all combine for an explosive story. This book is mostly told through Jules and Ryan's perspectives, although we get other POVs as well. Although I looked forward to Jules and Ryan's narrative the most, I like the realism in the story in Jules and her mom Angie's close relationship and the role Angie plays in the book. As I've come to expect in Weston's stories, this one features great chemistry between Jules and Ryan, and a sizzling romance. Unlike this author's previous multi-book interlocking series, this one appears to be a standalone with a solid ending.

I definitely recommend this book. It's available from Australia now, or for preorder from Amazon for next year. In the mean time, if you haven' read Paula Weston's Rephaim series, go do that now.

Love triangle Factor: None
Cliffhanger Scale: Standalone - as far as I know.