Dark of the West by Joanna Hathaway 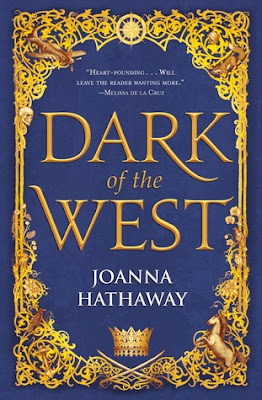 Book Description: He was raised in revolution. She was raised in a palace. Can their love stop a war? Code Name Verity meets The Winner's Curse in Joanna Hathaway's Dark of the West, a breathtaking YA fantasy debut.Aurelia Isendare is a princess of a small kingdom in the North, raised in privilege but shielded from politics as her brother prepares to step up to the throne. Halfway around the world, Athan Dakar, the youngest son of a ruthless general, is a fighter pilot longing for a life away from the front lines. When Athan’s mother is shot and killed, his father is convinced it’s the work of his old rival, the Queen of Etania—Aurelia’s mother. Determined to avenge his wife’s murder, he devises a plot to overthrow the Queen, a plot which sends Athan undercover to Etania to gain intel from her children.Athan’s mission becomes complicated when he finds himself falling for the girl he’s been tasked with spying upon. Aurelia feels the same attraction, all the while desperately seeking to stop the war threatening to break between the Southern territory and the old Northern kingdoms that control it—a war in which Athan’s father is determined to play a role. As diplomatic ties manage to just barely hold, the two teens struggle to remain loyal to their families and each other as they learn that war is not as black and white as they’ve been raised to believe.
_____________________________________________________________________

What I Love: Oh my goodness gracious, this series is going to murder me before it’s over. I don’t know how many books are planned, but I’m freaking out thinking of what is to come. I read this all the way through, then reread the prologue, and I’m even more of a mess now.

THE DARK OF THE WEST is filled with political maneuvering and the machinations of war. And you need to pay attention from the start. It is all told through the perspective of a young princess and a new pilot, who are slowly but desperately caught up in its web, even as they fall for each other. It is a masterful process in an incredibly detailed world - and sure to have brutal results. The story contains a trope I love - enemies to lovers. As well as one I don't love - characters keeping their true identities secret from each other - but I was completely invested in these characters' lives and choices through it all. All I can say is that there's going to be some consequences to come, and I may need to be hiding under a blanket when they happen. What I Wish: I wish this book had a cast list, and I wish I'd had the map when I read. Also this is a small picky thing, but this story had so many R names - a prince, a king and two different countries, which definitely confused me on who and what was what. The plotting and war making are pretty complicated in this story, and though I love a good political book, some things edged towards confusing for me. I am just hoping that the next installment has a good recap! Love Triangle Factor: NoneCliffhanger Scale: Medium - so much more to come!
Posted by Lauren @ Love is not a triangle at 12:00 AM