I'm excited to be part of the Hale Maree blog tour! Find the other tour stops HERE. 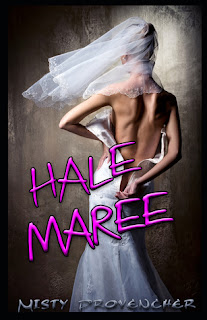 Hale Simmons dreams of climbing out of her impoverished life, going to college, and getting herself a titanium crash helmet, so she can eventually bust through the Plexiglas ceiling of her crappy life. But for now, she’s just a 18-year-old girl with a flimsy hope, barely getting by with her alcoholic father, Jerry.But for Hale, ‘crappy’ suddenly takes a nosedive, when Jerry becomes the sole witness to a horrible accident. It is an event which means to effect everyone, especially Hale, who wasn’t even involved.While the depth of the accident has just begun to unfold, Otto Maree, a prominent business man and old family friend, stands to lose everything because of it. Otto is desperate for Hale’s father to stay quiet about what occurred the night the two men met for a drink. Out of mutual moments of desperation, the two fathers forge a deal. Jerry is desperate to gain financial stability for both himself and Hale, and Otto Maree is more than willing to pay to keep his secret just that. But deals like this need to be made of the strongest vows and bound with the most faithful of loyalties. Otto proposes a marriage between Hale and his playboy-son, Oscar, in order to assure that the secret remains ‘in the family’. The mystery surrounding the accident continues to grow and Hale struggles against her own mysterious feelings that begin to develop for Oscar, who turns out to less of a playboy, but just as fiercely loyal and dedicated as his father. As the pressure around her continues to escalate, Hale realizes that she’s got to decide if this arranged marriage is really just a big mistake or an amazing twist of fate that has been waiting around for this particular accident to happen.

When I started Hale Maree, I thought no way would this concept work.

Hale Simmons is a recent high school graduate living with her drunkard father, because her mom has left town. She doesn't have much going for her, but she has the desire to make something of her life. Then her father comes home drunk one night - this isn't anything new - and he has a friend with him. Her dad and this guy (who she learns is an old friend named Otto Maree) start talking about a deal between their families, and she's pretty sure she hears 'marriage' and her name in the same sentence. It's all very mobster sounding to Hale, but she assumes (hopes) that it's just ravings of two guys who have had too much alcohol.

However, in the morning Hale learns that her father is very serious about the deal he made. You see, something happened at the bar the night before and Otto wants to make sure that Hale's father never tells anyone about it. For his silence Hale's father will get money he desperately needs to start a business. To seal the deal and make sure neither backs out, Hale will have to marry Otto's son Oscar. Does this sound crazy to anyone else? Don't worry Hale thought so too.

Hale does not know Oscar all. And she's supposed to marry him?? She is obviously not pleased by this news, and I was outraged right along with her. BUT as the story moved along and we got to know Oscar better, my defenses dropped little by little, and I started to think that maybe it wasn't such a bad idea after all.

Hale Maree slowly seduced me. I was horrified and turned off at first by the idea of Hale being forced to marry a guy she doesn't know. But then Oscar wore my defenses right down along with Hale's until I was flipping pages as quickly as I could, hoping that she would fall for him too. I applaud Misty Provencher's ability to choose a subject that is largely unheard today (in America at least) - an arranged marriage - and make me believe in it for this couple.

The entire story is told from Hale's perspective, and I enjoyed being in her head. She had me laughing from the first few pages of the book. I loved her observations about the world and her best friend Shar was hilarious. I especially enjoyed all of their conversations. Everyone needs an enthusiastic friend! But I do wish we'd been able to get to know Hale better. Besides her love of reading, we don't get a sense of any other passions, or what exactly her plans for the future were up to this point in the story. I would have liked to see her character fleshed out a bit more.

Oscar grew on me pretty quickly as well, and I could see how he was a great match for Hale. I loved how devoted he was to her, even though his feelings did develop a little quickly. Hale Maree focuses mostly on the development of Hale and Oscar's physical relationship. While that was certainly addicting, and I enjoyed watching Oscar slowly break down Hale's walls, I wish we'd gotten to know them both better as individuals first. I would have liked to have seen them get to know each other better, before any sort of physical relationship started. I think the tension between them could have been built well without it. However, I know some readers will disagree with me on that point!

I think the strength of Hale Maree is in how well Misty Provencher was able to make me care about Hale and Oscar as a couple, and root for them despite the unusual circumstances. In the end, I wanted them to be together, because I thought they were great together, even though I didn't fully believe the why of the arranged marriage.

By the end of the book, I was completely sold on Hale Simmons becoming Hale Maree.

NOTE: I wasn't expecting this book to be quite so steamy. It was fun, but definitely NOT a YA book. Please be warned of adult content.


Read on for a look at Misty Provencher's most recent New Adult release called Mercy. 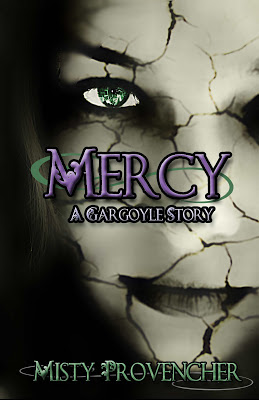 My will to survive is the first thing to drown.
I know, because I hold it under myself.

After facing severe tragedy in life, Madeline assumes her death will be easy.
But the angels do not come to take her to Heaven.
Instead, what retrieves her is something she never expected: a gargoyle.

Delivered to Truce, the King of the Gargoyles, Madeline now has choices she never wanted.  She has the ability to take over the entire Gargoyle Kingdom, if she is willing to kill the king.  However, looking to prevent takeover, Truce transforms Madeline, thereby granting her the ability to achieve the thing she wants most—death—if she can just find the human recipient for the Gargoyle Gift that she now has to give.  It should be easy.

But lives, whether they are lived or not, are seldom simple, and Madeline’s past still stands in her way. Now, only a voyeur in the life of The Boy with the Golden Rod Voice, Madeline’s must reconcile her own life and death, if she ever hopes to have free reign of her soul.


Now TWO giveaways!
(I don't know why these aren't working for me today. But if you click on the links it will take you to the giveaways.)

Best of the Best