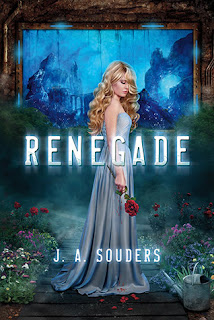 Since the age of three, sixteen-year-old Evelyn Winters has been trained to be Daughter of the People in the underwater utopia known as Elysium. Selected from hundreds of children for her ideal genes, all her life she’s thought that everything was perfect; her world. Her people. The Law.
But when Gavin Hunter, a Surface Dweller, accidentally stumbles into their secluded little world, she’s forced to come to a startling realization: everything she knows is a lie.
Her memories have been altered.
Her mind and body aren’t under her own control.
And the person she knows as Mother is a monster.
Together with Gavin she plans her escape, only to learn that her own mind is a ticking time bomb... and Mother has one last secret that will destroy them all. (From Goodreads)

My Life is just about perfect.

Evelyn (or Evie) lives in an underwater city called Elysium. Located deep within the ocean, the community was created to escape the violence on the Surface. The leader of the people is Mother, and Evie is Daughter of the People, chosen because of her exceptional genes. The residents of Elysium are distrustful of the Surface above, and Mother is not happy when a Surface Dweller named Gavin finds his way into her city. Tasked with getting information out of him, Evie learns instead that everything she knows is a lie and that it is Mother whom she should have feared all along.

The underwater setting of Elysium fascinated me. I've never read a book that takes place on the ocean floor but does not involve mermaids or submarines. I loved the uniqueness of the setting, as well as how well it was crafted. If not for Mother, I'd want to live there myself (or at least visit). I was not surprised that Gavin kept getting distracted by the wonder of his new surroundings. It is clear that the author also thought through practical problems of dwelling in the ocean, including how would you get a sustainable community to live on the ocean floor?

I also loved the tone of Renegade. The beautiful, almost peaceful setting added to the creepiness of the story. The author also used repetition to demonstrate the ways that Evie's mind has been manipulated by Mother. Even the careful front that Mother portrays to the world, and the way the citizens refer to her as Mother creeped me out. I could physically feel the tension building as these characters fought to stay one step ahead of her. As the story builds, Evie's carefully constructed world unravels more and more until there was nothing left of her "just about perfect" life.

A love story develops between Evie and Gavin, the "Surface Dweller" who finds his way into the community of Elysium. While I grew to really like Gavin, there was absolutely no buildup in his relationship with Evie, which left me feeling uneasy and scrambling to catch up to how they felt about each other. Evie trusted Gavin almost immediately, although there was really no reason that she should have. I wish there had been more tension between Evie and Gavin as they got to know each other. Instead this was a bad case of insta-love combined with insta-trust that did not work for me (I actually don't mind insta-love if it handled well). Unfortunately, I wasn't able to get over my unease over their quickly developing relationship as fast as I would have liked and that really affected my reading of this book.

That said, Gavin and Evie as a couple did grow on me. I ended up liking them together by the end of the book, and I'm looking forward to more of them in the future. Their relationship does become more complicated and thus more interesting about 65% of the way through this novel, and I really liked that development. At that point there is a big revelation, which surprisingly, did surprise me - although I should have seen it coming.  I became more interested in Evie at this point as well.

Renegade takes place over a few days and the majority of the story is about Evie and Gavin trying to stay one step ahead of Mother and escape from her with their lives intact. Along the way they learn what is really going on in Elysium in more and more frightening detail. This book is essentially a psychological thriller set in a dystopian world. I really like the idea of this combination of genres, but the Escape Plot in this book made me feel restless at times. Evie and Gavin encounter constant set backs, and I became frustrated with the slow progress of their journey. I got tired of "we made it to this place, but now we have to backtrack in the complete opposite direction to do this important thing before we go any further." I don't think this would have been a problem for me if I had been more invested in their relationship. But I think my uneasy feelings about them together bled over into how I felt about the plot.

Despite my issues with Renegade, I'm really glad that I read this book, and was happy with its resolution. The book also leaves the reader with a lot of questions, and I am looking forward to reading the next installment to find out their answers. We have a lot more to know about Evie and Gavin, and the world in which they live.

A note on the cover:
I was not impressed with this cover when I first saw it. It seemed like the standard YA-girl-in-a-prom-dress cover had been taken to a new and cheesier level. I kept thinking Bachelorette rose ceremony (oh dear!). BUT I am excited to say that this is cover depicts this novel very well, from the background to the rose in the model's hands. It will all make sense when you read this book.

Radom connections:
While I read Renegade, I kept thinking that this author must have loved The Little Mermaid as much as I did as a child. Although this isn't a mermaid book, it takes place under the ocean and these characters - except for our main mermaid girl Ariel Evie - share a fear of all things surface related. I kept singing "Under The Sea" in my head as I read this book.