Eternally Yours by Cate Tiernan

NOTE: Eternally Yours is the third book in a series. See my spoiler free reviews of Immortal Beloved and Darkness Falls. I tried to make this review as spoiler free as possible, but if you're new to the series, I recommend you look at my review for the first book. 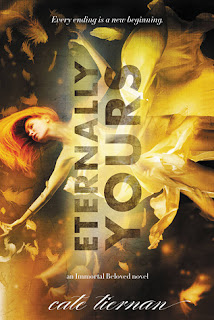 After 450 years of living, Nastasya Crowe should have more of a handle on this whole immortal thing....
After a deadly confrontation at the end of Darkness Falls, the second Immortal Beloved novel, Nastasya Crowe is, as she would put it, so over the drama. She fights back against the dark immortals with her own brand of kick-butt magick...but can she fight against true love? In the satisfying finale to the Immortal Beloved trilogy, ex-party-girl immortal Nastasya ends a 450-year-old feud and learns what "eternally yours" really means.
Laced with historical flashbacks and laugh-out-loud dialogue, the Immortal Beloved trilogy is a fascinating and unique take on what it would mean to live forever. (From Goodreads)

In Eternally Yours we come to the end of Nastasya's journey. Or rather, we come to the end of the small glimpse of Nastasya's long life that we've had the privilege to see. After being inside of Nastasya's head for three books I am a huge fangirl of hers. She is witty and hilarious and seems human and real, despite her advanced immortal age. Her strong voice is one of my favorite parts of this series. If I were an immortal and wanted to read some contemporary fiction, this would be the book I'd pick up. Reading the Immortal Beloved series in a week, I could visually see Nastasya’s growth over time. Her struggles and fears were tangible, and watching her work through them was hard but extremely rewarding - and fun. I laughed out loud a lot in this particular book, mostly because of Nastasya's amusing inner monologue.

One of my favorite elements about Eternally Yours is that we get backgrounds on many of the other characters at River’s Edge who we’d only previously seen in the present. As much as I’d loved to have known more about them all before, what makes sense about not getting them until now is that Nastasya is finally at a place where she’s able to look outside herself and make friendships with others. I think this information would have been too much for her to take in before. The ability to care for others and make friends is a big part of Nastasya’s growing up process.

Nastasya's romance with Reyn has slowly developed throughout the series and in this book it finally becomes more prominent in the the story. Although tentative throughout most of these three books, I've actually thought the gentle pace of their relationship fits perfectly with Nastasya's personal growth. In the first installment of this series River told Nastasya that she had to learn to love herself before she could open herself up to love from others. I think Nastasya's journey to forgiving and finding value in herself is the major crux of her growth process. Fans of romance, Eternally Yours includes some deliciously swoony moments too.

The overarching supernatural plot-line also culminates in this installment, and as much as I thought everything would be predictable, I was surprised about who the villain was revealed to be. I've seen some reviews where people talk about the ending being rushed and not explosive as it should be, but I actually think it’s done perfectly, including the last chapter, because this book has always been about Nastasya. I absolutely love how the story continues in this installment and yes, how it all ends.

Cate Tiernan excels at making her stories feel like living breathing worlds with complex, real people. Every single character in this series seemed like they had a bigger story behind them, though we were only able to see a small glimpse of many of them. The ending of this series complimented this feeling well, because though extremely satisfying, not everything is perfectly wrapped up. But still, my only complaint is that we couldn’t we couldn’t have more time with Nastasya, her friends and this world.