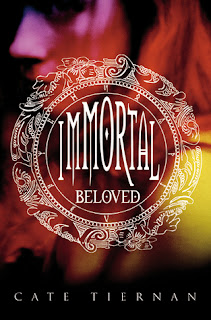 Nastasya has spent the last century living as a spoiled, drugged-out party girl. She feels nothing and cares for no one. But when she witnesses her best friend, a Dark Immortal, torture a human, she realizes something's got to change. She seeks refuge at a rehab for wayward immortals, where she meets the gorgeous, undeniably sexy Reyn, who seems inexplicably linked to her past.Nastasya finally begins to deal with life, and even feels safe--until the night she learns that someone wants her dead.

NOTE: This series is fully published and I read it in a week! These books read really well in succession. Although this review is spoiler free and only for the first book, I did write it after I finished the series, so it has a 'series review' feel to it in some of my comments.

Nastasya* Crowe is old. She is 459 to be exact, although she still looks like she’s 17 and can usually be found acting like it too. She has been floating through life from one party to another for hundreds of years, until the night her best friend does something that scares her. Completely freaked out, Nastasya runs away. Because Nas can’t come up with a better option, she escapes to River's Edge, a rehab-like facility for immortals. Her goal is to stay a few days until she figures out what to do next, but something about River and her home forces Nas to confront her painful past. Although that scares Nastasya more than anything else, she feels compelled to stay.

I mentioned in a review I wrote earlier this week that a strong protagonist voice always makes a book stand out to me. After being inside of Nastasya's head for three books in a row, she is definitely on my Top Favorite Female Voices list (or she would be if I had one). I absolutely loved listening to her think and speak and do. The thing is, Nastasya is not very likable at first. She is selfish, self-indulgent, self-centered and shallow, but I was still easily able to emotionally connect with her from the beginning. Nastasya is also hilarious, and says whatever she thinks, especially when it’s something she should probably keep her mouth shut about. But Nastasya’s quick wit also hides some deep hurts. This poor girl's struggles with guilt and pain hurt my heart! Nastasya’s layers run deep and Tiernan expertly peals them back throughout this book.

A lot of paranormal books feature characters that are immortal; in fact, it is almost a requirement for a PNR. But very few handle it like Immortal Beloved does.  Instead of featuring a character that becomes immortal, or discovers that she is one, Nastasya has already lived a very long life when we meet her. What we get to see from her voice is the burden of immortality. What it’s like to live so long unchanging and face hundreds of years of loss, struggles and life along the way. All of that has greatly affected Nastasya. It also has a lot to do with how she's lived her life in recent centuries. River’s rehab program is different from any one I’ve ever seen, because it is for people who have endless years behind and before them. But I grew to believe in its effectiveness (and begrudgingly, so did Nastasya). There are a few immortals in other books that I'd like to send there too.

Because Nastasya has lived for so long, to get to know her, we need to get to know her past. I despise don't usually care for extended flashback scenes, but I was impressed with how well the ones in Nastasya’s narrative served to emotionally tie me to her. They are well placed and give the reader enough information to get to know her and her history, without it overwhelming the present action. I don't think I could have understood her as well as I did, without those sections.

The other element about Immortal Beloved that stands out to me is the fact that it’s primary focus is on the inner struggle and character development of Nastasya. Although there are some bigger paranormal story elements at work, this is primarily a book about Nastasya’s self-discovery and personal growth. Despite the fact that she and the other characters are immortal and view life very differently than you or I would, this story felt like contemporary fiction to me in places. And though Nastasya looks like a teenager and has been living like a spoiled youth for centuries, she has been all grown up forever, and has experienced hundreds of years of grown up things. Because of that, I think this story has great crossover between YA and Adult audiences.

Although I’ve primarily talked about Nastasya in this review, there are many other characters introduced, which I also grew to love (or loathe) as I read through this series. One of them is the guy that becomes Nastasya’s love interest. Reyn is the first person that Nastasya meets at River's Edge, which is unfortunate, because he’s not very welcoming at all. In fact, he doesn’t seem to want her there. But Nastasya thinks there’s something familiar about him, though she can’t place him. Eventually she discovers why that is, and all I can say is WHOA. Reyn is very hard to read at first. He’s pretty much the definition of taciturn, especially when he’s around Nastasya. But there is a reason for everything, and like Nas, his layers run very deep. I was a bit unsure of him and them after reading this book, but I love how their relationship builds slowly throughout the series.

The Immortal Beloved series is written as one continuing story line split over three books, and I’m very glad that it is now fully published so I could read it back to back. The end of Immortal Beloved isn’t really a huge climactic moment, but it felt like the close of the first chapter in Nastasya’s growth. Having been able to read the series as I did, I like the way that the story unfolded throughout the three books.

I fell in love with Nastasya, Reyn, River and the entire Immortal Beloved series. Have you read these books yet?

Love Triangle Factor: None
Cliffhanger Scale: Mild – no great immediate danger, but clear that the overarching story is incomplete.

*I think the biggest struggle I had with this series is Nastasya's name (Nastasya, Nasty, Nas). Not only is it tricky to spell, but it just doesn't roll off the tongue easily. Thankfully, Nasty changes her name frequently, because I don't think I could call her that indefinitely.

**Are you wondering what type of immortal Nastasya is? For some reason I went into this series thinking that she was going to be a vampire. Nope. If I were going to equate her to something, it would be a witch. But these characters are wonderfully unique.