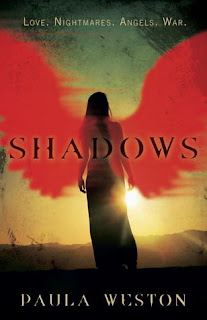 It’s almost a year since Gaby Winters was in the car crash that killed her twin brother, Jude. Her body has healed in the sunshine of Pandanus Beach, but her grief is raw and constant. It doesn’t help that every night in her dreams she kills demons and other hell-spawn.And then Rafa comes to town. Not only does he look exactly like the guy who’s been appearing in Gaby’s dreams—he claims a history with her brother that makes no sense. Gaby is forced to accept that what she thought she knew about herself and her life is only a shadow of the truth—and that the truth is more likely to be found in the shadows of her nightmares.Who is Rafa? Who are the Rephaim? And most importantly, who can she trust? (From Goodreads)

Gaby Winters lost her brother Jude a year ago in a tragic car accident and the pain from losing her twin is still vivid and raw. She's been living in a bungalow at a beautiful beach on the coast of Australia, working at a library and trying to recover emotionally. One evening when she's at the local bar with her friend and roommate Maggie, Gaby comes face to face with the man of her dreams. Literally. Every night Gaby dreams of fighting demons alongside a beautiful stranger that she's named Matt in her head. When a guy looking exactly the same shows up in town, Gaby has no idea what to think. He tells her that his name is Rafa, and boy does he have a crazy story to share. Gaby can't believe it. Rafa says he knew Gaby's brother Jude, and because of that she's desperate to find out more. What he tells her will change everything.

This book surprised me.

One of the best decisions I made was going into this story without knowing anything about it but the description above, and even that I didn't read very closely. It was fun being as clueless as Gaby and discovering the truth right along with her. I encourage you to do the same.

I love books where nothing is as it seems and surprises are around every corner. Not only that, but Gaby is told a lot of different versions of similar events and must figure out what to believe and who to trust. I can't even imagine sorting through that! I will admit to the fact that she did drive me a little bit insane in places, because of her stubbornness and resulting choices. However, I really can't blame her for not knowing what to do in every minute. I admire her for how she kept going forward despite everything she faced. Which was a lot. Gaby is one tough chick, with an inner core of steal, and I cannot wait to watch her develop throughout this series.

This book made me ache for someone I've never met.

Gaby is broken over the loss of her twin brother Jude and the pain of missing him transferred off the page to me. I am always amazed when an author can bring a character to life who is never present in the book, and I left this story with a deep sense of loss and an acute longing to know Jude for myself. Plus, he left behind some tantalizing secrets. Jude is seriously one of my top 3 favorite characters in this book and he only shows up in brief flashbacks. I do not have a brother, but Jude made me long to have one of my own. That's how real he came across to me.

This book had me in a dead swoon.

From the moment Rafa came on screen his chemistry and tension with Gaby was off the charts. Of course nothing is ever simple and discovering who he is and what he wants is part of the fun of the plot. Rafa is also in my top favorites of this story. Gaby and Rafa have a complicated road ahead of them. You need to read this book to find out what I mean by that.

This book is about angels.

Yes, Shadows is a book that feature angel lore. I don't really want to say anything about what that entails, except that I found this mythology to be interesting and well developed so far, but I still have lots of questions and I'm hoping for more details as the series continues. I'm eager to know even more about this world and the characters in it.

I've read a lot of Angel books, but none set in Australia. I loved the setting of this book. Coastal Australia is one of my favorite bookish locations. Okay, coastal anywhere is. The gorgeous sea town in which Gaby lives is sunny and beautiful despite the chaos going on in Gaby's life, making it the perfect contrasting backdrop. I also enjoyed exploring several other places that I always love to revisit in real life and in books. Hopefully, we get lots more of them in the future installments.

Shadows is a fast paced, surprising and swoon-inducing beginning to the four book Rephaim series. These characters have a long journey ahead of them, and I'm going to be there every step of the way. You should too.

Book 2 Haze is out in Australia, though it's not coming out in the US until September 2014. Book 3 will be called Shimmer.

Love Triangle Factor: None
Cliffhanger Scale: Mild - No immediate danger, and these characters have a plan for the future. However, this is very clearly the beginning of a series and many questions are left unanswered.

*Copy received in exchange for an honest review.
Posted by Lauren @ Love is not a triangle at 12:00 AM