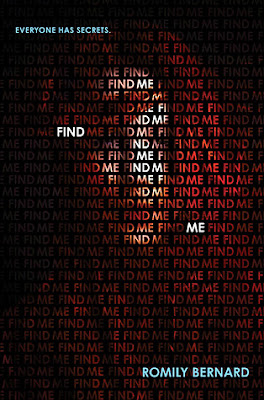 “Find Me.”
These are the words written on Tessa Waye’s diary. The diary that ends up with Wick Tate. But Tessa’s just been found . . . dead.
Wick has the right computer-hacking skills for the job, but little interest in this perverse game of hide-and-seek. Until her sister Lily is the next target.
Then Griff, trailer-park boy next door and fellow hacker, shows up, intent on helping Wick. Is a happy ending possible with the threat of Wick’s deadbeat dad returning, the detective hunting him sniffing around Wick instead, and a killer taunting her at every step?
Foster child. Daughter of a felon. Loner hacker girl. Wick has a bad attitude and sarcasm to spare.
But she’s going to find this killer no matter what.
Because it just got personal.
________________________________________________________________________

Wick is a hacker, and she's very good at it. She especially likes that it's something she can do on her own, without relying on anyone else. Wick lives with her sister and a foster family that is miles better than when she used to live with her controlling, criminal father. However, Wick still feels like an outsider in her life and is determined not to get too comfortable. When Wick's classmate - and former friend -  Tessa Wayne commits suicide, Wick is understandably shaken, but she doesn't think it has anything to do with her life. That is until Wick receives Tessa's diary and finds out that something happened to Tessa when she was alive, that she kept carefully hidden until she couldn't take it anymore. Wick's own sister Lily might be next, and Wick will do anything to protect her.

Find Me focuses on three main plot lines. The first revolves around Tessa Waye and what really happened to her in the months before she committed suicide. I don't want to say a lot about this, except that Wick will do anything to prevent her sister Lily from experiencing the same fate. She is determined to use her hacking skills to expose the secrets of the person responsible

The second major plot direction focuses on Wick's less than stellar dad, who has disappeared off the radar, although he is wanted by the police for his criminal activities. Wick and her sister are finally in a stable foster home in a nice neighborhood, but Wick knows that he could return at any time. If her dad wants something from her, there's nothing she can do to escape his control. When Wick gets a call about a "job" from her father's friend, she knows she has no choice but to go and see what it is.

The third part of the story involves a boy from Wick's school. Griff lives in Wick's old neighborhood, and somehow, despite Wick's protests, he also becomes tangled in Wick's life. Although Wick's not sure if she can trust him (she doesn't trust anyone), she finds herself falling for him. This is the romance portion of the plot.

Plots two and three were clear favorites of mine. While the main mystery surrounding Tessa kept me on the edge of my seat, it isn't really my thing. Plot one went into a psychopathic direction that always freaks me out. Any time there's possible preying on young girls, I usually try to avoid the book. However, I really liked that Wick is a geeky hacker who gets thrown in dumpsters, and I was interested in her own struggles to balance her past and her present life. I actually wish that this part of the novel had been explored even further.

Find Me was entertaining, fast paced and it kept me turning the pages. I also really liked Griff, but I am a sucker for those tortured boys. However, I found some of the plot to be predictable, and the story was a tad far-fetched, at least in the fact that a few characters seemed overly suspicious (though I do appreciate that it was tough to tell the truth behind every character). I think that might have been one reason why I didn't feel like I got to know many of the characters well: most of them were suspects. I also figured out the "bad guy" before Wick did. Even so, I was on the edge of my seat during the last 1/4 of the book. Although I wasn't completely surprised by everything in this story, and was pretty nervous about one of the plot lines, overall this book was a positive reading experience.