Where the Stars Still Shine by Trish Doller 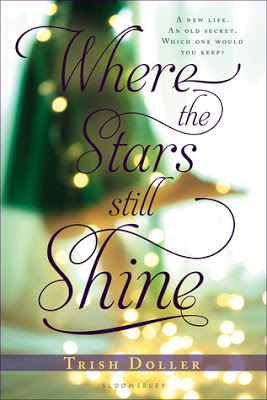 Stolen as a child from her large and loving family, and on the run with her mom for more than ten years, Callie has only the barest idea of what normal life might be like. She's never had a home, never gone to school, and has gotten most of her meals from laundromat vending machines. Her dreams are haunted by memories she’d like to forget completely. But when Callie’s mom is finally arrested for kidnapping her, and Callie’s real dad whisks her back to what would have been her life, in a small town in Florida, Callie must find a way to leave the past behind. She must learn to be part of a family. And she must believe that love--even with someone who seems an improbable choice--is more than just a possibility.
Trish Doller writes incredibly real teens, and this searing story of love, betrayal, and how not to lose your mind will resonate with readers who want their stories gritty and utterly true.

I've had Where the Stars Still Shine on my kindle for months, and finally read it the day the book released. I loved Trish Doller's debut Something Like Normal, and heard really great things about her second novel, but for some reason I was paralyzed by it. Rumors of an "open ending" and big issues, made me wary. Instead of fretting, I wish I'd just opened this book and started reading, because it's good. And not at all scary, if you're wondering. This is one of those "what was I thinking?" moments, where I psyched myself out unnecessarily. Though maybe that just made the book all the sweeter when I finally read it.


What struck me most about Where the Stars Still Shine is how real it feels. How honestly all the characters were drawn. They are complicated and messy, but that just made them more true. Even Callie's mom, who is painted in mostly negative ways, was complex. She's definitely a crappy mother, but is also struggling with a serious mental illness. Although that's not an excuse, it was impossible for me to hate her. In fact, this book is filled with richly drawn characters: Callie's dad Greg, her cousin and new friend Kat, the feisty bookstore owner Ariel, and of course Alex Kosta, are just a few you'll meet.

Before I started this book, I was worried that I wouldn't be able to connect to Callie, because we're so different. But I was able to sympathize with her immediately. Callie's distress at going from always on the run with only her mother, to living with her dad in a town where everyone knows everyone else and has lived there forever, is a palpable struggle for her. She has never lived in a place long enough to become attached to it or the people there, and so she has to figure out simple things like what it means to be a friend, how to relate to a parent who worries when she disappears without telling him, and what are normal behaviors when a guy says he likes you.

The romance in this story began quickly, and it made me a tad uncomfortable at first. However, in the context of Callie's life I could understand it, and I ended up falling for Alex as much as Callie did. They both have big issues to deal with and neither is perfect, but they are also surprisingly really good for each other. Coming from a family of divers, I greatly appreciated Alex's connection to diving, and loved learning all about sponges. The day he takes Callie snorkeling is one of my favorite moments in the book.

Although Callie undergoes some pretty serious changes throughout this story what I love most is that the author doesn't try to fix her. Or anyone else for that matter. Life is an ongoing process and people are still messy. Instead of feeling depressed by by the way this story ended, I felt hopeful. Things are going to be okay for Callie, or rather, better than okay. For that, I think the ending of Where the Stars Still Shine is rather perfect.