Early Review: The Boy Most Likely To by Huntley Fitzpatrick 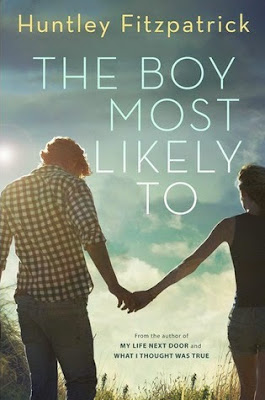 The Boy Most Likely To
by Huntley Fitzpatrick

Surprises abound and sparks ignite in the highly anticipated, utterly romantic companion to My Life Next DoorTim Mason was The Boy Most Likely To:- find the liquor cabinet blindfolded- need a liver transplant- drive his car into a houseAlice Garrett was The Girl Most Likely To:- well, not date her little brother’s baggage-burdened best friend, for starters.For Tim, it wouldn’t be smart to fall for Alice. For Alice, nothing could be scarier than falling for Tim. But Tim has never been known for making the smart choice, and Alice is starting to wonder if the “smart” choice is always the right one. When these two crash into each other, they crash hard. Then the unexpected consequences of Tim’s wild days come back to shock him. He finds himself in a situation that isn’t all it appears to be, that he never could have predicted . . . but maybe should have.And Alice is caught in the middle. Told in Tim’s and Alice’s distinctive, disarming, entirely compelling voices, this return to the world of My Life Next Door is a story about failing first, trying again, and having to decide whether to risk it all once more.
_____________________________________________________________________________

The Boy Most Likely To is about three things: Tim Mason's growth as he deals with backlash from his wild past, The Garrett's continued struggles after the events of My Life Next Door as narrated by daughter Alice, and a building romance between Tim and Alice. For me, all these elements worked together brilliantly, but it's important to know going in that this isn't just a love story.

Here's my 5 point breakdown of The Boy Most Likely To -

1) I was worried about starting this book. I loved Tim from My Life Next Door, but he also was a complete disaster. However, immediately, I found Tim's voice to be clear and feel very honest. Despite all the mess Tim's made of his life, he's incredibly sympathetic and relatable, as well as funny. I loved being inside of his head.

2) This book splits the narration between Tim and Alice Garrett. I found Tim's voice to be the strongest, but I enjoyed Alice's addition. Partially because I liked getting the Garrett side of things, but I also enjoyed the balance within the challenges and changes they both experience. However, there were a few times I didn't find it to be necessary to switch to Alice's perspective (I wanted more Tim!). Also, sometimes, I found it a tad confusing when the point of view switched mid scene. They have distinct voices, so it was more about me needing to quickly move from one mental space into another. Thankfully, each narrative is written in a different font, which helped visually.

3) Of course I loved hanging out with the Garrets again. They are so vibrant and the dynamics and dialogue between them was a favorite part of this book. I wish I could visit the Garrett's kitchen too! The chance to see Jase and Sam again was also a treat. They make my heart flutter.

4) This book has a slow and swoony romance between Tim and Alice. I loved watching them open up and make their way to to each other. It doesn't happen quickly and there are misunderstandings and fights along the way, but all of that made it more real and sweet in the end. Don't worry, this book has no love triangles!

One slightly spoilery thing I wanted to mention about a plot thread concerning Brad that I wish had been addressed more:

5) Even more than a romance, this book is all about Tim, and his growth is amazing to watch. He goes through some tough stuff along the way and sometimes I was afraid that he - and I - would be completely weighed down by it all. But Tim continued to surprise me again and again, though I shouldn't have underestimated him. I especially loved the moments when Tim realized he couldn't do it alone. Or when others around him realized it for him and came along side him. It made my heart happy to see Tim begin to surround himself with people who could truly see him, and not just all of the times he's screwed up. We all need people like that in our lives.

Love Triangle Factor: None
Cliffhanger Scale: Standalone - Will we hear from another Garrett again? Probably wishful thinking, but I'm so sad to say goodbye to them!