The Heart of Betrayal by Mary E. Pearson 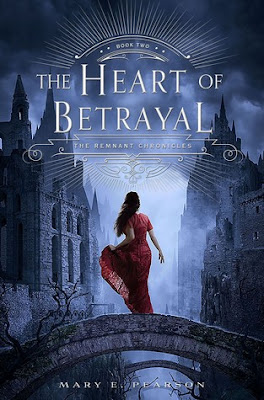 The Heart of Betrayal
by Mary E. Pearson

Intrigue abounds in this hotly anticipated sequel to The Kiss of Deception!
Held captive in the barbarian kingdom of Venda, Lia and Rafe have little chance of escape. Desperate to save her life, Lia's erstwhile assassin, Kaden, has told the Vendan Komizar that she has the gift, and the Komizar's interest in Lia is greater than anyone could have foreseen.
Meanwhile, nothing is straightforward: there's Rafe, who lied to Lia, but has sacrificed his freedom to protect her; Kaden, who meant to assassinate her but has now saved her life; and the Vendans, whom Lia always believed to be barbarians. Now that she lives amongst them, however, she realizes that may be far from the truth. Wrestling with her upbringing, her gift, and her sense of self, Lia must make powerful choices that will affect her country... and her own destiny.
___________________________________________________________________________

The Heart of Betrayal is the sequel to The Kiss of Deception, and it is a good follow-up. I had mixed feelings about the first book because of the love triangle that wasn't. You all know how that worries me! And while there were a few "it's not really a love triangle elements" that were a struggle for me in this one (which won't bother most people btw), overall this was a stronger and more solid read for me. Two of my favorite elements of the first book were Lia herself, and the complex political situation brewing between three countries, personified in Lia, Rafe and Kaden, all of which we got much more of in The Heart of Betrayal.

Lia remains one of the best parts of this series. In the second installment, she is fierce and determined despite all the angsty situations she's thrown into. She will do anything she has to to protect herself and especially the people she loves. Some of those choices were hard for me, but I respect her so much for her perseverance. If you remember at the end of The Kiss of Deception, a captured Lia was taken into Venda by Kaden. In this next book we see the foreign country for the first time. Venda is a very different place than Lia's home. But I loved that we were able to see the beauty of the land and its people through Lia's eyes, despite her being trapped there against her will. Though I didn't find much beauty in the Komizar. He was frightening!

Rafe and Kaden are still present and vying for Lia's affections, but thankfully, I thought her romantic choice was clear throughout this book. We also got to see the true romance build more, which I enjoyed a lot. Kaden, especially, became more complex in this story, as we see him in his homeland and learn more about his past. And of course, I loved getting to know more about Rafe now that we and Lia knows his true identity. However, deceptions still abound in this book. Although we know who everyone is this time, Lia is playing a very careful game of survival and one wrong step could spell destruction. I admire her so much for keeping her head straight and her goals in mind despite it all.

While in Venda we learn more about this history of this world and the magic in it, but though a lot of pieces were shown to us, I'm still not certain how they all fit together. I'm not sure that I understand Lia's Gift, or the secret role we discover some other nations are playing in this book. I'm definitely eager to make it to the finale and get more information about everything that is going on behind the scenes, as well as how the past and Lia's Gift works into this story.

The end was thrilling and tense, though I have mixed feelings about the cliffhanger. It's not my favorite type (If you want to know more about why, check the comments under my Goodreads review.) but I'm definitely eager to follow these characters into the final installment. The story has been set up quite nicely for a huge explosive ending!

Love Triangle Factor: None - highlight for spoiler: But at least mild in practice. Lia is forced to kiss other people to keep up appearances. I'm not gonna lie, this was tough for me. But it is done out of necessity. Lia wasn't confused about who she wanted.
Cliffhanger Scale: Medium/High - Highlight: This one didn't stress me out as much as some others, though it is a traditional cliffy in that a characters are in danger. But the romance felt much more settled by the end, which helped a lot!

After two weeks off from blogging when I traveled to Atlanta sans my computer, I'm back! The summer is going to be a bit slower for me blogging wise, as I have less free time overall and have been choosing to spend it reading instead of online. But I'm still around on Twitter, Goodreads and Instagram, and will hopefully be posting more regularly here from now on. I appreciate anyone who takes the time to stop by for a visit. Love you all!


Here are two of my Instagram pictures from my recent trip to Georgia: 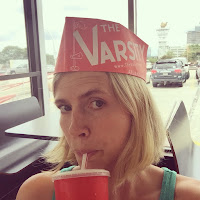 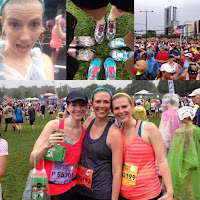 Drinking a Frosted Orange at The Varsity, an Atlanta staple
(Simon also orders from there at the end of Simon vs.)
Running 6 miles in the rain on July 4 with my sisters and 60,000 other people.