The Martian by Andy Weir 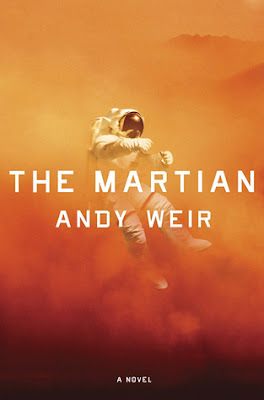 The Martian
by Andy Weir

Six days ago, astronaut Mark Watney became one of the first people to walk on Mars. Now, he's sure he'll be the first person to die there. After a dust storm nearly kills him & forces his crew to evacuate while thinking him dead, Mark finds himself stranded & completely alone with no way to even signal Earth that he’s alive—& even if he could get word out, his supplies would be gone long before a rescue could arrive. Chances are, though, he won't have time to starve to death. The damaged machinery, unforgiving environment or plain-old "human error" are much more likely to kill him first. But Mark isn't ready to give up yet. Drawing on his ingenuity, his engineering skills—& a relentless, dogged refusal to quit—he steadfastly confronts one seemingly insurmountable obstacle after the next. Will his resourcefulness be enough to overcome the impossible odds against him?
_________________________________________________________________________

Personal reflection:
I am not overly militant about reading the book before seeing the movie. A book is a much bigger emotional investment to me than a movie, and I have a lot to read all the time, as well as a good sense of what I like and don't like. Sometimes I'm interested in the movie but don't want to commit to the book, and sometimes it is the movie that convinces me to pick up the book. For instance, I saw the first two Harry Potter movies and those hooked me into reading all the books, which I did before seeing any more movies. I'm not sure I'd ever have read the series otherwise, so thank goodness for those early movies!

That is all to say that I've seen The Martian around the reading world for a while and never felt compelled to pick it up, until I watched the movie trailer and became OBSESSED WITH READING THE BOOK IMMEDIATELY. I bought it right away on kindle and audio and started reading with my friend Asheley who felt the same as I did after seeing the trailer. That was the best decision ever, because this book is awesome.

While reading I switched between print and audio, which was fantastic, and something I've never done before. The reader was great and brought the story to life even more. I also convinced my husband to listen to it, and he loved it too. My husband usually reads nonfiction these days, so it was fun to share this experience with him. It reminded us of earlier times before kids (I sound so old here guys!) when we read more books together.

Thoughts on the book:
Mark Watney is stranded on Mars. Part of a mission of 6 astronauts on a 30 sol* visit to the red planet, he gets stuck there during a storm that forces his team to evacuate. Believing Mark was killed during the trek back to the MAV (aka the ship), they follow protocol and leave his body behind to save themselves. Only Mark didn't die at all, and now he has to figure out how to stay alive until he's rescued. The problem is that it's going to be four years before another ship gets to Mars and he's in a facility that was built to last 30 days. The odds are great and the planet unforgiving, but Mark is smart and extremely resourceful, although even that might not be enough to save him. The Martian splits the narrative between Mark's log entries, the scientists and officials on earth trying to rescue him and his crew in-route home.

This book was incredible. Mark's harrowing journey came to life for me, and I felt like I was a full spectator, just as obsessed with him as the rest of his world was. Mark's narrative gets technical in places, as he details the science behind his fight for survival, but that made his story and Mars feel even more real. Those sections are also balanced out well by Mark's snarky voice, which made even the most sciencey parts engaging. I also loved how the author split the narrative between his tale and what was happening on earth. The whole story was amazingly well constructed to pull at both my heart and my anxiety levels.

The Martian is truly a magnificent story of survival, hope and the amazing things that can happen when people work together, despite being faced with ridiculous odds. I cannot recommend it enough to everyone.**

Mark Watney, you're my hero.

*sol is a Mars day, a bit longer than an earth day.
**My only hesitation is for my friends who dislike cursing. There is a good amount of it in this story. It fits in perfectly with Mark's voice, but if that is an issue for you, be warned.