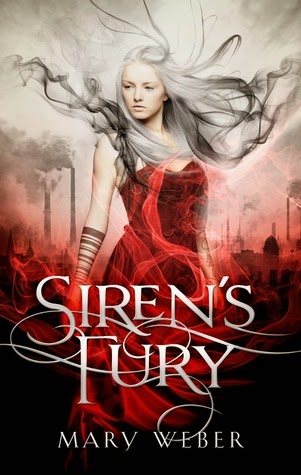 "I thrust my hand toward the sky as my voice begs the Elemental inside me to waken and rise. But it's no use. The curse I've spent my entire life abhorring—the thing I trained so hard to control—no longer exists."
Nym has saved Faelen only to discover that Draewulf stole everything she valued. Now he’s destroyed her Elemental storm-summoning ability as well.
When Nym sneaks off with a host of delegates to Bron, Lord Myles offers her the chance for a new kind of power and the whispered hope that it may do more than simply defeat the monster she loathes. But the secrets the Bron people have kept concealed, along with the horrors Draewulf has developed, may require more than simply harnessing a darker ability.
They may require who she is.
Set against the stark metallic backdrop of the Bron kingdom, Nym is faced with the chance to change the future.
Or was that Draewulf’s plan for her all along?

The end of Storm Siren was one of the worst cliffhangers I've ever encountered, and I had no idea what to expect in the sequel Siren's Fury. But I'm here to say that after book two, I'm still standing! I'm also even more attached to these characters and this world than I was before. Author Mary Weber doesn't make anything easy for her characters or us readers, but I was able to find strength and hope despite the darkness.

One of my most favorite aspects of this series continues to be Nym: the girl with a storm in her veins and fire in her heart who is still fighting her own demons. She has gone through an incredible amount in these two books, and she's gained and lost so much along the way, but she doesn't  stop moving forward. Even when I was worried about her choices - and maybe screaming at her a little bit in this book - I admire her determination and her capacity to learn and fail and grow.

Siren's Fury takes place in a short time frame and is mostly focused on one task that is tied to that evil cliffhanger in Storm Siren. Along the way we get a broader look at this world and the different lands and people that inhabit it. We learn a lot more about the mythology and magic, and what evil Draewulf *shudders* is planning, including seeing more about who he is - and was. I always appreciate getting a broader picture of a story's villain, though I still hope this one is taken out soon.

In addition to spending more time with Nym, I enjoyed the opportunity to get to know several characters better, including Princess Rasha. I was honestly dreading more interactions with Myles, but he has turned out to be much more complex than I expected. And I especially loved the new character Kel, a boy (think young, not love interest age) that Nym meets along her journeys. His role in the story surprised me as well and I definitely want more of him, please!

It's tricky to talk about the romance, but I'll just say that this book was surprisingly romantic - despite the horrifying circumstances certain characters are facing - and there is no triangle at all. The end of Siren's Fury isn't as soul crushing as Storm Siren was. It is happy in some ways and desperate in others. This series has one more book and lots more story to come. I cannot wait for the final installment!

I have a few additional comments that are spoilers for the book:

Love Triangle Factor: None
Cliffhanger Scale: Medium - (Highlight)This one mostly involves a second character, and is not as scary as the one after book one. But it sets the stage or the action in the final book.
Posted by Lauren @ Love is not a triangle at 1:35 PM