The One Thing by Marci Lyn Curtis 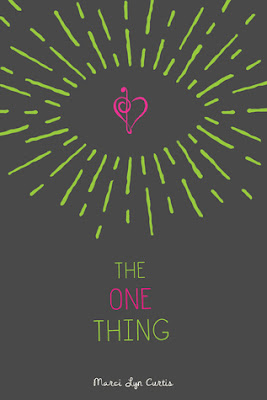 The One Thing
by Marci Lyn Curtis

Maggie Sanders might be blind, but she won't invite anyone to her pity party. Ever since losing her sight six months ago, Maggie's rebellious streak has taken on a life of its own, culminating with an elaborate school prank. Maggie called it genius. The judge called it illegal.

Now Maggie has a probation officer. But she isn't interested in rehabilitation, not when she's still mourning the loss of her professional-soccer dreams, and furious at her so-called friends, who lost interest in her as soon as she could no longer lead the team to victory.

Then Maggie's whole world is turned upside down. Somehow, incredibly, she can see again. But only one person: Ben, a precocious ten-year-old unlike anyone she's ever met.Ben's life isn't easy, but he doesn't see limits, only possibilities. After awhile, Maggie starts to realize that losing her sight doesn't have to mean losing everything she dreamed of. Even if what she's currently dreaming of is Mason Milton, the infuriatingly attractive lead singer of Maggie's new favorite band, who just happens to be Ben's brother.

Prologue
In middle school, I remember having a 'would you rather' like conversation with friends about which of the five senses we'd give up if we had to lose one of them. I'll never forget one of my friends saying she'd give up sight over sound, because she couldn't imagine not hearing or playing music any more. I love music, but sight is the last sense I'd voluntarily give up. After that conversation, I spent a lot of time wondering, what if I did lose the ability to see? Of course, people don't get to make these choices for themselves, not that they'd want to anyway. I thought a lot about that question again while reading The One Thing.

Set-up
Maggie Sanders has been blind for six months from a case of meningitis, and since then everything about her world and the direction of her life has been completely shattered. I sympathized immediately with Maggie. She is depressed and angry and has pretty much shut down since she became blind. She's dropped all her friends and doesn't know how to relate to her parents anymore, especially her soccer star mom, in who's footsteps Maggie was set to follow. No way can Maggie believe this is truly going to be her life...forever. This girl l is a mess, and I can imagine that I would be as well.

Then Maggie meets ten year old Ben Milton who is vibrant and happy despite facing his own difficult circumstances. Most incredibly, Maggie can see Ben. It doesn't hurt that Ben's older brother is the lead singer of Maggie's favorite band. How can she resist hanging out with this boy? Ben brings new color and excitement to Maggie's world, and from knowing him she begins to adjust better to her life. But Maggie is forced to face the realities of her future when she discovers the reason she can see Ben.

Breakdown
What I liked about this book is the fact that I could completely sympathize with how Maggie felt about all of a sudden becoming blind. I could understand why her friendships fell apart and she was struggling to function in daily life, let alone make decisions about college that her parents kept encouraging her to pursue. I could even understand Maggie's parents' struggle to help her, although I did want to shake them a lot. I also got why Maggie wanted to hang out with Ben even though he was 10. Not only was he fun and different, and happy despite his circumstances, but she could see around him. If I was blind, I would be just as excited about the chance to see the world again.

Along with Ben, I enjoyed the other relationships Maggie finds in this book. I really liked Maggie's growing friendship with Clarissa, a girl from her school who was born blind. It was just as humbling to me to find out all the things Clarissa has been able to accomplish in her life. Meeting this girl made me sad for the ways I underestimate people. I also loved the tension and scenes between Mason and Maggie, as well as the music themes. They have a sweet romance that builds slowly in the book, and is not a central focus. I don't mind romances relegated to side-plots, but I wanted a lot more of these two together.

I have been reading slowly recently and this is the fastest I've completed a book in a while, but this is also one of those books that I got antsy to get to the good parts. It takes Maggie quite a while to begin to see things more positively, and I could see where certain things were heading and got impatient to get there. Maggie spends a lot of time in her head in this book, and I wanted  more interactive scenes overall with the people in her life.  Clarissa and Ben & Mason especially. It's not all about new relationships though, as Maggie begins to rethink the way her former friendships fell apart. She's also not getting along well with her parents, though both of these relationships go both ways.

I think Maggie's slow growth and the amount of time she spends in her head, made the many different relationships in this book feel a bit scattered and less impactful. I wanted a bit more balance there. Finally, this is minor, and maybe I missed something, but I was confused about why Maggie was working on a group project for school during summer break.

Conclusion
The One Thing was a book that kept me engaged from beginning to end. I was able to connect well to Maggie's feelings about her circumstances, and I enjoyed the friends she makes in this story. I would have liked more scenes between Maggie the people in her life, including a stronger romance. But overall, I found Maggie's journey to be rewarding and I'd recommend this book.