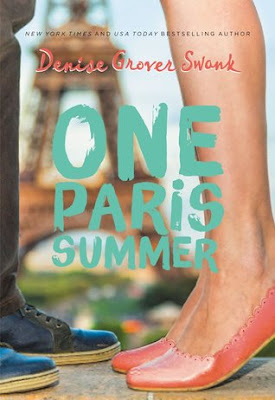 Most teens dream of visiting the City of Lights, but it feels more like a nightmare for Sophie Brooks. She and her brother are sent to Paris to spend the summer with their father, who left home a year ago without any explanation. As if his sudden abandonment weren't betrayal enough, he's about to remarry, and they’re expected to play nice with his soon-to-be wife and stepdaughter. The stepdaughter, Camille, agrees to show them around the city, but she makes it clear that she will do everything in her power to make Sophie miserable.

Sophie could deal with all the pain and humiliation if only she could practice piano. Her dream is to become a pianist, and she was supposed to spend the summer preparing for a scholarship competition. Even though her father moved to Paris to pursue his own dream, he clearly doesn't support hers. His promise to provide her with a piano goes unfulfilled.

I have mixed feelings about this one. Some aspects I liked a lot. Some, I didn't so much. What I loved - I enjoyed the Paris setting and culture, as well as the focus on arts and music through Sophie's piano playing and the sites she visits. But I think my favorite part was Sophie's growth. I loved her transition from the start to the end of the book. In the beginning she is afraid to go anywhere by herself, and by the end she is navigating Paris with ease, but she is also more certain of herself and her own confidence by the end. I really liked how Sophie's relationship with her brother changed from the beginning, though I'd liked to have seen even more of it. Although I'm not sure that I liked either of them, I thought Sophie's parents were both drawn with complexity and flaws (and sometimes dubious advice giving), and I appreciated how real they seemed.

What I didn't love - However, One Paris Summer has a lot of angst and drama all the way through it, and while that kept me reading, it also felt like it was endless and over the top. Sophie's new stepsister Camille was especially despicable, and her behavior became increasingly negative and vindictive, so much so, that this book was hard for me to read. Especially when Dane came and then coupled with the way all her friends continued to support her as she treated Sophie horribly again and again. And I thought the ending was way too easy on Camille!

I also had some mixed feelings about the romance. On one hand, I was thankful there is no love triangle (it seems like there might be at first, but there is not!), and I enjoyed so many of Mathieu and Sophie's interactions. But I didn't care for the way they had to hide their relationship, even though Mathieu eventually explains his reasoning. And I just could not forgive Mathieu for how he treated Sophie at the end. (Spoiler) First, believing Camille and Dane over Sophie was completely unforgivable. But I also did NOT buy that he tried to text her after she left and he was unable to get through, so he gave up without trying another method of communication! I hate when poor technology use is the excuse for drama and not communicating! (end spoiler)

Conclusion - One Paris Summer kept me reading from the beginning. Once I started the book, I had to get to the end. I loved the setting and watching Sophie's growth throughout this story, but a lot of the angst and drama was too much for me, and I didn't fall as much in love with the romance as I'd wanted.

Note: One Paris Summer is published by Zondervan's Blink imprint, which is not Christian based. Beyond an off mention of church, this book has no religious themes in it.