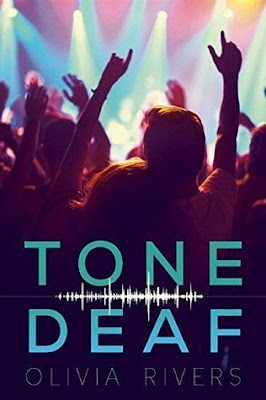 His world is music. Her world is silent.
Description: Ali Collins was a child prodigy destined to become one of the greatest musicians of the twenty-first century—until she was diagnosed with a life-changing brain tumor. Now, at seventeen, Ali lives in a soundless world where she gets by with American Sign Language and lip-reading. She’s a constant disappointment to her father, a retired cop fighting his own demons, and the bruises are getting harder to hide.
When Ali accidentally wins a backstage tour with the chart-topping band Tone Deaf, she’s swept back into the world of music. Jace Beckett, the nineteen-year-old lead singer of the band, has a reputation. He’s a jerk and a player, and Ali wants nothing to do with him. But there’s more to Jace than the tabloids let on. When Jace notices Ali’s bruises and offers to help her escape to New York, Ali can’t turn down the chance at freedom and a fresh start. Soon she’s traveling cross-country, hidden away in Jace’s RV as the band finishes their nationwide tour. With the help of Jace, Ali sets out to reboot her life and rediscover the music she once loved.
______________________________________________________________________________

I have been dying to read this book ever since I did a cover reveal for it last fall, and I'm happy to report that I enjoyed it.

Set up - Ali was on a track to musical greatness before a tumor left her completely deaf. A rock concert featuring a spoiled musician is the last thing she wants to attend, but  she goes anyway to oblige her best friend. Ali's even more dismayed when she wins a backstage tour with the band, and things get worse when she encounters the arrogant lead singer Jase, who seems to hate her because she's deaf. But then Jase notices the bruises that she can't quite hide and offers to help her escape to New York. Desperate to get away from her abusive father, Ali agrees, hoping this is her chance of a new life.

What I loved - Tone Deaf is a great mix of serious themes and a sweet romance, and I'm always a sucker for rockstar romances. Ali is deaf and though I don't know a lot about deaf culture, I enjoyed how that aspect of her - and Jace's - life was put into the book. Although Jase seemed like a jerk at first, it was wonderful to see how much he worked to help Ali once he knew her situation. I really liked watching them begin to open up to each other and the romance that developed between them. Watching Ali and Jase write music together was also a favorite part. I loved that friendships are an equal part of this story, and I'm so glad that Ali had a great best friend, and also the relationships she built with Jase's band mates.

What I didn't love - As Ali was hiding through much of the book, a lot of the story takes place in Jace's RV and I wish I could have gotten more of his life as a performer, and see Ali interact more within his public life (because that will remain a huge part of him). Also if I'm reading it right, it takes the tour bus 3+ days of driving to go from LA to Albuquerque, with no mention of any other tour stops on the way. Were they driving in circles in the desert, bc that's way too long! The entire book takes place over about of 2 weeks, and I wish we could have gotten more of the buildup of Ali and Jase's relationship over more of the tour. So much of the story takes place in the tour bus, and there's only so many different scenes that can occur in that small space. I think the author did a good job making the setting realistic, and the safest place for Ali was on the bus. But I would love to have seen more scenes in different places.

Conclusion - The ending of the book ties a nice bow on the package, which I admittedly don't mind for books like this, although it happens pretty fast. Overall, I enjoyed Tone Deaf and found it to be a sweet romance with some depth and diversity in it as well. Those rockstars get me every time!
Love Triangle Factor: NoneCliffhanger Scale: standalone
Posted by Lauren @ Love is not a triangle at 2:09 PM