A Promise of Fire by Amanda Bouchet

Hi everyone! A quick note before we get to the book thoughts. As you may have noticed, I took a break for the month of July and half of August. I planned to put up a post explaining what I was doing at the time. But it would have broken my break to do that (ha!). However, I'm back now, feeling much more energized about blogging. I've been reading a lot and am excited to start discussing books on here again!

Hope you're all having a happy summer :) 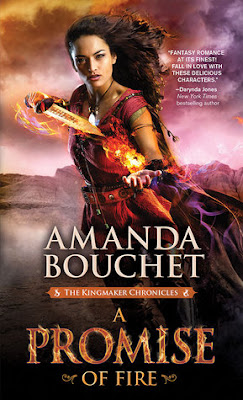 A Promise of Fire
by Amanda Bouchet

Catalia "Cat" Fisa is a powerful clairvoyant known as the Kingmaker. This smart-mouthed soothsayer has no interest in her powers and would much rather fly under the radar, far from the clutches of her homicidal mother. But when an ambitious warlord captures her, she may not have a choice…
Griffin is intent on bringing peace to his newly conquered realm in the magic-deprived south. When he discovers Cat is the Kingmaker, he abducts her. But Cat will do everything in her power to avoid her dangerous destiny and battle her captor at every turn. Although up for the battle, Griffin would prefer for Cat to help his people willingly, and he's ready to do whatever it takes to coax her…even if that means falling in love with her.

I love a good Paranormal Romance, especially one where the featured couple has off the charts chemistry from the very beginning, and spends nearly the entirety of the story together - even if they're fighting for half of that time. I'm also a huge fan of hate to love romances, bonus if they're enemies at first. This book has all of that in spades. I was hooked on this story from start to finish.

Cat has been on the run from her past for years. Recently hiding out as part of a traveling circus troupe, she's worked hard not to reveal the extent of her magical ability or her heritage. But she's unexpectedly, and surprisingly (to her), kidnapped by the new "Beta Sinta" aka the ruling warlord. Realizing that her abilities are far more than she's letting on, Griffin abducts Cat in an effort to protect his realm. Because he's apparently magic-less and she has a great deal of it, this all shocks Cat big time. Although the story begins with Griffin character capturing Cat, it is made very clear that these two are an equal and strong match for each other. I loved watching their different power struggles - neither of them has the upper hand for long. Cat and Griffin complement each other well and push and pull each other in a delicious way.

Besides our two main characters, who really are the star of the show. I loved Griffin's close team of soldiers, as well as his family. I'd love to see stories for some of them in the future! I also really like that this fantasy world features Greek mythology as its basis. The setting felt fresh while also playing with recognizable themes. And of course some chaos is going to happen when you get gods involved.

I loved this entire book, though a few things did bother me. Cat is keeping a secret about her heritage and Griffin still doesn't know what it is by the very end. First of all, I'm not a fan of secret keeping as a catalyst for drama-making. Second, it is SO CLEAR what the secret is right away - to the reader, and it's a little silly that Griffin, or anyone else doesn't put the pieces together. I mean it's basically revealed in the book's description above. I know this is going to cause a bunch of angst in book two, and I'm both excited and dreading it at the same time. Also, this book has a mean girl ex who causes some problems, a trope that I've become very tired of reading about. Plus the antics she pulls become a tad over the time.

However, that's really all very minor in a story that I loved from start to finish. I highlighted practically the entire story, and I'm DYING for the next installment!

Love Triangle Factor: None
Cliffhanger Scale: Low - but definitely more story to come!
Posted by Lauren @ Love is not a triangle at 3:18 PM