The Forgetting by Sharon Cameron 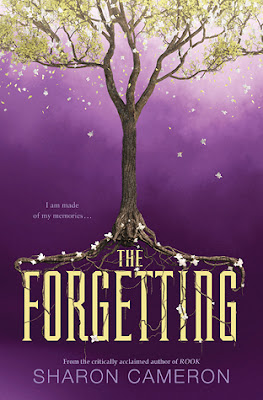 The Forgetting
by Sharon Cameron

Book description: What isn't written, isn't remembered. Even your crimes.

Nadia lives in the city of Canaan, where life is safe and structured, hemmed in by white stone walls and no memory of what came before. But every twelve years the city descends into the bloody chaos of the Forgetting, a day of no remorse, when each person's memories – of parents, children, love, life, and self – are lost. Unless they have been written.

In Canaan, your book is your truth and your identity, and Nadia knows exactly who hasn't written the truth. Because Nadia is the only person in Canaan who has never forgotten.

Every 12 years the citizens in the walled city of Canaan forget their past. They write detailed accounts of their lives in books they keep with them all the time, so that they won't lose their memories when the time comes. Without their books, their past is lost. But Nadia has never forgotten, and as the days draw nearer to another Forgetting, she is determined to keep her family together and avoid getting caught in the chaos that inevitably comes with the event - because people will do crazy things if they know they will not remember it later. I knew very little about this book when I started it, and the story went in many directions I didn't expect, which was awesome. While I was reading, I kept thinking it would turn out to be like the movie The Village, because the idea of an isolated city was similar. But, this book is it's own entity and though it's impossible to talk about much of that without spoiling the story, I loved discovering what this story turned out to be. All I will say is that this is a lot more science fiction than anything else.

I also adored the characters, especially our heroine. Nadia's a quiet fighter. She doesn't talk much and doesn't open up easily, but she's fierce and intensely protective of her family. Nadia has a different perspective on the world than everyone else, because she has never forgotten her past. While they're all afraid of what is beyond the surrounding walls, she regularly sneaks out of the city in search of more. Nadia is very careful, until one day she's caught by Gray, the Glassblower's son. Gray seems at first to be your typical charming hero who's a bit of a player and an opportunist (not my favorite type), but I fell hard for him too, and he proved himself as well. It was lovely watching them slowly get to know each other and see Nadia's walls come down as she began to trust him. They make a great team. I enjoyed watching them work together, plus their romance was goooood.
As time ticks down quickly to the next Forgetting and long held secrets begin to unravel, the intensity and danger of the story picks up. I loved the pacing of when and how the different revelations come out. Nadia is fighting against a lot of factors, not the least is of which is fearing that for a second time, she'll be the only one who remembers.  Basically, The Forgetting had me hooked all the way through. I enjoyed Rook a lot, but this is my favorite of the two Cameron books, by far. I need to read The Dark Unwinding next!Love Triangle Factor: NONECliffhanger Scale: Standalone!
Posted by Lauren @ Love is not a triangle at 12:00 AM