The War that Saved My Life by Kimberly Brubaker Bradley 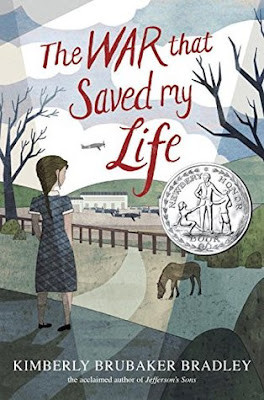 The War that Saved My Life
by Kimberly Brubaker Bradley

An exceptionally moving story of triumph against all odds set during World War 2, from the acclaimed author of Jefferson’s Sons and for fans of Number the Stars.

Nine-year-old Ada has never left her one-room apartment. Her mother is too humiliated by Ada’s twisted foot to let her outside. So when her little brother Jamie is shipped out of London to escape the war, Ada doesn’t waste a minute—she sneaks out to join him.

So begins a new adventure of Ada, and for Susan Smith, the woman who is forced to take the two kids in. As Ada teaches herself to ride a pony, learns to read, and watches for German spies, she begins to trust Susan—and Susan begins to love Ada and Jamie. But in the end, will their bond be enough to hold them together through wartime? Or will Ada and her brother fall back into the cruel hands of their mother?

This book was amazing! Ada's voice and emotions were so real. I was completely wrapped up in her life and her words and completely hooked on her story from start to finish. I started reading via the audiobook, which was very well done. But I switched to the print near the end so that I could read faster. This book is worth reading in either/both formats.

What surprised me the most about this book is how layered it is, as well as the depth of the emotions of these characters. We see the world through Ada's limited viewpoint, while also understanding a much bigger picture of what was happening around and to her. This author doesn't shy away from heartbreaking moments or the painful parts of Ada's life, including living with her mother and the ptsd she suffers from that experience, but watching Ada find her own strength and realizing that people do care for her, was so so rewarding. My heart swelled seeing Ada's perspective change and grow.

The War that Saved My Life features a great cast of characters, my favorite (besides Ada) being Susan Smith, the woman who takes in Ada and her brother. She is not perfect, and isn't sure what to do with these two children she didn't ask for, but she comes to love and need Ada and Jamie as much as they do her. And her journey to open up and love them was more subtle but as lovely to watch as Ada's. I also adored Ada's brother Jamie as well as her new friend Maggie, old Grimes and Stephen White.

Alongside Ada's personal journey was a fascinating - and sometimes frightening - look at Britain at the start of World War II. What a harrowing time in history. I just cannot imagine having to send my children away into the country for an indefinite amount of time, though I'm very glad for Ada and Jamie's sake that it happened. It was amazing to see how much the country came together during this time and the way the people all worked together across class lines to support each other and even look out for spies.

I am dying for the sequel to this book, which I've been assured is being written. I cannot wait to find out what Ada does next and catch up with all of her friends again.

Love Triangle Factor: N/A no romantic love (Ada is 10 in this book)
Cliffhanger Scale: Standalone - I hear word there's to be a sequel and PLEASE!! I feel so invested in these characters' wellbeing, I must know where they go next.