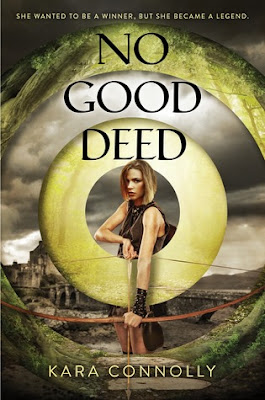 No Good Deed
by Kara Connolly

Book Description: Ellie Hudson is the front-runner on the road to gold for the U.S. Olympic archery team. All she has to do is qualify at the trials in jolly old England. When Ellie makes some kind of crazy wrong turn in the caverns under Nottingham Castle—yes, that Nottingham—she ends up in medieval England.
Ellie doesn’t care how she got to the Middle Ages; she just wants to go home before she gets the plague. But people are suffering in Nottingham, and Ellie has the skills to make it better. What’s an ace archer to do while she’s stuck in Sherwood Forest but make like Robin Hood?
Pulled into a past life as an outlaw, Ellie feels her present fading away next to daring do-gooding and a devilishly handsome knight. Only, Ellie is on the brink of rewriting history, and when she picks up her bow and arrow, her next shot could save her past—or doom civilization’s future.
__________________________________________________________________________

No Good Deed was a lot of fun! This book has a classic world-time travel feel - like a Narnia or Alice in Wonderland, where the main character travels in time (or to a fantasy place) by going through a secret passage, with no explanation of why or how it happens. Without all the science-y explanations that accompany most time travel books I've read recently, this story felt very nostalgic. It also allowed me to focus right onto the plot without a lot of info dumping to explain everything.

In No Good Deed, Eleanor (Ellie), a modern day competitive archer, goes through underground caves at Nottingham Castle and travels back in time to, you guessed it, Sherwood Forest when good King Richard was on crusades and crooked Prince John ruled the land. Ellie has no idea how any of that happened but she's determined to get back to her time. In the mean time, she's going to shake things up, including bringing the legend of Robin Hood to life.

Weaving the well-loved legend of Robin Hood into a fresh tale, one of my favorite parts of this book was the way Robin's supporting cast of characters was introduced, from Will Scarlet to Friar Tuck, all in unexpected ways. Several of them really surprised me, as I got to know them better. And to carry it all, is our Robin Hood, Ellie whom constantly amused me and wowed me with her fearlessness (except about things like the plague) and her ability to adapt to the strangest of circumstances.  No real romance, the focused is very much elsewhere, but there are some nice underlying hints that made me smile.

I had no idea what to expect from the ending, but it wraps everything up very well, and the story reads as a standalone (which I assume it is). My only question is [ how Rob was in the present when Ellie returned. That wasn't explained at all. (highlight for spoiler)].

This was a quick read that surprised me with how much fun it was.

KARA CONNOLLY loves history, though she's never time traveled. She lives and writes in Arlington, Texas. To learn more about Kara and her books go to karaconnolly.wordpress.com or follow @karaconnolly4 on Twitter and @readkaraconnolly on Instagram.