Tour organized by Penguin Teen
See the full schedule below

I have loved following Amani on her adventures since she was a girl living in a small town at the edge of the world. Until she became the Blue Eyed Bandit and escaped that town on a magic horse. This girl has done so much in three books, and the finale to her story is just as exciting as all of the rest.

Read on for my thoughts on Hero at the Fall and my photo inspiration for the story. 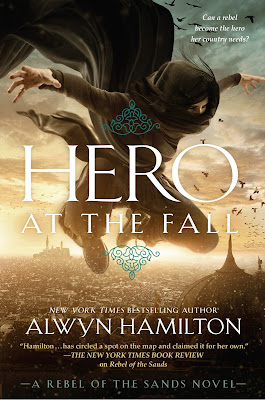 Book Description: When gunslinging Amani Al'Hiza escaped her dead-end town, she never imagined she'd join a revolution, let alone lead one. But after the bloodthirsty Sultan of Miraji imprisoned the Rebel Prince Ahmed in the mythical city of Eremot, she doesn't have a choice. Armed with only her revolver, her wits, and her untameable Demdji powers, Amani must rally her skeleton crew of rebels for a rescue mission through the unforgiving desert to a place that, according to maps, doesn't exist. As she watches those she loves most lay their lives on the line against ghouls and enemy soldiers, Amani questions whether she can be the leader they need or if she is leading them all to their deaths.
________________________________________________________________________

NOTE: Hero at the Fall is the third book in a series. See my thoughts on Rebel of the Sands and Traitor to the Throne. My thoughts may contain minor spoilers for the first two books.

Hero at the Fall is a strong and worthy conclusion to the Rebel of the Sands trilogy. I'm always wary when going into the final installment of a series I've adored, but I had nothing to fear with this one.

I loved the theme in this book about how real people can become heroes that turn into stories told. But those tales cannot contain the small and messy details of a person’s life. I love that we see this concept in action through the alternating chapters featuring stories told about each character. I enjoyed knowing these characters intimately, and beyond what would be said about them in the future. I loved Amani and her fierce love of the sands of her home and her willingness to do anything to protect it. This girl has amazed me this entire series, and I have loved following her through three books. Her magic is also pretty amazing, and I couldn't wait to see what she would do next. The part that takes place on a ship was especially thrilling. And I love that it combined both her and Jin's loves. I loved this band of Rebels fighting together and sometimes dying in the name of the Rebellion and the Rebel Prince. This book definitely has some casualties and brutal moments. But their camaraderie and support of each other through so much made my heart swell. One of my favorite relationships was Amani and Shazi's friendship. I loved the romance between the Blue Eyes Bandit and her Foreign Prince. Seeing a girl of the sand and a boy of the sea fight for each other was so rewarding, especially after the drama of the last book.

I wish we’d gotten a little of Jin's perspective. I know he loves Amani and his close family. But it wasn't always clear where his head or heart were in terms of the rebellion. He was supportive, but I wanted a little more ownership from him, since this nation is part of him too - as much as he sees himself as a foreigner. But a lot of that could be more my perception than reality, since we never get his internal POV. And to Jin's benefit, he is always there for Amani and the mission of the Rebels.

This book features a lot of traveling through the country, and I enjoyed getting to know the people and getting out of the city that Amani was stuck in during most of Traitor to the Throne, but there were a few times that the story slowed for me in the middle.

Also, I wish I’d reread the previous books because I didn’t remember all of the mythology in this world and got a little confused about the different Demdji heroes and powerful Djinni of history. Thankfully, there is a list of characters at the start of the book that was helpful.

To celebrate Hero at the Fall, I took Amani to the beach, which combines her favorite element - sand - with her least favorite - water. Of course, water happens to be Jin's favorite.

Will this hero and her rebel crew be washed away or will the sand rise up and prevail? 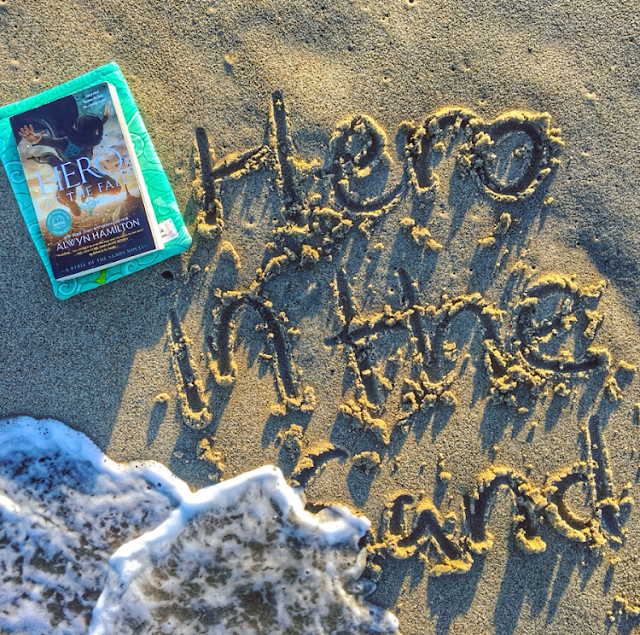 Alwyn Hamilton was born in Toronto and lived between Canada, France, and Italy until the was three, when her family settled in the small French town of Beaune. She studied History of Art at King's College, Cambridge, graduated in 2009, and lives in London.
Author Links: Website | Twitter | Goodreads | Instagram