Thank you Macmillan Children's Books for organizing this tour 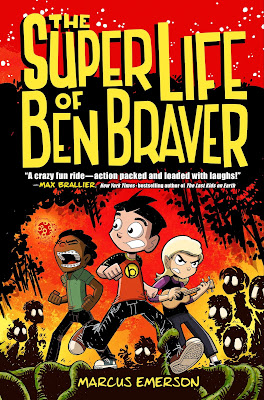 Book Description: Ben Braver is an ordinary kid. All he wants to do is finish his summer watching awesome TV shows and eating his favorite candy. But when some kid screams for help, Ben, like his favorite comic book heroes, tries to save the day. Let's just say it ends badly. But it does lead him to a secret school where kids with super abilities learn to control their powers. Ben's never had any powers—and never thought he could be special. So when he's offered a spot at the school, Ben realizes this is his chance to become the superhero he's always dreamed of. Packed with black-and-white art and comic strips throughout.

Admittedly I do not read a lot of Middle Grade books, and I signed up for this blog tour because I planned to read this one with my son. However I received a copy of the book later than I expected: too late for us to get through it together before the blog tour. Also, for some reason, I thought this was a graphic novel. It is not. The Super Life of Ben Braver is a text novel with hilarious illustrations by the author throughout. But it is primarily words, making it a longer read than graphic would be. All of that is to say that I had to read this book quickly and without my son (we will go back through it at a more measured pace). And what I did not expect is how much fun I would have reading it myself.

Although The Super Life of Ben Braver is definitely targeting superhero loving boys - and girls! - between third and fifth grade, as an adult and a nominal superhero fan, I found myself completely hooked. Laughing and cringing along with Ben Braver and his adventures at Keplar Academy - "a secret school for kids with special abilities." Ben's not exactly sure how he got into this school, especially since it happened after he tried to stand up for someone and landed in a coma for three days. Also he has no idea what his talent is, and Keplar Academy isn't quite what he expected of a school for aspiring superheroes. Still, who wouldn't want to go to a special secret school if given the chance?

Some of my favorite things about this book:

1. From the beginning Ben is relatable. He's a normal boy who's having a lonely summer after his best friend moved away. Then after one failed attempt at bravado, Ben lands himself in a superhero school. And he's just as surprised about it as we would be.
2. I also adored the friendship between Ben and his new friends Noah, Penny and Jordan. I especially enjoyed how Ben and Noah's room became connected to Penny's. These three made me laugh so much.
3. The illustrations peppered throughout this book, introducing the cast and including amusing comic strips, broke up the text and added to the fun of the story.
4. Ben's experience at Keplar Academy and his discovery of his special ability, did not develop exactly like I thought they would, based on other 'superhero' stories I've read and seen. This was refreshing and kept me on the edge of my seat to find out what would happen next.
5. There's a bit of a mystery in this story and I didn't guess how it would play out. The book also ends with some questions left unsolved, though it's not a cliffhanger, and I cannot wait to find out what happens next to Ben.

Although The Super Life of Ben Braver isn't one that I would have picked up on my own, I had a great time reading this story, and superhero loving kids from 7 - 11 will especially love it.

Love Triangle Factor: None - N/A - No romance, though some possible developing feelings for future books.
Cliffhanger Scale: Low. Some set up for the next book, but ends in a settled place with no immediate danger.

Marcus Emerson is the author of several highly imaginative children's books including the popular Diary of a 6th Grade Ninja series and the Secret Agent 6th Grader series. His goal is to create children's books that are engaging, funny, and inspirational for kids of all ages - even the adults who secretly never grew up. He is a 35-year-old comic book reader, video game player, and toy collector.