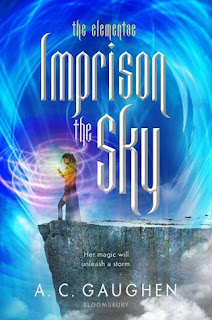 Imprison the Sky
by A.C. Gaughen

Book Description: Stolen from her family as a child, Aspasia has clawed her way up the ranks of Cyrus's black market empire to captain her own trading vessel--and she risks it all every time she uses her powerful magic to free as many women, children, and Elementae from slavery as she can.

But Cyrus is close to uncovering her secrets--not only that Aspasia is an air Elementa with the ability to sail her ship through the sky, but that she is also searching for her lost family. And if Aspasia can’t find her younger siblings before Cyrus does, she will never be able to break free.

NOTE: Imprison the Sky is the second book in a companion series. See my thoughts on Reign the Earth.

These books are just so well written. Filled with wonderfully complex characters, emotions and a looming and brutal war that will span nations. I was a little sad at first to miss Shalia, as this is a companion/sequel. But I quickly grew to love this new narrator and how she fits into the overall series. Imprison the Sky introduces Aspasia (she and her floating ship were briefly introduced in Reign the Earth), a powerful wind elementae who is the captain of a ship of children. They travel the seas and skies collecting goods for trade for a powerful dealer named Cyrus. On their missions, Asp and her crew do some things that are very good but also morally complex, and I enjoyed the questions this book asks about right and wrong, and what it means for someone when lines get blurred and one cannot come without the other. I loved the found family Asp has created out of her crew and the ways she’s fought to ensure they and their loved ones are cared for and safe. While Shalia’s worldview was incredibly narrow at first, Asp has been sailing all over the world for years and in this book we are shown a much broader perspective on what is going on beyond the Trifectate - and how this brewing war with Calix, and what is happening to Elementae, is much bigger than what we saw in the last installment. I enjoyed getting to know the other nations in this world, and begin to see how they will play a role in future books. I loved the way this story expands the world, though it does take quite a while to bring this particular tale back around to the one that Shalia began telling. As I’d just read her story before this one, I was antsy at times to get back to what she and others were doing. That said, we do get to enjoy the presence of a favorite character from the last book, and I was thrilled when Kairos appears here. I think those who read the first book can guess who is the love interest. It’s a bit of a surprise how he showed up, and I loved watching him and Asp get to know each other and fall for each other. They are well matched, and he knows exactly when to push her and when to back off. Although I never care so much about dwelling on past relationships, and this book was a little too angsty for my taste in a few parts (nothing current is happening with anyone else during the book, though), it was clear to see the differences between Asp’s relationship with this new person and anything she tried in the past.
Imprison the Sky is brutal and very emotional in places. What these characters are trying to accomplish is not easy or simple and there have been and will be many casualties along the way. They have a long way to go before their ultimate mission is complete and I’m eager for what’s next (I believe 2 more books are planned). I’m also so curious about who will be the next heroine - and love interest - that we will follow. I have an idea of one of them at least. Love Triangle Factor: NoneCliffhanger Scale: Low/Medium - another heroine’s Story is complete but this story has a long way to go and a lot more danger to come.