Reign the Earth by A.C. Gaughen 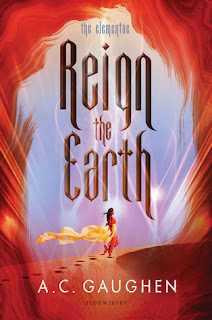 Reign the Earth
by A.C. Gaughen

Book Description: Shalia is a proud daughter of the desert, but after years of devastating war with the adjoining kingdom, her people are desperate for peace. Willing to trade her freedom to ensure the safety of her family, Shalia becomes Queen of the Bonelands.But she soon learns that her husband, Calix, is motivated only by his desire to exterminate the Elementae—mystical people who can control earth, wind, air, and fire. Even more unsettling are Shalia’s feelings for her husband’s brother, which unleash a power over the earth she never knew she possessed—a power that could get her killed. As rumors of a rebellion against Calix spread, Shalia must choose between the last chance for peace and her own future as an Elementae.This intense, richly drawn high-fantasy by the author of Scarletwill hold readers spellbound.
_____________________________________________________________________

I’ll admit that it took me a long time to start this book because I was so afraid of the content. What I knew ahead of time is that Shalia gets married at the very beginning of this story - to the person who ends up being the book’s villain - and her romance is not with him. This all worried me for several reasons. Watching her marry someone like that was not easy. And the romance was tricky to read for sure. But what I didn’t expect was the depth of characters and relationships in this book. Shalia impressed me with her quiet strength and her growing understanding of her own power, both magical and personal. It is hard to watch her journey through this story. This book is depressing and harsh in many ways. And the author did a really great (and difficult to read) job at showing Calix as someone you could almost like at first - maybe he’s not so bad? But slowly he reveals who he really is and the darkness in him. But though it all Shalia never loses her sense of self, and she gathers a support system of family and friends.Speaking of family, one of the strongest parts of this story are the strength of the bonds of family and home, despite difficult circumstances and even being on the opposite sides of an issue from someone. Shalia loves her family, even as she marries a controversial person from a different country to find peace. And she and several other characters are torn between loyalty to family members and what they believe in or are called on to do in this book. Although many characters make harsh choices in this story, it is very clear those who’s heart is true and those who are just seeking to control and subdue. The difference between working towards peace and submission also stood out to me in this book. The romance in this story was difficult for me. The whole setup was hard to read and despite the fact that it’s not a feelings triangle at all, the situation is tricky and (spoiler> the brother thing always freaks me out a bit

Love Triangle Factor: This is tricky to categorize. None for feelings, but in action, it can be tough.
Cliffhanger Scale: Low
Posted by Lauren @ Love is not a triangle at 12:00 AM