Amber and Dusk by Lyra Selene 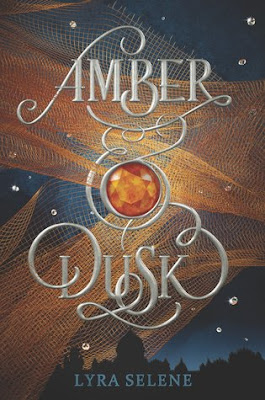 Book Description: Sylvie has always known she deserves more. Out in the permanent twilight of the Dusklands, her guardians called her power to create illusions a curse. But Sylvie knows it gives her a place in Coeur d'Or, the palais of the Amber Empress and her highborn legacies.

So Sylvie sets off toward the Amber City, a glittering jewel under a sun that never sets, to take what is hers.

But her hope for a better life is quickly dimmed. The empress invites her in only as part of a wicked wager among her powerful courtiers. Sylvie must assume a new name, Mirage, and begin to navigate secretive social circles and deadly games of intrigue in order to claim her spot. Soon it becomes apparent that nothing is as it appears and no one, including her cruel yet captivating sponsor, Sunder, will answer her questions. As Mirage strives to assume what should be her rightful place, she'll have to consider whether it is worth the price she must pay.
_____________________________________________________________________

I came out of Amber & Dusk with some mixed feelings. I liked some aspects a lot, and did not care for others. However, this book kept me interested and reading until the end, and for that, it was a win. Also, barring certain factors, I will definitely read the sequel.

My main issue was connecting to the heroine. For me to enjoy pretty much any book, I need to be able to connect to an MC, and Sylvie/Mirage was tough for me. Unfortunately, she just read as whiny and entitled, and for most of the book had a Marie Antoinette complex - ‘I am a legacy so I deserve better. I don’t care what is happening in the real world.’ I mean I get her deep desire to belong, but the way she approached it, didn’t sit well with me. Eventually Mirage wakes up and (spoiler: then is all of a sudden planning a revolution /end spoiler). I just didn’t buy the transition well, and really struggled to understand her character as a whole.
I found Sunder to be the most interesting character. I liked his moral greyness and actually, Mirage became a lot more interesting to me at the end when she acquired a little bit of that. But I really enjoyed Sunder and he for sure kept me reading. Figuring out who he was ended up being one of my favorite parts of the story. I also enjoyed Thibo and Lullaby, tho with such a big court, this story doesn’t have a big cast, and I wanted even more from them. I liked the direction of the romance a lot, and I am hoping that it continues along those lines in future books. There is a second possible direction that peters out into friendship and I’m hoping it stays that way (if it doesn’t, I won’t be reading more of this series. I’ve not got time for that). But I never trust expectations for sequels, so we shall see. Besides not connecting to the MC my biggest issue with this book was the world-building. I never quite grasped the - the sun hasn’t gone down for many years thing. At least why it mattered to the story, besides just being part of the world. I hope that’s explored more in the future. But overall I liked this debut, and barring any potential love triangles, I’d definitely read the next installment.

Love Triangle Factor: I'm going to say none (or low) - but there is a progression, so be aware of that.
Cliffhanger Scale: Low - There are unanswered questions and another book - Diamond & Dawn - to come. I think this is a duet, but I'm not certain.