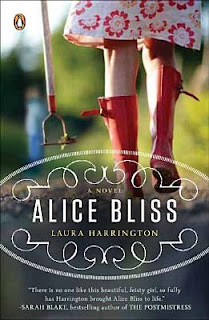 I have a confession to make. My daily life is not all that affected by the current wars in Afghanistan and Iraq. I don't know anyone personally who is fighting. If something big happens the news reports about it, but I don't think a lot about what is going on in the Middle East. Or what happens to the families that the soldiers leave behind. Alice Bliss is about those families. It's a book that made me start paying attention.

Matt Bliss joined the army reserves years ago because he believes in serving his country, and as an example to his wife Angie and daughters Alice and Ellie. But with the war in Iraq dragging on, men in the reserves are being called to fight. Alice Bliss is 15 and starting her sophomore year of high school when her father gets word that he is being deployed to Iraq. Not only does she have to deal with the concerns of a normal high schooler - first crushes, friends who decide they could do better elsewhere, and a mother who doesn't get her - she is facing the absence of a father she idolizes and tremendous responsibility at home.

Alice Bliss is the story of how the war affects one fifteen year old girl, in one family, in one small town in America. It is about how life keeps going despite the absence of a family member. And how easily childhood innocence is lost.
Everyone knows that Alice's dad is a good person - great even. If anyone can make it back from Iraq, Matt Bliss can. And so they hope. Everyone needs hope. I found myself hoping along with Alice and her family.

But is that true? Does war discriminate based on what kind of person you are? And if you make it back, will you be the same as you were before? I thought a lot about these questions while reading Alice Bliss. I also sobbed through portions of this story (ugly tears, guys). Although the book is set in 2006 during the current war, much of it felt timeless. I could imagine generations of people hoping for the safe return of their loved ones, and realizing that sometimes they don't come back the same way that they left.

Laura Harrington is a playwright and Alice Bliss has a lovely, cinematic quality to it, which speaks to that. It is written in third-person present tense, and though the book focuses mostly on Alice's perspective, the point of view rotates between characters. As a reader I felt as if I was watching the story unfold, getting to know characters as they were introduced and visualizing the scene around me.

The reader gets small details about every single character who is introduced, and I felt like I knew Alice's friends and neighbors in her small town of Belknap, New York (near Rochester). Although it took me a bit of time to get used to the writing style, the way Alice Bliss was written became one of my favorite parts of the novel. I think the story was much more complex because of it. The rotating perspective allowed me to understand for instance, the mindset of Alice's mother and how her father feels about his impending departure (instead of everything filtering from Alice to the reader). Also indicative of a playwright, Ms. Harrington employs a lot of dialogue, which was fun to read, and helped to keep up the pacing of the story.

Alice Bliss was published as adult fiction, but it is a book that I would recommend to teens as well.  In fact, it was nominated for the 2012 Alex Award, which honors books published for adults that have special appeal for young adults. I even picked the more YA friendly cover for this post, because of that fact.

Love Triangle Factor: N/A - There is a sweet romance with some complications, but I don't want to rate it, because it should not affect whether you read this story or not. (I hope you do choose to read this!)
Rating: 4 stars

Read about my book group's discussion of Alice Bliss with Laura Harrington: HERE.