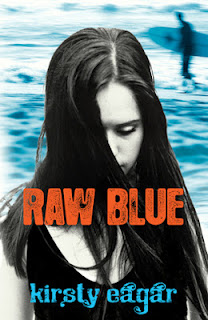 Carly has dropped out of uni to spend her days surfing and her nights working as a cook in a Manly café. Surfing is the one thing she loves doing … and the only thing that helps her stop thinking about what happened two years ago at schoolies week.And then Carly meets Ryan, a local at the break, fresh out of jail. When Ryan learns the truth, Carly has to decide. Will she let the past bury her? Or can she let go of her anger and shame, and find the courage to be happy?

Raw Blue is a quiet, internal book about a very serious subject matter: what happens to someone after they've been raped. It is about not letting your past keep a hold over you. It is about learning to trust again. It is also about surfing.


Rape is the perfect crime because the victim is the guilty one. I did not fight back; I did not say 'no'; I did not make a sound.*

Because of what happened to her two years ago, Carly has cut herself off from the world. When we meet her, she is living alone, working as a "sort of chef" at a restaurant. She has no friends, just people with whom she interacts, and most of them she can barely tolerate. The only thing that makes Carly happy is surfing. It's her connection point and brings her to life. It is also Carly's obsession, and the one thing she loves.

As much as surfing is to her, Carly still craves connection with those around her. But she doesn't know how to find it. Carly also does not know how to read people any more, especially guys. She figures if they show any interest in her, than they must want something. And she fears that if she opens herself up to people, they will discover that she is damaged.


Shame isn't a quiet grey cloud, shame is a drowning man who claws his way on top of you, scratching and tearing your skin, pushing you under the surface.

Through the course of the novel, Carly interacts with three people that help her begin to open up again. The first is her Dutch neighbor Hannah who is friendly but non-threatening. She has her own problems, lives her life, and is a constant presence in Carly's. But she does not ask too many questions, and Carly slowly begins to feel safe around Hannah.

The second is a boy that Carly meets while surfing. Danny has synesthesia, a condition that makes him see people and words in colors. Despite the fact that Danny is different and is sometimes treated as such, Carly sees that that he is open and unafraid. She wants that too.

Carly also meets Ryan while surfing. When she first sees him, she thinks he's interesting - the way he watches the surf and seems confident and self-assured. But she no longer knows how to read guys and he intimidates her. Her first interactions with him are awkward - but endearing, because they seemed real. In many ways Ryan is a regular, low-key guy, but he also has a dark past. His history has shaped him in a way that makes him a good fit for Carly. Through him she begins to realize what it means to have a normal relationship with a guy.


I am not what happened to me.

Raw Blue is Carly's journey. Despite the people who are there to support her, Carly is the one that has to recognize what she needs and do the work to get herself to a better, happier place internally.  I liked that the book does not try to fix all the characters in the story, but focuses its energy on Carly. Her trip to get there is not easy. But it felt true for her.

However, I did want a little bit more at the end of the story. The latter part of the book is very introverted, and I wish that there had been more of Carly coming out of that.

Raw Blue takes place in Australia and the setting gives the story it's own cadence, both in the flow of the characters' speech and in their very Australian words and phrases. I really enjoyed how that, and the surfing language and culture added to the atmosphere of the book. I don't think it would have been the same story without both of these elements.

*This quote expresses Carly's thoughts and feelings at one point in the novel. It is not a statement of truth about rape. If you've been raped, it is NEVER your fault.