In anticipation of some fabulous sequels releasing this fall, I wanted to do a series of posts on the first books in series that I read over the past year. 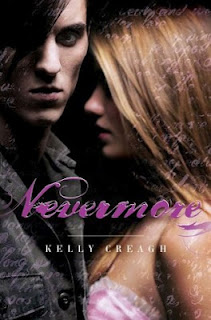 Cheerleader Isobel Lanley is horrified when she is paired with Varen Nethers for an English project, which is due—so unfair—on the day of the rival game. Cold and aloof, sardonic and sharp-tongued, Varen makes it clear he’d rather not have anything to do with her either. But when Isobel discovers strange writing in his journal, she can’t help but give this enigmatic boy with the piercing eyes another look. Soon, Isobel finds herself making excuses to be with Varen. Steadily pulled away from her friends and her possessive boyfriend, Isobel ventures deeper and deeper into the dream world Varen has created through the pages of his notebook, a realm where the terrifying stories of Edgar Allan Poe come to life. As her world begins to unravel around her, Isobel discovers that dreams, like words, hold more power than she ever imagined, and that the most frightening realities are those of the mind. Now she must find a way to reach Varen before he is consumed by the shadows of his own nightmares.His life depends on it.

First: A Confession. I don't know much about Edgar Allen Poe. Or at least I didn't before I started this book. Sure I read a few of his stories in high school, and I knew some basic information about him. But I am not a Poe enthusiast in any form. I think that definitely affected my reading of Nevermore, because I didn't understand some of the direction of the story, or why certain things were happening.

However, I also felt like I had permission not to know a lot about Poe. Because the MC of the story Isobel, knows about as much as I did (or perhaps less), when the story begins. I LOVE this about Nevermore. Even better, when Isobel starts hanging out with Varen who is obsessed with Poe, he keeps trying to get her to read Poe's works. And she is honestly not that interested. I love that.

Even still, I think I personally would have "gotten" the plot more if I'd understood Poe better. Therefore, for the uniformed, I'm going to post a brief statement about Poe - in regards to his understanding of the dreamworld - that my poet friend Ed sent me after I finished this book. Ed has not read Nevermore. The information is about Edgar Allen Poe and NOT about this novel. It should also not be new to those of you who know Poe. BUT if you want to go into the story knowing as much as Isobel (and me), don't read it:

Edward: I haven't read the book... but for Poe, the dreamworld was a metaphor for imagination, that is to say, he used different levels of consciousness and awareness to illustrate how easy the steps to imagination, fear, suspense and ultimately, for Poe, surrealism.

Seriously, after I read that, the lights came on and everything clicked into place (for me).

Onto the Proper Review. I'm going to tackle this in numbered points.

What I liked:
1. Isobel is a blonde, pink loving cheerleader and that doesn't change throughout the course of the book. I really appreciated that the author went with this stereotype but made Isobel a good, likable person, without making fun of who she is.
2. Isobel has a good/normal teen relationship with her parents. This is shockingly rare in YA fiction.
3. There are reason why Varen comes across as a tortured goth boy. As we get to know him better, his behavior and who he is begins to make a lot of sense. I understood Varen and could sympathize with him. He is also NOT your typical YA hero, which is refreshing.

4. In general the characters were all complex and unexpected. Although some seemed stereotypical at first, they all broke the mold in some way, which made them feel real. Characterization - for Isobel, Varen and the side characters - is one of my favorite things about this book. Also, I really liked Isobel's friend Gwen.

5.  I like that Isobel stands up for Varen and the way their relationship develops through shared experiences. (DISLIKE:) However, I didn't understand why she had to be so secretive to everyone about meeting him for a school assigned project. That was a little far-fetched in my opinion. I get that she needed to dump her boyfriend, but I'm not sure why she couldn't have been honest with her best friend. I thought Isobel ended up alienating more people than was necessary.


6. As I mentioned, I liked that Isobel didn't know a lot about Poe, because neither did I.

7. I really liked the ways that this story connected to Edgar Allen Poe's life and writings. I especially enjoyed learning about the strange circumstances and conspiracy theories surrounding his death.

1. I still have tons of questions about the dreamworld. I wish the author had explained Edgar Allen Poe's obsession with it a bit more.

2. Who is Reynolds ad how does he connect with Poe?

3. Honestly, I had a few "what is going on?" moments. But we've already established that I think I would have been far less confused if I had been more familiar with Poe. However, I don't think that everyone will feel the same, even if you don't know Poe.

1. I wish we could have seen more between Varen and Isobel. They had a lot of strained and strange interactions (the former because they were two very different people getting to know each other, the latter because of outside forces, ), and I would have liked to have seen them work past the "strained" phase a bit more. Also, I liked the way they built a connection - slowly at first through shared experiences and standing up for each other, but I thought there was a bit of a jump near the end in the seriousness of their relationship.


2. This is more curiosity, but I wanted to know more about the Grim Facade and tagging. It was a really cool event, and I wish it had been fleshed out better.

The end of Nevermore left me eager to get my hands on Enshadowed and find out what happens next. Thankfully book two released this week.