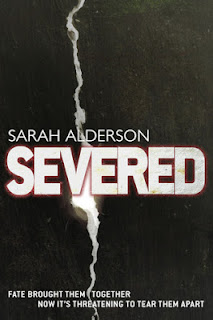 Fate brought them together.Now it’s threatening to tear them apart.As the last in a long line of demon slayers, Evie’s destiny is to end the war that has raged for centuries between humans and demons.Lucas, the half-Shadow Warrior half-human who was sent to kill her, has betrayed his own Brotherhood and his family to fight alongside her.With an army of unhumans on their tail, Evie and Lucas are forced into an uneasy alliance with a group of rogue Hunters who offer protection and the promise of answers.As the past is untangled and the dark history of the Hunters revealed, Evie discovers that severing the realms is going to require a lot more than just fighting. It’s going to require a sacrifice – one that only she can make.…More than realms will be severed. (From Goodreads)

Quick recap of Fated
In Fated we are introduced to Evie Tremain, who suddenly learns that she is the last in a line of demon Hunters. Unfortunately she finds this out after a group of them try to kill her, including Lucas Gray who is a half-human Shadow Warrior. Not only does Evie discover a heritage she knew nothing about, she finds out that there is an important prophecy surrounding her. While the Hunters will do anything to make sure she fulfills her purpose, the demons will do everything they can to stop her.

When Lucas is sent back to spy on Evie and eventually kill her, things don't go as planned - for either of them. At the end of Fated, Evie and Lucas have escaped both the demons and Hunters, neither of which is happy that they are working together. Severed picks up right where the first book ends, beginning with Evie and Lucas on the run.

On Severed
In Severed Sarah Alderson delivers another action-packed read that is fast-paced, romantic and surprising. The book takes place in L.A. and the grittiness of the city is a great backdrop for danger that Lucas and Evie feel crowding in on them.

An interesting Fate vs. Free Will debate comes into play in Severed as Evie tries to discover the rest of the prophecy surrounding her. Do you make your own destiny? Can you change what’s fated? Or will what is supposed to happen take place anyway, no matter what you do to try to stop it? There are no simple answers to these questions, and I was really intrigued by how they played out throughout this book. I'm also eager to find out how they are answered in the rest of the series.


Severed introduce several new characters, both demons and Hunters - Flic and Jamieson as well as Cyrus, Vera and Ash. Alderson has called Cyrus her favorite male character since Alex from Hunting Lila.  He is attractive, arrogant and good at what he does (you'll have to read the book to find out what that is). But he also has more depth to him than he shows on the surface. You don't want to miss him and the other new cast members.

As Evie, Lucas and the others travel through L.A. and the prophecy becomes clearer, we learn more about the seven demon realms and the demons themselves. However the demon mythology is still the part of the story that I am the least clear about. I realize that the two narrators of this story - Lucas and Evie - have only lived in the human realm, but I'd love some more details about the realms and how they operate. I hope we get more about them in the third book.

I really like the way that Alderson writes her stories, and especially her relationships. She does not give excessive information, or endless descriptions. But that makes the information we do get feel more important somehow. Severed is a great example of the fact that you don’t have to be graphic to be steamy. There is a burning intensity underlying Evie and Lucas’ relationship that I really loved. It is tentative in many ways because they are still very much getting to know each other. But it is also solid. One of my favorite aspects of Alderson's romances is the fact that they are built on mutual respect. Evie and Lucas are protective of each other. They will both do anything to keep the other safe, and that causes some problems for them. Especially, when 'protection' means hiding plans from each other. Although I understood their decisions, it still frustrated me.

Severed is exactly how I felt when I finished this book. That end. WOW. I’m just glad that the third book in the series Shadowed comes out early 2013. And I’m going to remain hopeful about it. Below is a twitter conversation between me and Sarah Alderson, where she promises good things to come. 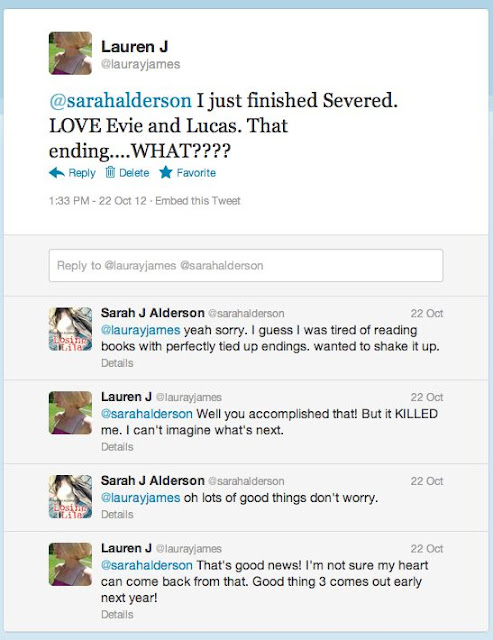 Read an EXCERPT from chapter 1 of Severed

‘Whatever you do,’ Lucas said, shooting Evie a warning glance as he buzzed entry and then led her inside and towards a stairwell, ‘don’t tell them who you are – or what you are. They don’t need to know.’

Evie’s heart slammed to a standstill. She stared at Lucas, dazed. She had no intention of declaring to a total stranger that she was a half-trained Hunter with zero powers and a debilitating inability to actually slay any demons. And she had even less intention of announcing herself messiah-like as the White Light come to sever the realms. But who the hell were they?

She wished now that she’d asked him about his plan back when they were leaving Riverview. But they’d been in kind of a hurry.

Lucas was now leading her down a dingily lit corridor that smelt of cigarettes and burger grease. He stopped in front of a door with flaking paint.

‘Evie? Are you alright?’

She blinked, realising that she had come to a standstill in the middle of the corridor, her stomach in knots. She walked slightly unsteadily over to Lucas who was staring at her, his grey eyes dark and troubled. Stress was etched across his face, which was still so pale it made her stomach wrench, remembering.

‘Are you alright?’ he asked again, more softly.

She nodded in response. But it was a lie and he knew it.

Severed is available for purchase from Amazon today.