After Monday's post about failing to connect with a book, I figured I would post a review from another book I read last year that I felt unsettled about, but for a very different reason than Seraphina. Although I found the concept to be fascinating, the characters in Sweet Evil made me extremely uncomfortable. This time, I don't think my opinion would change on a re-read. Even so, I'm fascinated enough that I will probably read book 2. 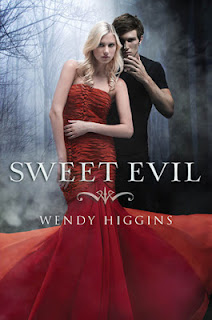 Embrace the ForbiddenWhat if there were teens whose lives literally depended on being bad influences?This is the reality for sons and daughters of fallen angels.Tenderhearted Southern girl Anna Whitt was born with the sixth sense to see and feel emotions of other people. She's aware of a struggle within herself, an inexplicable pull toward danger, but Anna, the ultimate good girl, has always had the advantage of her angel side to balance the darkness within. It isn't until she turns sixteen and meets the alluring Kaidan Rowe that she discovers her terrifying heritage and her willpower is put to the test. He's the boy your daddy warned you about. If only someone had warned Anna.Forced to face her destiny, will Anna embrace her halo or her horns? (From Goodreads)

Sweet Evil is one of several angel/demon books that I read last year. Although it wasn't my favorite, the book definitely stood out because of how many emotions it brought out of me. I'm still thinking about it even now almost a year after I read it. Sweet Evil fascinated me, made me nervous and uncomfortable, want to cry, and yes, I swooned a bit too (much to my dismay). The concept of the children of demons being groomed to follow in their fathers’ “work,” and then sent out into the world to negatively influence others is very intriguing. I appreciated the lengths that the author went through to tell her story, which made it both more authentic and also a difficult concept to digest. There is a lot of ugly in the world done by and to people, and this author doesn’t shy away from describing it in her story. The way the world works in Sweet Evil actually reminded me a bit of The Screwtape Letters by C.S. Lewis, which is all about an older demon showing a younger one how to influence humans subtly. That is exactly what the demons in this book are taught, find a susceptible person and exploit their weakness. Or quietly create one in them. In order to portray this behavior, the characters in Sweet Evil were put in some very difficult situations, some of which made me feel very uncomfortable. But they also made me think a lot about how I would react if I were one of them, and about good and evil and human nature in general.

Anna is the narrator for the story, and the start of the book she is very sheltered and naive about the world. The very definition of a 'good girl.'  I enjoyed watching her discover who she was and begin to stand up for herself and her beliefs. I actually connected to Anna a bit in the beginning of the book, because I was similar in high school. I could especially relate to her feelings about some of the things that she experiences. She struggles a lot in this story with who she is, and what kind of person she's supposed to be - and wants to become. However, I know that many people had trouble with Anna's sheltered nature. Not everyone identifies with this type of character. Also, the further I got into the story, the less I connected to her, and the more uncomfortable her behavior made me.

I think what was hardest for me to handle where Anna is concerned, is her relationship with Kaiden (Ky-den). Kaiden is the son of a demon, and has been raised all of his life to do the work of his father - and his particular specialty is lust. It is not an exaggeration to say that Kai's behavior/work is somewhere between a male prostitute and a sexual predator. I get what the author was trying to do with this book, and the boundaries she pushed with the character’s actions, but it was really hard for me to read about his growing 'relationship' with Anna, especially in terms of how much she fell for him, all the while he was 'working.'

I wish there had been more of something to make me less uncomfortable with how much Anna loved/trusted Kaiden. Anna keeps telling the reader that they care about each other, but I didn’t really believe it from him. It would have been helpful to hear from Kaiden's POV, because I wasn’t as confident as Anna was on his feelings for her.* Although there are some things that happen that do give an insight into how he feels about her, most of his behavior doesn’t change enough for me to root for him (for her) at this point. Let me spell out what I mean by this: Kaiden is continuing his "work" for his father, all throughout this book, and he is very good at getting people to fall for him. So it was hard for me to distinguish that behavior from how he was acting towards Anna. I know many people love the ultimate bad boy, but Kai took it a bit too far for comfort level.

For his credit, Kai does warn Anna about who he is, and she ignores it. She definitely comes across as suffering from a bad case of wanting to save the bad boy from himself. This is where she began to get on my nerves. Kaiden is the epitome of a bad boy, and it is clear that he enjoys what he does and that he's good at. Even so, there is definitely something sad and tragic about his life, which he has little control over. There were also moments where I could see him begin to want something else. Still, I didn’t see enough redeemable about him in this story to root for him for Anna, and I honestly cringed during most of the swoon scenes. However, I see a lot of potential in Kai. Also, I know that my issues with him will not bother everyone. You might end this book completely pro-Kaiden.

Although they made me think the most, Anna and Kaiden are not the only people we meet in Sweet Evil. The story is filled with a lot of other intriguing characters. I especially liked Kopano, and I hope we get more from Anna's dad. For the most part, the plot worked for me, in the scheme of the world Wendy Higgins created. However there were a few choices made by characters that seemed to happen because the author wanted to force the story in a certain direction, and not because it was natural for them. This made the storyline feel forced and unnatural in places.

If I could sum up this book for me I would use the word uncomfortable. Even so, I want to find out what happens next, so I'll most likely read Sweet Peril when it comes out next month.

NOTE: Sweet Evil is screaming for a good discussion. However, they are heavy topics so I would personally recommend it for an older/mature YA audience.

Love Triangle Factor: From Anna's POV: Mild. From Kaiden's: ???? It's complicated.
Cliffhanger Scale: Low-Medium (this one really depends on your perspective)

*Since the book was published, the author has posted at least two Kaiden POV scenes from Sweet Evil. They have given a glimpse of insight into him and that has helped me understand his feelings for Anna better.