NOTE: The Madness Underneath is the second book in a series, my thoughts contain spoilers for The Name of the Star. 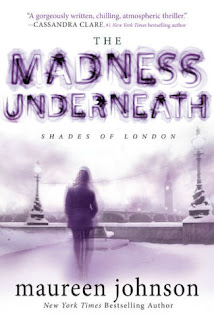 After her near-fatal run-in with the Jack the Ripper copycat, Rory Devereaux has been living in Bristol under the close watch of her parents. So when her therapist suddenly suggests she return to Wexford, Rory jumps at the chance. But Rory's brush with the Ripper touched her more than she thought possible: she's become a human terminus, with the power to eliminate ghosts on contact. She soon finds out that the Shades—the city's secret ghost-fighting police—are responsible for her return. The Ripper may be gone, but now there is a string of new inexplicable deaths threatening London. Rory has evidence that the deaths are no coincidence. Something much more sinister is going on, and now she must convince the squad to listen to her before it's too late.In this follow-up to the Edgar Award-nominated The Name of the Star, Maureen Johnson adds another layer of spectacularly gruesome details to the streets of London that will keep you on the edge of your seat until the very end. (From Goodreads)

You have successfully crushed my hopes for this series. Please tell me that the ending of The Madness Underneath was a joke, and Rory is about to jump out of the bushes and yell "gotcha!"

Of course, I'm sure you're giggling gleefully at my distress. But for the sake of my sanity, I am requesting that you fix it. Please?


When The Madness Underneath begins, Rory is in Bristol at her parents house where she was exiled after The Ripper attacked her at her London school. She is watched constantly by her parents and sees a therapist regularly, but none of that is helping her. This is mostly because Rory is forbidden from telling anyone what really happened to her in the bathroom that night or about her ghost-seeing abilities. Not like they would believe her anyway. Thankfully, it is not long before Rory is sent back to Wexford, where everyone hopes she will be able to regain her normal life. Rory is eager to return, although she's not sure if 'normal' is even possible for her anymore.

You have to appreciate Rory's wit and chatty inner dialogue to enjoy this book. It is not a fast paced thriller, but more an introspective story about Rory recovering from The Ripper attack - physically, but mostly psychological, and coming to terms with her new ability as someone who can see ghosts. She feels out of place at school and directionally lost, which is a very realistic problem for Rory to be facing, especially because she cannot tell any of her school friends about what happened to her that night. On top of that, she's trying to figure out what it means that she is a walking terminus.

Rory uses her tangential stories to distract her friends and therapists from figuring out how much she is struggling. And I'm pretty sure the author was using them to distract the reader from the fact that not a lot happens in this book, as well as the fact that what does happen doesn't make a whole lot of sense. As much as I love hearing all about Rory's kooky southern family, I honestly got bored of her tales after a while.

Despite that, there are a few great creepy London moments in The Madness Underneath, as well as an awesome title that matches those sections. But I wanted a lot more of those parts than we got. Unfortunately, there is also a major storyline in this book that I did not buy at all. In fact, I cringed when it was introduced, because it seemed so transparently ridiculous to me, and I couldn't figure out how Rory was falling for it. Especially, because she is so insightful in the rest of the book. The unfortunate plot-line was left largely unfinished, so I still do not have a great sense about where it is headed. Although, I don't have a whole lot of confidence about where it is going either.

Thankfully, all of our beloved characters are back, although some more prominently than others. The Shades - Stephen, Callum and Boo, are my favorite secondary characters and I was so glad to see them again. We especially get more Stephen, who is by far my favorite!! Rory also begins to examine her relationship with Jerome (finally!). Honestly, I've always found him to be flat and uninteresting. I think he's a fairly realistic teen boy, with exceptional hair. But with Rory's new ghost abilities, it's hard to fit him into her life. I have personally never been one to spend time on relationships that aren't going anywhere, so going into this book I was hoping that Rory would either drop Jerome, or he would be able to be a part of her real life in a way that would make him more of a contributor. Thankfully, one of those two scenarios does happen. I am glad about progress on that front.

The Madness Underneath is a transition book, and that did not bug me in and of itself, especially because I was aware of that fact before I started reading (from seeing other reviews). I also did not mind where Rory ends up at the conclusion of the story, although I'm not so sure about everything else. What most frustrates me is how Rory got to where she is at the end, especially because so little happens besides a plot-line that I didn't buy. Even so, the ending pretty much crushed my dreams for this series, and annoyed me because it is taking the story in a direction that I'm not thrilled about. But I'm not giving up on The Shades of London yet, and I'm holding out hope that Ms. Johnson is going to surprise and amaze me in the third installment of this series.

Cliffhanger Scale: Medium - Because of how many unfinished questions/plot-lines there are.
Love Triangle Factor: Mild