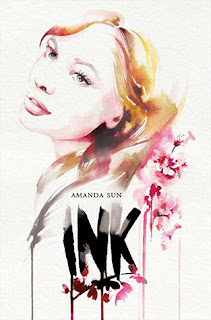 On the heels of a family tragedy, the last thing Katie Greene wants to do is move halfway across the world. Stuck with her aunt in Shizuoka, Japan, Katie feels lost. Alone. She doesn’t know the language, she can barely hold a pair of chopsticks, and she can’t seem to get the hang of taking her shoes off whenever she enters a building.Then there’s gorgeous but aloof Tomohiro, star of the school’s kendo team. How did he really get the scar on his arm? Katie isn’t prepared for the answer. But when she sees the things he draws start moving, there’s no denying the truth: Tomo has a connection to the ancient gods of Japan, and being near Katie is causing his abilities to spiral out of control. If the wrong people notice, they'll both be targets.Katie never wanted to move to Japan—now she may not make it out of the country alive. (From Goodreads)

Ink wasn't on my radar at all until I attended the Harlequin Teen breakfast during BEA. Instead of a panel discussion, the breakfast was set up as a round-robin. There was an empty spot at each of the tables where the authors rotated through one at a time. Amanda Sun was the first author to visit our table, and everything she said made me want to read and love her debut novel. She talked about her book's art themes that are based on Japan's rich artistic traditions. She discussed living in Japan in high school, visiting to do research and wanting her book to be as authentic as possible. All elements that are important to me when reading a book that takes place in a different country. She also purposefully chose to begin her story after its protagonist Katie has been in Japan for a few weeks, because she didn't want the story to be all about Katie's transition from America to her new Japanese school. 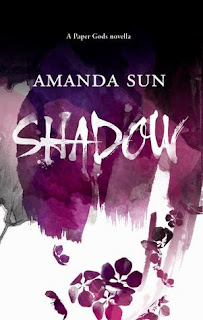 The other tidbit of information that Ms. Sun imparted, which made my experience reading Ink better, was that she's written an ebook prequel to her novel. Shadow is FREE and available now. It tells the back story of Katie's journey to Japan, from her mother's funeral to her first day of school. Though this wasn't necessary to get to know Katie, I valued the greater connection I gained with her and her grief.

However, what's best about Shadow is that Katie's perspective is alternated with Tomohiro's viewpoint. Because Ink is written entirely from Katie's POV, the novella provides valuable information about the boy whose drawings take on a life of their own  - the nature of his nightmares, what happened in his relationship with his ex-girlfriend and why he believes he's connected to Katie. Although it is not essential to understanding Ink, the story helped me know both characters better. And because I'd been inside of Tomo's head, I never saw him as a mysterious bad boy, but instead as a guy who's lost and tortured and dealing with a scary ability spiraling out of his control. I hope we get more of this series written from Tomo's viewpoint.
_______________________________________________________________________

Ink combines Japan's rich traditions of paper arts and animation with Japanese mythology and history to create an enchanting story that is magical, thrilling and romantic.

Ink is about a boy whose drawings come to life and the girl who discovers his secret. It's realizing that tragedy changes you and not being afraid to live your life even when it looks different than before. It's finding a home and friends in unexpected places. It's danger and betrayal, being part of something bigger than yourself and finding your own path in life even when it scares you.

I love books that take place in different countries in the world, especially when it is clear that the author knows the place she's depicting. Amanda Sun brought Japan to life for me in Ink. Both the daily lives of students - their school slippers, infrared phones and confessions - to their recreational activities, catch phrases and spiritual beliefs. I ate up every single bit of the Japanese culture in this story. I could picture it all as Ms. Sun drew it with her words and now I want to visit even more. Although the book is in English (thankfully), the characters' conversations even felt like they'd been written in Japanese first and then translated to English for the book. What I mean, is that the cadence read differently to me when Katie spoke in Japanese versus English, making the story feel more authentic. There are also a lot of Japanese words and phrases interspersed throughout, giving the book even more of an authentic flair. If you're worried, there is a glossary at the end, but I didn't use it.

Where Ink is weakest is in the beginning. Even knowing Katie and Tomohiro's backstory in the prequel, Katie latches onto Tomo a little too quickly. While I believe in instant attraction, the immediately high level of Katie's interest in Tomo and desire to figure him out, seemed overly sudden. However, I actually like how their romance develops throughout this story as a whole. If you have trouble with the start of their story, I urge you to keep reading. The second half is much stronger. I was personally so invested in reading about daily life in Japan in the beginning, and the thrilling evolution of Tomo's talent throughout the rest of the story that the slow start did not throw off my experience with the book.

I am sad to see so many mixed reviews of Ink, and I hope that you'll give it a chance. By the end of the novel, I was completely captivated by a world where ink flows like blood and drawings come to life in beautiful and frightening ways. I am eager to find out the next part of Katie and Tomohiro's story.

Love Triangle Factor: MILD: There is the hint that one could be coming at one point in the story, but it never goes in that direction. I don't foresee this other person being a romantic threat in the future.
Cliffhanger Scale: LOW: The first chapter of book 2 was in the back of my ARC and it made me excited to continue the story, but I felt good about where this one ended.