NOTE: Darkness Falls is the second book in a series. Because I read the Immortal Beloved series back to back as one long story and want to keep my reviews spoiler free, I'm not going to do a great deal of recap. Check my review of Immortal Beloved for my thoughts on book 1 and the start of Nastasya's journey. 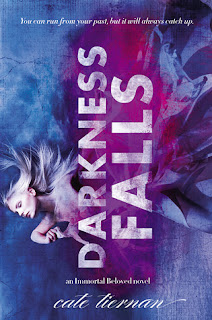 You can run from your past, but it will always catch up.
Nastasya has lived for hundreds of years, but for some reason it never seems to get any easier. She’s left behind her days of debauchery to find peace and forgiveness at River’s Edge, a safe haven for wayward immortals. There she’s uncovered her family’s epic history, reclaimed her magickal powers, and met Reyn, whom she dubs “the Viking god.” Just as she settles into her new life, Nastasya learns that her old friends might be in town....
Reuniting with her gorgeous and dangerous ex-best-friend, Innocencio, Nas wonders if she’ll ever be truly free of her dark legacy. Is Incy dangerous, power-hungry, and wicked? Or is he the only one who truly understands Nas’s darkness? Either way, Nas is desperate to find out who she really is-even if the answer kills her. (From Goodreads)

Nastasya Crowe is a 459 year old residing in a 17 year old body, living at River's Edge - a safe haven/rehab facility for immortals. In Immortal Beloved Nastasya painfully confronted her family's history and how that has shaped her long life. In Darkness Falls she continues facing her past, especially the last 100 years of it. The person she's become over that time is not pretty and her road to personal healing and growth is painful at times.

True to its name, Darkness Falls is much darker than the first book. This installment is a necessary part of Nas' journey, but I didn’t feel like I was as inside of Nastasya’s emotions as I was while reading Immortal Beloved. This time I felt like I was watching her from the outside, like a parent realizes their child needs to struggle and work through something on their own, though it is painful to do so. BUT I don't think that Nastasya could make it to where she is at the end of the series without this part of her journey. Because of that, I am thankful for it.

In Darkness Falls Nastasya begins to examine what it means to be a friend and care about others – and have others who care about her. She has been self-absorbed for most of her life, surrounded by equally self-absorbed people, and because of that her perspective is very warped. Nastasya also starts to understand one her biggest fears, and immortal burdens: loss. She is afraid of loving because it inevitably means loss. All mortal beings die one day, and even immortals can be killed, a sobering fact that Nas knows very well. Both of these issues are a slow work in progress for Nas and continue throughout the series. But they are also realistic and relatable. Even regular mortals must come to terms with them.

Beyond Nastasya's own personal development, the larger paranormal, fantasy plot line picks up the pace in this book as well. Darkness is seeping into the immortal world, not just Nastasya's life, and it is going to have a big impact on River's Edge. But truly, what I love about this series, is that in many ways it's a character study of one person who is  trying to come to terms with herself and her immortality. I'll say it again, this series is not like all the other paranormal romances, and that is one of the things I loved most about it.

The Romance
Reyn and Nastasya continue their slow dance around each other in this book. They still have a lot to work out between them, and Nastasya is especially overwhelmed with her own issues. But I have hope for them.

The role of women throughout history as viewed by Nastasya
One of the most interesting, subtler aspects of this series, is the way that woman have been treated throughout history. Being a woman living since the mid 1500s, Nastasya’s gender has greatly affected her throughout her life. Women have not had a lot of power in society during most of history, and she has had to be married or pretend to be a widow to be recognized in society for the majority of her existence. Because of that, she is also adamant that she does not want to be reliant on anyone, especially a man. I really appreciated this realistic and fascinating detail to the story, plus I love all the girl power. Beyond the role of women, as a history girl, it is so much fun to get little peeks of the different time periods Nas has lived.

Boston?
My biggest complaint about Darkness Falls is that the city of Boston that it describes is a foreign place from the one I know. It was strange for Nastasya to talk about places and surrounding town names, because it just all sounded made up (which it was). I wish that the city came across a little more authentically to me. Thankfully, I could definitely imagine West Lowing, the location of River's Edge, existing.

Book titles
I wanted to comment briefly on the book titles in this series. In my opinion, Darkness Falls is the most accurate title description for the book's content. Both Immortal Beloved and Eternally Yours make this series sound like it is completely romance focused, when it's actually mostly about the development of Nastasya. Although there is an important slow-building romance in the plot, it is not the main focus of this series, unless you're talking about the fact that Nastasya must learn to love herself. Having read all three books in this series, I can guess somewhat about why these titles were chosen. But I know they've turned off a few people, because of how they immediately come across. I urge you not to pass this series by without taking a closer look at the content first!

Love Triangle Factor: None
Cliffhanger Scale: Mild – no great immediate danger, but clear that the overarching story is incomplete. This one goes out with more of a bang though.