NOTE: Emerald Green is the third book in a series. I've made every effort to make this review spoiler free for the first two books. See my Goodreads review of Ruby Red, HERE and my blog review of Sapphire Blue, HERE. 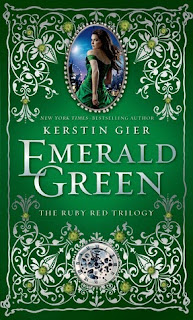 Gwen has a destiny to fulfill, but no one will tell her what it is.
She’s only recently learned that she is the Ruby, the final member of the time-traveling Circle of Twelve, and since then nothing has been going right. She suspects the founder of the Circle, Count Saint-German, is up to something nefarious, but nobody will believe her. And she’s just learned that her charming time-traveling partner, Gideon, has probably been using her all along.
This stunning conclusion picks up where Sapphire Blue left off, reaching new heights of intrigue and romance as Gwen finally uncovers the secrets of the time-traveling society and learns her fate. (From Goodreads)


**I know this book doesn't come out for a while, but now is the perfect time to start reading the series!**


Series set-up (spoiler free)
Gwendolyn Shepherd is just a normal teenage girl who goes to school in London and likes celebrities and movies more than historical facts or schoolwork. Gwen is thankful that it is her cousin Charlotte (and not herself) who carries the family's time travel gene, and has to spend time learning to dance, fence, walk and talk so that she'll be able to blend into various time periods. Except, Gwen is the one who actually starts time traveling. All of a sudden everyone realizes they've made a huge mistake, and Gwen is thrust into a world and a secret time travel society that she knows nothing about.

While attempting to learn – in a matter of days – everything that her cousin Charlotte spent years perfecting, Gwen discovers that two former time travelers have stolen a valuable time traveling device and escaped into the past with it. The Guardians (the secret time travel society) are desperate to get it back, and Gwen somehow ends up in the middle of the drama. Gwen must figure out whom she can trust and why the object was stolen in the first place.

Story
Emerald Green is the third book in a series and in it we get to see all the pieces of the story from Ruby Red and Sapphire Blue come together. I loved watching past and present collide as the plot finally comes full circle. Some of the ‘figuring out’ parts of this installment slowed down the flow a bit, but it was so much fun watching the characters work together to sort the clues they’ve amassed. This series is extremely well crafted, and clearly planned out from beginning to end. I’m always excited when this happens, especially in a book about time travel, with details happening in different time periods. I also absolutely loved all of the historical information we learned in each time period Gwen visited, especially about clothing and customs. A few of the plot elements I saw coming, especially ones that we’d already watched happen earlier (you’ll see what I mean when you read the book), but Emerald Green has some really great surprises in it. Two big revelations comes at the end of this story, one shocked me, and the other put a huge smile on my face.

Characters
An element that I’m always looking for in the books I read is a strong character voice, and Gwen definitely stands out to me. In many ways she is just a normal girl. She’s funny, easy going, tangential and sometimes even a little dramatic and emotional. But she also came across as a real teen to me. I found her to be extremely likable and easy to root for. She is also very good at using to her advantage the fact that people (i.e. the stuffy Guardians) are constantly underestimating her. Gwen says and thinks the most hilarious things, and it was truly delightful to be inside of her head for 3 books.  I did think that Gwen was a little weepier in this installment (some of it was totally founded!). BUT she remains one of my favorite heroines, for her spunk and silliness and also how regular but likable she is.

I also adored all of the supporting cast members of whom there are a lot, especially Aunt Maddy, Mr. Bernard, James, Raphael and Gwen’s mom and siblings. It was great to see them all working together in this book. One of my most favorites was Gwen’s best friend Lesley, who is both the brains and voice of reason behind the operation. But Lesley and Gwen together are also hilarious. Lesley is one of my favorite book best friends ever.

Of course we can’t forget the infuriating and swooworthy Gideon de Villers. Gideon is a few years older than Gwen and another time traveler. Gwen and he time travel a lot together, so thankfully for Gwen, he’s easy on the eyes. Unfortunately, Gwen is afraid she can’t trust him. Neither was I at times. I actually loved all the angst in the series over whether Gideon was trustworthy or not. It was a fun part of the plot, instead of stressful.

Romance
I don't want to say too much about this, except that I really like the way that the romance worked itself out throughout the series. It starts a little quickly and becomes a tad dramatic, but I thought its development made sense for the plot, and fit with the characters. Also, no love triangle!

Conclusion
The Ruby Red series is fast paced and so much fun! The books are quick reads with action that takes place in both the past and present and include gorgeous costumes, crazy hairstyles, ghosts, swords, secrets, romance, pop culture and lots of intrigue. If you’re interested in these books, now is the perfect time to start them. Ruby Red is one of those series that is one overarching, connecting storyline spread over three books. Although each book has its own climax and excitement, they read very well close together. Plus I have a feeling that you’ll pick up on a lot more details if you’re able experience them in quick succession.  I know it seems like Emerald Green comes out a long time from now, but I encourage you to get going on this series, or think about a re-read.

A note on the translation
Emerald Green has been translated from German by Anthea Bell. I’m amazed at anyone who can translate an entire book. But there are a few awkward words and phrases that seem to be the result of the language shift. There is also an over abundance of exclamation points! Both of these elements are present in the entire series, but not something that hugely affected my reading experience.

*A copy was provided by the publisher in exchange for an honest review. **THANK YOU, Macmillan!!**