Early Review: On the Fence by Kasie West

On the Fence
by Kasie West
Read: April 21, 2014
Published: July 1, 2014 by HarperTeen
Source: ALA, (Thank you, Bloomsbury!)
Category: YA, contemporary
Find: Goodreads | Amazon 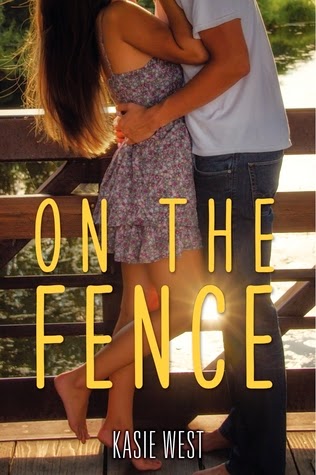 She's a tomboy. He's the boy next door…
Charlie Reynolds can outrun, outscore, and outwit every boy she knows. But when it comes to being a girl, Charlie doesn't know the first thing about anything. So when she starts working at a chichi boutique to pay off a speeding ticket, she finds herself in a strange new world. To cope with the stress of her new reality, Charlie takes to spending nights chatting with her neighbor Braden through the fence between their yards. As she grows to depend on their nightly Fence Chats, she realizes she's got a bigger problem than speeding tickets-she's falling for Braden. She knows what it means to go for the win, but if spilling her secret means losing him for good, the stakes just got too high.
Fun, original, and endearing, On the Fence is a romantic comedy about finding yourself and finding love where you least expect.

I was one of the very few people who didn’t love The Distance Between Us, which made me worry there was something wrong with me. But I was determined  to give Kasie West another try, in the hopes of discovering the magic of her stories. Thankfully, I did! I really enjoyed On The Fence. It was sweet and awkward and a great summer read.

1) Charlie – Charlie is clueless but endearing. She won me over with her love of sports and her brothers. How truly lost she was about girl things, and her longing for her mother, who died when she was six years old. I love that Charlie explores who she is in this book. Although that includes a make-over and trying new clothes and makeup, this isn’t a She’s All That Cinderella story. It’s about embracing who you are and being proud of that in all its forms. I also love that Charlie's love interest Braden didn't start noticing her because she changed her looks, in fact he was more worried that she was losing herself in all her trying to be more like a "girl."

2) Family – I adored Charlie’s family: her three protective older brothers who clearly love her deeply, and even her father who struggles to do his best with his only daughter. Charlie has a heartfelt chat with her dad at a point in this book, and it was such a beautiful/heartbreaking conversation. I hope Kasie West writes a story for one of these brothers, especially Gage.

3) Braden – Charlie’s neighbor and her brothers’ best friend, Braden has been a fixture in Charlie’s life for years. She considers him as one of her brothers…only he’s not. I loved the clear bond between him and Charlie, but also how obviously dense Charlie was about her feelings for him. Their fence chats were fun and a great way to open up to each other.  Their romance was sweet and clean too – and though Evan (a boy Charlie meets when she's dressed up like a "girl") was a bit of a nuisance, he also served to show both Charlie and Braden how much they meant to each other. I actually enjoyed the tension he brought into the book. Don’t worry, this isn’t really a love triangle. Charlie always wants Braden, even when she pretends she doesn't.

4) Easter Eggs – I didn’t realize this would take place in the same town as The Distance Between Us. It was fun to get glimpses of previous characters. I hope that happens again in the future.

5) I am now a Kasie West contemporary convert. On the Fence was adorable, and I liked how it played off of the Cinderella trope, but didn't become that at all. I can't wait for more of her books!