This One Summer Blog Tour + Giveaway

This One Summer blog tour schedule

Telling a story with pictures and words together is a beautiful and magic experience.

Today one of the authors of This One Summer, Mariko Tamaki, has stopped by
to give us insight into her story building process. 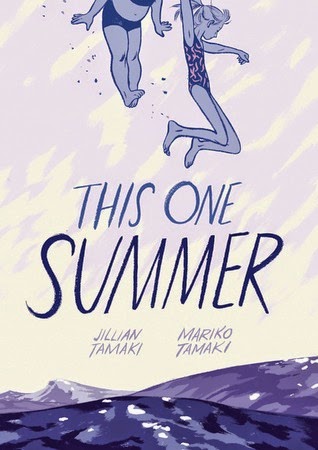 Goodreads summary: Every summer, Rose goes with her mom and dad to a lake house in Awago Beach. It's their getaway, their refuge. Rosie's friend Windy is always there, too, like the little sister she never had. But this summer is different. Rose's mom and dad won't stop fighting, and when Rose and Windy seek a distraction from the drama, they find themselves with a whole new set of problems. It's a summer of secrets and sorrow and growing up, and it's a good thing Rose and Windy have each other.In This One Summer two stellar creators redefine the teen graphic novel. Cousins Mariko and Jillian Tamaki, the team behind Skim, have collaborated on this gorgeous, heartbreaking, and ultimately hopeful story about a girl on the cusp of her teen age—a story of renewal and revelation.

BUILDING A STORY
by Mariko Tamaki

When people ask me how to “start” writing a story, which I assume to be a “big white blank page vs. me” type of question, I think about this file I have on my computer labeled “My art.”

It is an extremely diverse collection of works.  Some of these are in what I would like to call their “final drafts.”  The numbers on these things, from 12 to 25, should tell you how final final actually is when you are working on something as complicated as a novel, or even a short story for that matter.

Mixed in this pile of works that are in draft, which I leave in there even when they are published and not being worked on any more, are a slew of what I suppose you could call bits.

They are bits of stories.  They end in awkward moments, characters and sometimes even dialogue just dangling on the page like abandoned socks that didn’t make it to the wash.

Sometimes when I’m bored I’ll take some time and read through these pages.

The thing with these bits is, even though they are bits, unfinished and unpolished, they are important.  Because, if you scan through that “My Art” file, you will see that I wrote them in between writing the bigger things.

I wrote them in part to battle the blinding space of the white page.  Because to me, if you are not writing something, then you are just a hunk of nothing (that’s harsh but it’s a feeling only). I wrote them because in that space of not having a project I try to let whatever pops into my mind go to the page.

I wrote them, often, because, I thought they might be something longer and bigger.

I used to have this theory when I was younger that key to the writing process was to drive through that first page into a novel.  Like it was really just a matter of heft.

As a result, I spent of lot of time waist deep in a process I would compare to trying to weave a piece of material with a pile of gummy worms, with a loom made of chocolate.

Which actually sounds pretty good in terms of ingredients.

But is not so great for making a blanket.

I’ve saved this to the end because it’s the thing I’m still struggling with most of the time, so my answer is short.

It’s a kind of ease.  Bits that are stories propagate and I don’t have to fight to make that happen.  When it’s a fight I take a break.  If more bits don’t show up, I stop.  And sometimes it’s hard to let the gummy worm go, but ultimately I’m a happier person when I do.

Wednesday, May 7
The Book Rat

Thursday, May 8
Love is Not a Triangle

Friday, May 9
Consumed By Books

Saturday, May 10
YA Bibliophile

Sunday, May 11
Fly to Fiction

Monday, May 12
Diversity in YA

Finished copy of
This One Summer