The Shadow Cabinet by Maureen Johnson 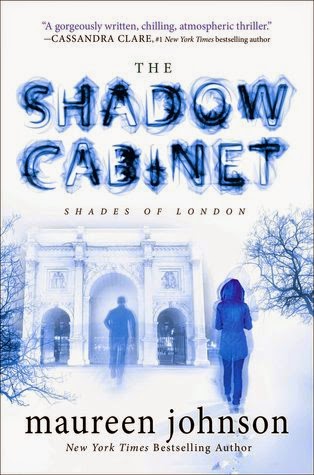 The thrilling third installment to the Edgar-nominated, bestselling series.
Rory and her friends are reeling from a series of sudden and tragic events. While racked with grief, Rory tries to determine if she acted in time to save a member of the squad. If she did, how do you find a ghost? Also, Rory’s classmate Charlotte has been kidnapped by Jane and her nefarious organization. Evidence is uncovered of a forty-year-old cult, ten missing teenagers, and a likely mass murder. Everything indicates that Charlotte’s in danger, and it seems that something much bigger and much more terrible is coming.
Time is running out as Rory fights to find her friends and the ghost squad struggles to stop Jane from unleashing her spectral nightmare on the entire city. In the process, they'll discover the existence of an organization that underpins London itself—and Rory will learn that someone she trusts has been keeping a tremendous secret.
___________________________________________________________________________

The Shadow Cabinet is book three in Maureen Johnson's Shades of London series, and I've been waiting for it ever since The Madness Underneath released two years ago. Book two ended on a humongous cliffhanger that shattered my hopes for this series pretty hard, and I was desperate for Johnson to fix it for me. I will say that overall, I was pleased with how this story developed. For me, it was a much stronger book than The Madness Underneath, which felt very much like a transition story, to get the readers from the Ripper focused plot in The Name of the Star, to the direction the story has taken in book three.

It is very hard to discuss The Shadow Cabinet without massive spoilers, but I'm going to do my best here. I've clearly marked anything that is a spoiler, and you should also check out my Goodreads review, where I was able to be a little more open, because I could hide more things. Here are my thoughts in five points:

1) This book was less about solving ghost crimes, and more personal, focused on the aftermath of what happened at the end of book two. The story picks up almost immediately after the last installment, and readers see how the characters are coping (see more on Rory in the next point).  The other half of this story connects to the happenings of therapist Jane, whom Rory met in the last book. We see more of what she's doing, and some of it definitely surprised me. Where the series started off as more of a crime-suspense, featuring ghosts, The Shadow Cabinet took a more of mystical or mythological look at the whole death and dying phenomenon.

2) Our Louisiana transplant to London, i.e. heroine Rory, continues to be chatty, though she's more broken in this book, which is very much expected. She's not always the most observant and has some moments of being passive - or conversely doing impulsive things without thinking them through. But I still really like her, and I continue to be charmed by her inner monologues about her family and home. Rory is very much the youngest and the newest to these ghost seeing police. But she is learning, and keeps going forward during some very tough times. Rory also manages to mostly come out all right in the end, despite me wanting to yell at her a few times.

3) This book wasn't as emotionally wrecking as it could have been, but it's also not as emotionally satisfying as I'd hope it would be. Honestly, this would have been a higher rated read, except for this point. After a 2 year wait, I needed more. This part I'm going to talk about more fully under a spoiler tag.

4) As for other characters, we are introduced to Sadie and Sid, who are very mysterious and intriguing people who connect to Jane the happenings I noted in the first point. Rory also spends more time with Thorpe, the MI5 overseer of Stephen's group, and I liked his inclusion. He is duty focused and pretty unsympathetic, but I like that we see him as a bit more human and he helps keep Rory on track. Of course Callum and Boo are around, though I wanted more of them. And we meet a new character, Freddie, who I hope is going to be a great addition to the mix. Also, (SPOILER>>>I really enjoyed the opportunity to get to know Stephen better in this book as well. He is keeping some secrets, and we also get a better sense of his character overall. END SPOILER)

5) The Shadow Cabinet is a much more solid book than 2 was, and I found aspect of the plot surprising and engaging. It's pretty dark in places, though through Rory's voice, I've never felt weighted down by that aspect. She manages a good balance of tones throughout the series. This time, I also didn't feel so much like I was waiting for Rory to mentally catch up to where I was in the story. However, as I mentioned above, after a huge cliffhanger and a long wait, I wanted more emotional satisfaction from this one. This book doesn't end on a real cliffhanger, but it's definitely not the end of the series. Some things are set up for the future. This book definitely widens the overall focus - a lot of the directional transition I sensed in The Madness Underneath, is made clear here.

Love Triangle Factor: Hmmm. I'm going to go with Mild again, but this one is tough. Check the hidden content above and my thoughts on Goodreads for more info on this point.
Cliffhanger scale: Low/Medium. Set up for a future book. But this plot works itself out, and low immediate danger to characters.