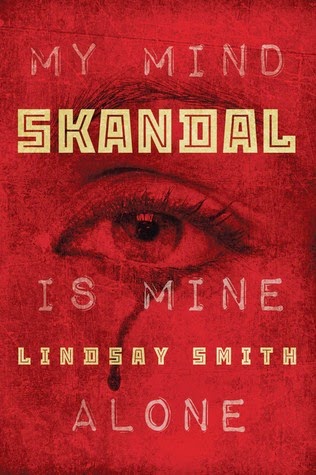 NOTE: Skandal is the sequel to Sekret. See my review of the first book in this duet, as well as the author's blog tour post on the truth behind the locations in the story. My review contains some spoilers for the first book.

At the end of Sekret, Yulia and Valentin very narrowly escape the control of Soviet Russia and are overjoyed at the idea of starting a new life in America. When Skandal begins they have been living in Washington, D.C. with Yulia's father for three months. Yulia is learning English, and Valentin is working for the CIA, where she's about to join him. It's the mid 1960s and America is a very different place from Russia at that time, but still not exactly what Yulia and Valentin were expecting.

One of my favorite parts of Sekret was the intensity and the "caught in a net" sensation that Yulia felt being forced to work for the Soviet government, with no idea whom she could trust - if anyone - and virtually no way to escape, because her captors could read and control her mind. Plus the gritty 1963 Cold War Russia setting with its crumbling mansions, secret railroads and black markets was fascinating. While Skandal didn't have quite the same level of intensity throughout, working for the CIA isn't exactly what Yulia expected either. It is a strange mix of laid back and experimental, but also highly controlled by men and Yulia again finds herself forced into working for a government in ways beyond her control.

What I liked most about Skandal was exploring 1964 America from the perspective of Yulia. She notices the brightness, fast cars, endless restaurants and noise of America, and Valentin becomes immersed in the beatnik jazz scene, finding a home for his love of music. But not surprisingly, America is not a perfect place, and Yulia realizes her new home as not exactly the magical land of freedom and equality she expected. Yulia faces a lot more sexism as a woman, on top of being distrusted because she's a transplanted Russian in a country fearful of Communism. She also watches a highly intelligent friend not receive promotions because of her race. All of this adds complexity to the story, especially in contrast to Russia where she didn't experience the male/female divide as acutely, and where her mother is a very respected Geneticist (albeit likely helping the enemy). I really enjoyed the exploration of these two places in contrast.

Another aspect I enjoyed about Skandal was the relationship between Yulia and Valentin. I'm always fearful that there will be interlopers in a sequel, but I had no need to worry about that here. Their romance continues to build on the foundation of Sekret, and I adored how connected and supportive each is of the other. They truly balance each other out well, and I appreciated that they begin to look at their futures in this installment. There were a few bothersome moments when Yulia's trust issues affect their relationship, but the drama surrounding those sections is not high, and I enjoyed seeing the two of them eventually work through their problems with maturity.

While Yulia is told repeatedly in Sekret, "an empty mind is a safe mind," in Skandal Yulia's motto becomes "my mind is mine alone," and I really like the growth seen in those changing messages. I didn't feel super close to Yulia in this story, and this book didn't elicit as strong feels from me as the first one did. But I enjoyed watching Yulia grow up through the entire series - she is a very different girl than the one we met in the market at the beginning of book one. In Skandal Yulia learns to respect and even value her psychic ability, as well as her abilities beyond her supernatural gift. Sekret remains my favorite of the duet, but I really like that Skandal built on the original story through the new setting, and I was happy with how the series concluded for the characters.

Check back tomorrow when I'm interviewing author Lindsay Smith as part of the Skandal Blog Tour. She discusses gender equality, the truth behind the story locations & love triangles of course.
Posted by Lauren @ Love is not a triangle at 12:00 AM