Release Day: Conspiracy of Blood and Smoke by Anne Blankman 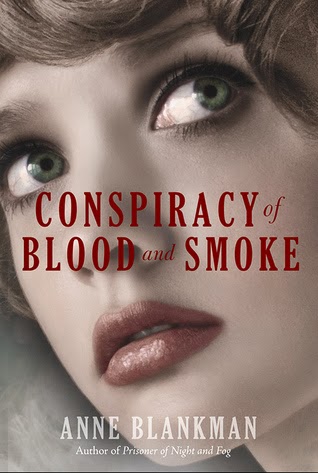 The girl known as Gretchen Whitestone has a secret: She used to be part of Adolf Hitler’s inner circle. More than a year after she made an enemy of her old family friend and fled Munich, she lives with a kindly English family, posing as an ordinary German immigrant, and is preparing to graduate from high school. Her love, Daniel Cohen, is a reporter in town. For the first time in her life, Gretchen is content.
But then, Daniel gets a telegram that sends him back to Germany, and Gretchen’s world turns upside-down. And when she receives word that Daniel is wanted for murder, she has to face the danger she thought she’d escaped-and return to her homeland.
Gretchen must do everything she can to avoid capture and recognition, even though saving Daniel will mean consorting with her former friends, the Nazi elite. And as they work to clear Daniel’s name, Gretchen and Daniel discover a deadly conspiracy stretching from the slums of Berlin to the Reichstag itself. Can they dig up the explosive truth and get out in time-or will Hitler discover them first?
___________________________________________________________________________

I loved every minute of Conspiracy of Blood and Smoke, the the thrilling sequel to Prisoner of Night and Fog. I have fallen hard for this 1930s Germany historical fiction duet, so much so that I'm having trouble deciding which installment I enjoyed better. Though I think it's the second one. I'm also very glad that I didn't grow up during this time period, but have books to transport me there.

Conspiracy begins seventeen months after the end of Prisoner, and Daniel and Gretchen are now living in Oxford, England. Gretchen is finishing high school and living with the family of the psychologist she befriended in Germany, and Daniel is working for the society section of a small newspaper. Although Gretchen is far more happy in her present life, they are thrilled to be safe and together away from Hitler and his growing power. Then Daniel gets an unsettling telegram that takes him back to Germany, and Gretchen is soon to follow. Returning to the center of Hitler's influence and the Nazi's increasing control, Gretchen and Daniel have to rely on their wits and each other, and even then might not make it out alive.

One of my favorite parts of this book was seeing Gretchen's personal growth, as well as the maturity within her and Daniel's relationship. Gretchen is a very different girl from the darling of Uncle Dolf that we met at the start of  Prisoner. But now she is headed back to Germany, the place of her childhood as well as her nightmares, and being confronted with the psychological effects of her relationship with Hitler. Although her journey is not easy, I loved Gretchen's resolve to be different and use that information to help others - and keep her and Daniel alive. I don't know that I could be as brave as she and Daniel are, and I love how much they challenge each other to be better and stronger individuals.

Even when Gretchen and Daniel's relationship is in turmoil they are always supporting each other. Their relationship undergoes a transformation in this book, as they each have to reconcile their individual desires with what they want for their future. These two have had to grow up quickly, and their relationship is a reflection of that. Thankfully this book never dissolves into angst and drama, as they are always fighting for each other even in the moments when they are uncertain of their future together. I cannot get enough of these two, though I don't want them to have any more books, because I want them to have some peace now!

Another favorite aspect of this story is the way this duet has completely transported me into early 1930s Germany. I adore historical fiction, especially when I'm able to experience the time period for myself, and this story did that well. It also spurred me on to do a lot of research on my own, and I loved looking up the characters and concepts and finding out that many of them were real. Before reading this series, I did not know much about this earlier period in Hitler's rise to power, as his influence seeped more and more into the culture. Although it is a terrifying thing to watch - and even more so to live through, I love when a book makes me feel what it was like to live in a time period, and I felt like I got a little glimpse of this time and place through these pages.


Of course with a book set during Hitler's rise to power this story is also an intense and frightening thriller. Especially through the second half, I was on the edge of my seat, very afraid for the lives of these characters I've grown to love so much. Conversely, the first half is a little more introspective, setting the reader back into the world and focusing more on the growth of these characters. I loved the balance of those two sides and the way they worked together to give this story layers of complexity. I cannot recommend this duet enough, and I cannot wait to find out where author Anne Blankman takes readers next.

Love Triangle Factor: None
Cliffhanger Scale: Series end
Posted by Lauren @ Love is not a triangle at 12:00 AM